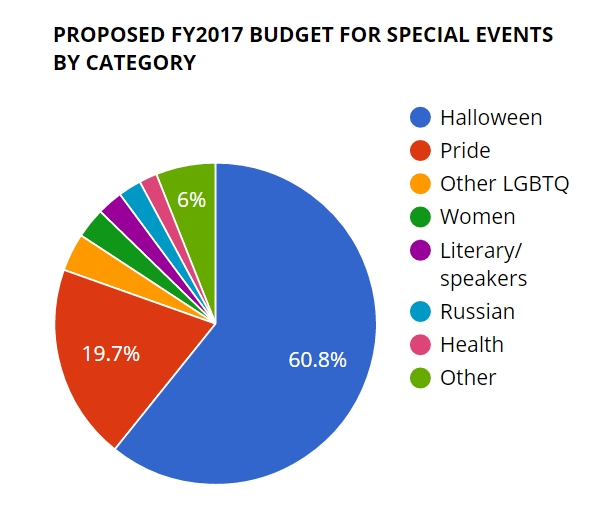 The City of West Hollywood will spend $2.3 million for 42 special events in the fiscal year that begins July 1. That is $66 per resident, not including the cost of staff time devoted to the events. Those numbers come from a WeHo by the Numbers report on the fiscal year 2017 budget.

The report summarizes the spending by grouping the events into categories: 61% of the budget is for Halloween, 20% for Pride, 4% for other LGBTQ events, 3% for events of particular interest to women, 3% for literary events and speaker series, 2% for Russian cultural events, and 2% for health education and screening events. The remainder is for public safety, youth, senior and other kinds of events.

The report does not estimate the cost of staff time devoted to special events. That time is spread across many different city divisions. For example, the Special Events Division spends $1.4 million on its staff. That is separate from the $2.3 million budget for special events.

The new city budget does not provide special-event attendance numbers. In 2011, the city estimated there were about 650,000 attendees, including residents, workers and visitors. Almost 90% of attendees were at the five biggest events: Halloween (400,000), Pride (125,000), the AIDS Walk (25,000), the LA Marathon (25,000), and the Sunset Strip Music Festival (11,000). The AIDS Walk is leaving West Hollywood this year and the Sunset Strip Music Festival has ended.

Homelessness and drug abuse are not just West Hollywood City problems but instead a county and state problem. They should be addressed aggressively by both the county and state as well as the federal government when it applies to our brave veterans which seem to be ignored by our liberal politicians. I would venture to say every homeless veteran in Southern California could be housed and the old veterans facility, “old solders home”, in West Los Angeles. But as i look at the cities budget we have $35,000 being spent on Women’s Leadership; $27,400 on Lesbian Speakers and $21,000 spent… Read more »

being that we keep saying we are progressive city, creative city, one city one pride.
DURAN? $750.000 on ONE trick go GRINDER?

@Larry and @Isa great idea how to push this through?

This is the problem, we have 3 council member that “run” our city. The only hope is our next election, Say NO to Duran, No to HEILMAN. both of them needs to stay home. enough is enough. the other 3 council member still need to show up as leaders that real fight for what’s right for all people, and i mean all people including our people in needs before we spend money on those sex, drugs, drunk events. Time to STOP being “nice”, smile and lie behind our back. They talk so much and do very little. we need council… Read more »

Thank you, Piter
We must wake up, we are not a reality show, we are real people with real life.
and for sure, WE ARE NOT FOR SALE.
I’m so done with the fake “fame” and our corruption in our city, this is crazy.
political correct time is over.
time to talk the truth and look at the facts.
nir zilberman
818 613 8713 24/7

Seems like a no brainier that West Hollywood residents should be entitled to a free pass for the Pride Festival events. Halloween is free, so if the Russian festival, but CSW millks the bank w no accountability for Pride.

Who needs huge events?
Let’s take care of ALL OUR PEOPLE in needs, first.
We can afford PARKING GARAGE of $18.000.000, JOHN DURAN lawsuit $750.000, Special Events Division $1.4 million on its staff, etc.
SHAME ON CITY MANAGEMENT !
80% of our events are low attended. How many affordable housing for seniors and disabled can we built with these millions !!!
Nir is right !!!

West Hollywood started with three issues: LBGT, Russians an Seniors (aging in place). Numbers don’t reflect this. Charge $1 for all non WEHO residents for all events. Why not?!?

and the city forget to spend money to get to ZERO Homeless. Zero AIDS. Zero METH.
WHO NEEDS THOS huge events?
let’s take care of ALL OUR PEOPLE in needs, first.
we can afford PARKING GARAGE of $18.000.000, JOHN DURAN lawsuit, $750.000
and we still stupid to let our leaders spend our money on those event, SHAME ON US!
trust me, 80% of our events are empty, no shows.
METH, HEROIN, SEX, ALCOHOL all event are PACKED.
so sad. west hollywood.
where is our priorities?
fake image!