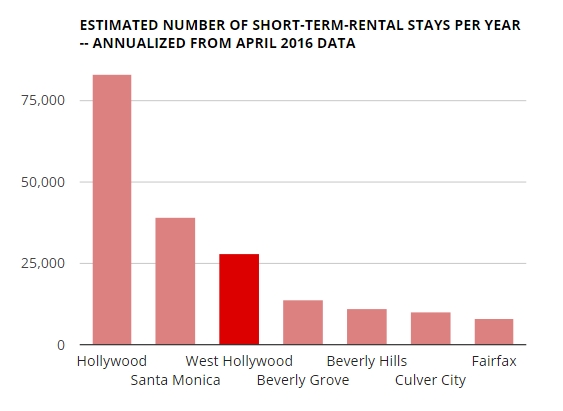 Short-term rentals may have reduced West Hollywood’s housing supply by 400 units. That is according to a follow-up report by WeHo by the Numbers after last week’s initial analysis of data from Inside Airbnb.

The new report estimates that there are 700 active short-term rentals in West Hollywood, listed on Airbnb, HomeAway, VRBO and other services. (The report defines “active” listings as those that received a review in the prior six months.) The number is extrapolated from Airbnb listings by assuming that Airbnb has 65 percent of the market in Los Angeles. That estimate comes from a study by the Los Angeles Alliance for a New Economy.

Those 700 active listings currently generate an estimated 28,000 stays on an annualized basis. 28,000 is a snapshot based on the number of Airbnb reviews in April 2016 and an assumption that only half of short-term renters post a review. Calculations for longer periods of time are complicated by rapid growth and turnover.

Four hundred units is about 2% of West Hollywood’s rental housing supply. For comparison, Census Bureau data shows about 725 units vacant and available for long-term rent at any given time during the years 2010 to 2014.

For the full analysis and comparisons to nearby communities, please see the WeHo by the Numbers article, How common are short-term rentals in West Hollywood?

Stoneman, shouldn’t you take this up with your HOA? Have you passed rules preventing short term rentals in your building? I’ve said this again and again. If you own your home, or multi-family unit (duplex, triplex, etc.), you should be able to do as you please, especially if you live on site. Especially if it is a room in your private home. An outright ban on everything is too much. Property owners should have more rights than that. And I’m not talking about owners of apartment buildings. Apartment buildings should be restricted from being turned into hotels. There is not… Read more »

Hmmm. Personally, I am not into this whole “home sharing with strangers” BUT I am far more concerned about WeHo “local municipal government” attempting AGAIN to try to legislate individuals personal, private, property, or activities that are NOT ILLEGAL under any actual authoritative STATE ELECTED GOVERNMENT and/or is either protected by the US Constition OR the even more protective of individual rights than the US Constitution. I am not aware of any authority or violation of existing Constitutional restrictions etc… I assume many of the WEHO residents who are renting their apts to STRANGERS (personally Yuck) are RENTERS and if… Read more »

Any Councilmember that doesn’t nail down every conceivable aspect of preventing this slippery concept will be assuring the public that they have NO resolve and NO backbone. West Hollywood had become a pulverized town that is quite frankly an expensive, filthy, transient town overrun by economic interests with NO sense of a quality of life. Whoever thinks they are immune to this slow, creeping disease is more foolish than can be contemplated. Up at HPC on 7/25/16 is an attempt to change a small apartment complex on Norton Ave into a B&B in the midst of a residential neighborhood. The… Read more »

It is against the West Hollywood ordinance to rent out your place for less than 30 days, period, whether it’s an apartment, condo, room, etc. I’m all for it. I am a condo owner in a building of 53 units, and I am frustrated seeing strangers come and go in my neighborhood, especially since I’ve lived in my unit for 16+ years. Yes, people need to live somewhere, but my neighborhood is not supposed to be some transient community, no matter how wealthy those “transients” are. I could care less about their income, or what the companies they work for… Read more »

Maybe the councilmembers should reschedule their “retreat” a an apartment complex overrun by air bnbr’s surrounded by an army of leaf blowers to get their attention. Please drag the code enforcement inspectors and head into the retreat as well. They should stay “retreated” until they hammer out a fool proof enforceable plan guaranteed by their personal bonds for a probationary period.

The city won’t enforce the ban on gas leaf blowers, so don’t hold your breathe on short term rentals.

What is the City going to do to stop this???

Again, when will the city enforce the law?