Below is the weekly crime report from the West Hollywood Sheriff’s Station that calls out incidents in WeHo from July 11 to 17. The times are indicated in as Military Time, a concise form in which midnight is indicated as 0000 and noon as 1200. The list also includes the case number. 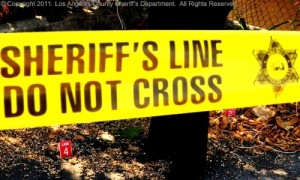 Armed Robbery. 900 block Hancock Avenue. @ 0018. The victim was walking north on the sidewalk when he was approached by a man armed with a handgun who demanded property. Loss $9,000 (watch and phone). #03999

Aggravated Assault. 1200 Block La Brea Avenue. @ 1609. A transient man was hit in the head with a can of hairspray after acting aggressively and asking for money. #04081

Strong Arm Robbery. 1200 Block La Brea Avenue. A man was arrested after he removed a bottle of vodka from the shelf and attempted to leave the store without payment. When confronted by security, the suspect pulled his arm away and threatened to hurt anyone who tried to block his path. #04086

Residential Burglary. 1000 Block Crescent Heights Boulevard. 1700-0018. A man was arrested by deputies after being found inside the residence during the burglary investigation. #04125