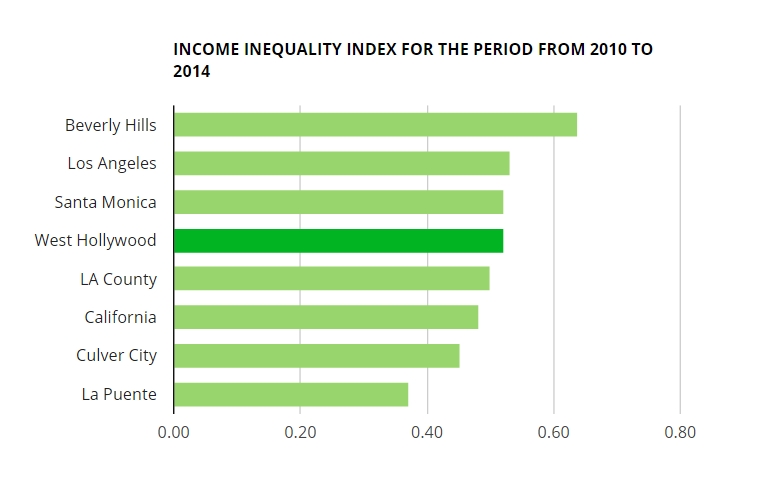 West Hollywood has less income inequality than Beverly Hills but more than Culver City and the county average. That is according to a new report by WeHo by the Numbers based on Census Bureau data.

West Hollywood’s index was also higher than Culver City’s 0.45 and La Puente’s 0.37. La Puente is a city 30 miles to the east which had one of the lowest levels of income inequality in the county and state.

West Hollywood’s index was roughly the same as Los Angeles’ and Santa Monica’s. Beverly Hills, on the other hand, had significantly more income inequality. Its index was 0.64, among the highest in the state.

The report also looks at how much lower-income residents made compared to higher-income residents. West Hollywood’s households were sorted into five equal-sized groups based on their income. The average annual household income was calculated over the same period.

The highest-income group also had the fastest income growth. For details, please see the WeHo by the Numbers article, How much income inequality is there in West Hollywood?

I grew up in WeHo in the late 60’s/early 70’s, it was such a magical and different time, lot of neighbors who knew each other, safe as can be and no one had hedges, fences and gates! lol, it was a fun beautiful lovely place to grow up I feel blessed

This just gives the truth to the lie of WeHo being a “progressive” city. Let’s face it: WeHo is a gay tourist attraction (Kardashians now welcome) living off tax from alcohol, hotel, and parking fines. The already “aged” will soon be gone and we “aging” are on our way out. What’s left is a shell of a “city” destined to become Palm Springs West.

Sadly, you are probably right Larry Block, and that points to the real fact, seniors and disabled have falling way behind, so far behind that they barely affect statistics on inequality. It is sad because what we tell them as a society is that since you can not contribute anymore, you can not participate anymore. Taking a person’s dignity for something they have no control over is a tax that the more affluent will never have to pay.

If the study did not include a) seniors on fixed incomes or retired, or b) disabled persons that zero income. – then the conclusions that are being drawn are NON CONCLUSIVE, or just plain Wrong. – The true inequality in West Hollywood (please run this by the numbers) is that West Hollywood has a larger percentage of those on disability or seniors retired with no incomes then our neighboring cities. When that large subset is added into this mix West Hollywood income inequality will be the highest in the region.