West Hollywood is known for those rainbow flags, including a version hanging from City Hall, that proclaim the city’s support for LGBT people.

But what about those teddy bears (and bunnies)? You know, the ones hanging from power lines all around WeHo. No, they are not a gay version of the sneakers on power lines that L.A. Mayor Jim Hahn in 2003 claimed were signs calling out places to buy illegal drugs. 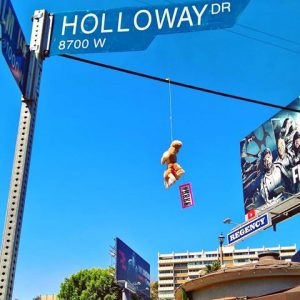 The hanging teddy bears are part of a more inspirational project by Hearts Revolution, an L.A. music duo also known for its glittery ice cream truck, adorned with crystals from Swarovski. In an interview this month in Galore magazine, Leyla “Lo” Safai and Ben Pollock explained:

“We’ve been doing that for like, seven years. Originally it was a way to do graffiti that wasn’t the original poster or sticker, and it would last a little bit longer because it was harder to take down. We left them as reminders to follow through on your childhood dreams and we called it streethearts revolution. We’ve left them in Hong Kong, Tokyo, London, Paris, Miami.

“When you’re a kid that’s your favorite thing, you carry your teddy bear or bunny around everywhere. You have all these hopes and dreams. As you grow up you have to become what people tell you, you have to ‘be realistic’ and hit certain markers and all those wonderful ideas we had get pushed by the wayside because that’s not reality. Having our best friends hanging in the sky on a power line is a reminder of what you wanted to be and what you thought you could do when you thought the world was more magical.”

The story is told in a more musical and moving way in videos (posted above and below) that present Hearts Revolution’s new song “Kishi Kaisei.” The title is a Japanese saying that means ” Wake from death and return to life” — to come out of a desperate situation and make a complete return in one sudden burst.

Safai and Pollack got their start building ice cream trucks in Los Angeles and then started their band. Their signing with a French record label inspired them to partner with a company that had made costumes for Michael Jackson. From that, the idea of a glittery ice crystal ice cream truck emerged.

We’re guessing Southern California Edison won’t find Hearts Revolution or Kishi Kaisei as inspirational as some of us. But you can share your thoughts with the musical duo @RHKK, their twitter account, whose handle is on the hanging teddy bears.

Who takes them down? Is it a city responsibility or utility responsbility?

Wow…very interesting article. Always wondered why these creatures were hanging from the utility wires. You see them in all parts of WeHo!!