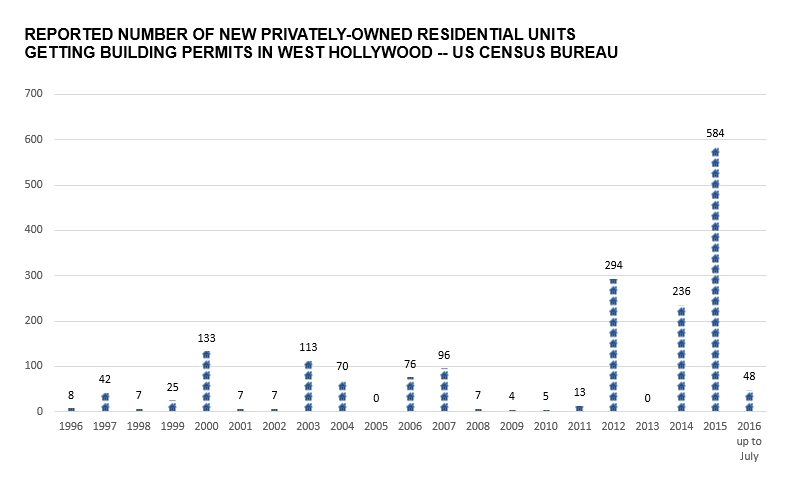 West Hollywood’s housing supply grew by 4% — about 1,000 units – in the last 20 years, with more on the way. That is according to a new report by WeHo by the Numbers, based on state and federal data. The report looked only at the number of housing units and did not consider affordability.

The report relied on annual estimates from the California Department of Finance for the number of housing units in West Hollywood. The estimate rose by 1,034 units from the beginning of 1996 to the beginning of 2016. That was a 4% increase over 20 years. It was a net increase, which accounted for units that were demolished or otherwise removed from the housing supply.

Most years saw a small increase or a smaller decline. In four of the 20 years, the housing estimate went up by about 100 units. One year, 2014, saw the biggest change by far, with an increase of over 400 units. That was 40% of the total increase over the 20-year period.

The report also looked at data from the U.S. Census Bureau. The Census surveys local governments for information on building permits issued for new privately owned residential units. The permits are a leading indicator of new housing. Permits issued in one year typically become finished housing in a later year. Construction can be delayed (or even canceled) and, once started, it takes time to finish.

The permit numbers are only about new housing. They do not take into account housing units demolished or otherwise removed from the housing supply. In two years, there were no reported permits for housing. That could mean no permits were issued or that the Census data is incomplete.

According to the Census, West Hollywood issued building permits for over 1,700 new housing units during a 20-year period from 1996 through 2015. The number varied greatly from year to year. For example, very few permits were reported during the 2001 recession or the Great Recession (starting in 2008).

The last four full years (2012 through 2015) stand out historically. They represent almost two-thirds of the total units for which permits were issued in the 20-year period. The current year has been slower, with permits for less than 50 units through July, compared to over 500 in the same period last year. The city’s housing supply will continue to increase as these projects are completed.

For more information, please see the WeHo by the Numbers report, How much housing has West Hollywood gained in 20 years?

4% growth in units in a totally built up environment like WeHo is actually impressive HuskyDown. And if it were, say, 10%, the same people complaining that 4% is too little would be talking about increased density and find more stuff to gripe about. Some things never change.

Thanks and hope you can follow up on the growth in commercial retail and commercial office space.

Commercial retail and commercial office stats will help clarify what lies at the root of the development or overdevelopment.

It should also prove that the greatest engine of growth we are experiencing is new businesses making their home in WeHo, which in turn cab push up local housing prices because people like to live close to work when they can afford it.

A 4% increase over a 20 year period is pathetic. 200 units a year on average is minuscule. Shows the power of WeHo NIMBYs. This is nothing by to be proud of.

Every new apt. building will be “high end” if you want to call it that. No one is going to build “low end” apts when developers or landlords can command more. Rent and buying real estate are directly connected. As long as a simple cottage costs $1 Million to buy…rent will always be high. Rent prices only started escalating in the early 2000s when the housing boom started. It just never retreated after the market crashed. Once rent is at a certain level..it will never go down. These prices are here to stay folks…no matter how many new apartment buildings… Read more »

Jerome, all the new apartments are high end.

It’s because of a development-mad City Council approving the widespread demolition of historic single family homes, letting them be replaced by condos and apartment buildings. That at least seems to have slowed, perhaps because Lauren Meister and John D’Amico are more sensitive towards preservation than Jeff Prang and Abbe Land ever were. (John Heilman would personally bulldoze over every remaining SFH on his own, if he could.) I am happy that many of the newer mixed-use developments are being built over ugly, underused commercial plots along SMB.

Of course it’s all about MONEY. The more residents we have the larger portion of tax dollars from the State and Feds we can get. The more hotel rooms we have the larger hotel tax income, the more..you get the drift. When the City Council put a moratorium, on condos they discouraged long time residents in favor of rental residents (I’m one). When the real estate owners forced the State to make rent control (“Stabilization”) illegal, rents went sky high, often forcing would be long term residents out of the city. When the City continues to give waivers to property… Read more »

David, very interesting. Maybe an article about the escalation of rents since the demise of rent “stabilization” would be enlightening as well. Perhaps include the number of rents that remain “protected” vs those whose landlords have increased rents to a near gouging level? Just a suggestion.

David Warren can you tell us how many of these new housing units are at the high end of $3600 a month like some of the buildings on La Brea, etc?