West Hollywood took home the following awards:
— The City’s “Keep it Dirty” water-conservation print campaign won a Savvy Award, first place honor, in the category of Printed Publications/Advertising. The “Keep it Dirty” campaign featured provocative imagery with an accompanying suggestive water conservation message that 3CMA judges proclaimed as “…a serious case of knowing your audience…very imaginative and right on target.” Images from the campaign, which featured four distinct ads to encourage community members to use less water, can be seen online. 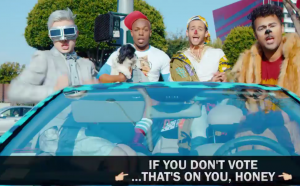 — “Pretty Boys — Get Out the Vote,” the city’s public service announcement that encourages people to go to the polls and vote, won a Silver Circle Award, second place honor, in the category of Most Innovative. The video, which can be viewed online, was developed to encourage voter turnout in a 2015 special municipal election, and features YouTube star Todrick Hall and dozens of local dancers who reference “Wizard of Oz” characters, set to a parody tune of the hit song “Pretty Girl”s by Britney Spears and Iggy Azalea. The video has received more than 1.65-million views to date.

— The city’s Emmy Award-winning drought PSA, “Winter is Here! But the Drought is Far from Over,” won a Silver Circle Award, second place honor, in the TV and Video Public Service Announcement category. The video, which was designed to resemble a mock preview trailer based on the HBO hit series “Game of Thrones,” offers a glimpse of what West Hollywood might look like if the drought continues and we don’t collectively make efforts to conserve water. This PSA also can be viewed online.

The city’s newly implemented Communications and Community Engagement Strategic Plan was recognized with two unique Savvy Awards, first place honors, in the categories of Communication or Marketing Plans and Printed Publications/Other. The city’s Communications Department developed its strategic plan during the course of two years in order to provide West Hollywood City Hall staff members and members of the West Hollywood City Council a roadmap to increase effectiveness in communicating with the public and engaging with the community.

The strategic plan was hailed by 3CMA judges for being “Extremely creative and well executed. A model for other cities.” The plan is packaged in a sleek, easy-to-use and visually appealing boxed set with informational “flash cards,” booklets, and posters — it provides a comprehensive set of tools that help facilitate engagement and effectiveness in communications. As noted by the 3CMA judges, the plan “Communicates a consistent message to all (city) employees, across all departments… in an attractive and easy-to-use way that will have employees reaching for their strategic plan rather than letting it sit on a shelf.”