Hate crimes increased 24% in Los Angeles County last year, the largest increase since 2011, according to a report released today by the L.A. County Commission on Human Relations.

A quarter of those hate crimes were related to sexual orientation, and 84% of those particular crimes involved violent behavior, the highest level in more than a decade. The number of hate crimes aimed at lesbian, gay and bisexual people increased 11% from 108 in 2014 to 120 last year. LGB people make up roughly 45% of West Hollywood’s population, but the hate crime study does not provide city-specific hate crime data.

Transgender hate crimes are included in the report’s calculation of gender-related crimes, which increased 47% year over year. Of 22 crimes in which gender or gender identity was the motivation, 18 involved transgender women. All of those crimes involved violent behavior.

Race, ethnicity and national origin accounted for the largest number of hate crimes overall, with 241 last year compared to 199 the year before, for an increase of 21%. 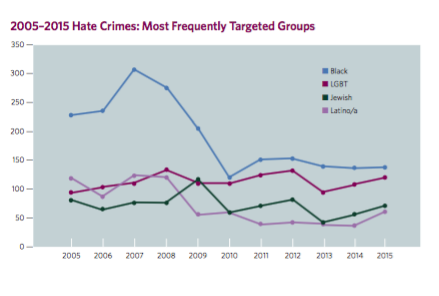 Fifty-eight percent of racial hate crimes targeted African Americans, compared to 69% the previous year. Anti- black crimes increased slightly from 138 to 139. Blacks constitute less than 9% of the total population of Los Angeles County but are grossly over-represented each year as victims of hate crime. As mentioned in the 2015 Hate Crimes in Perspective section, large numbers of these crimes were committed by Latino gang members. Of the 64 Latino-on-black crimes, 47% of the suspects belonged to gangs.

Anti-Latino crimes grew 69% from 36 to 61. Latinos were targeted in 25% of racial hate crimes, compared to 18% the previous year. Crimes targeting Asians increased from 6 to 18. “However,” the report notes “prior to 2007, there were often more than twice as many anti-Asian hate crimes reported each year. Although Asian Americans constitute 14% of Los Angeles County residents, they reported only 7% of racial hate crimes 2015.

“Anti-white crimes declined slightly from 12 to 11. Whites make up nearly 28% of the county’s population but represented only 5% of racial hate crime victims in 2015.”

Here are details about sexual orientation hate crimes from the 2015 Hate Crime Report:

Latin people remained the largest group of sexual orientation hate crime victims (51%), just slightly higher than their proportion of the total population of Los Angeles County residents. Whites comprised the second largest group of victims (27%), followed by blacks (17%). These percentages were similar to the previous year.

In the past, victims of homophobic crime were most likely to be targeted by suspects of the same race. This remained true for Latinos who were targeted most frequently by other Latinos (77%), followed by blacks (18%). African American victims were targeted most often by other blacks (67%), followed by Latinos (33%). But white victims had a more racially mixed group of assailants. Forty-seven percent of white victims were attacked by Latinos, followed by other whites (26%) and blacks (21%).

Jan. 7, Koreatown—A gay Latino man was working out at a gym with a friend. He gave his friend a hug. A few men approached them and started calling them faggots. He responded, “Yeah I am. So what?” The men pushed him and knocked him to the ground.

April 28, Downtown L.A—A white woman was waiting on the platform of a Metro station when she was approached by a black man. He bumped her with his shoulder nearly causing the victim to fall. The suspect shouted, “You might look like a man with your lesbian haircut but that doesn’t make you a man like me.” A train arrived and the victim boarded. The suspect followed her and continued to verbally harass her until she exited the train.

June 30, Whittier—A white lesbian was walking to a store when a vehicle with two Latino men approached her. One of them pointed a gun at her and yelled, “I should kill you, faggot!” The car made a U-turn and then left the area.

Sept. 2, Downtown L.A.—At a county Jail, a suspect entered a cell where a Pacific Islander man was housed. The victim had long hair, painted toenails and wore a tank top and leggings. The suspect told him, “Don’t touch my food, faggot.” The suspect spat in the victim’s direction, starting an altercation. The suspect swung his zzst at the victim. They both fell to the ground and continued fighting until they were separated by jail guards.

Sept. 9, South L.A.—Four gay Latino men were at a restaurant having lunch. Two of them held hands and acted affectionately. A group of five Latino men confronted them. One said, “Hey, where are you from? You bang?” One of the victims answered that he was from “nowhere.” The suspect then yelled, “Get the f–k out of our ‘hood faggot! This is 38th St. ‘hood!” and brandished a gun. The four friends exited the restaurant and drove away. The suspects followed in a car, continued to threaten the victims and pointed the gun at them. The victims sped away and lost the assailants.

Nov. 1, West Adams—A Latina lesbian had been harassed by a black male neighbor and secured a restraining order against him. While at home she heard the suspect yelling, “Come out you lesbian so I can show you what a real man feels like!” She also heard a scratching noise on her front door. Through her window, she saw the suspect walking away with a knife in his hand.

Similar to previous years, all 18 anti-transgender crimes were of a violent nature. The most frequent offenses were simple assaults (44%), followed by aggravated assaults (33%) and criminal threats (22%).

As in past years, the great majority of anti-transgender crimes occurred in public places (78%), followed by single crimes that took place in a residence, business, school and via electronic communication.

Forty-four percent of the victims were Latina, 33% were black, 11% were white and one victim’s race was not recorded. Most of the black victims were attacked by black suspects, but the remaining victims were targeted by suspects of different races.

All of the suspects were male. Most of them were complete strangers to the victims. However, two of the victims were teenagers who were targeted by other students and one of the victims was attacked by a neighbor who lived in the same housing complex.

July 1, Hollywood—A white transgender woman was walking with a friend. A white man who had a history of verbally harassing the victim approached on a skateboard. The suspect yelled, “You f–king faggot” as he held the skateboard in a threatening manner. Then he punched the victim in the face and fled on his skateboard.

July 30, Pasadena—A transgender Latina was walking home when a black male motorist drove alongside her and yelled, “Why are you dressed like that?” and “F–k you mother f–king faggot!” The suspect exited his vehicle and chased the victim. He grabbed the victim’s hair with one hand and punched her twice with the other. The victim suffered a sore jaw and loosened teeth and was bleeding from the attack.

“Fifty-two percent of religious hate crimes were acts of vandalism, followed by intimidation and disorderly conduct (18% each). Disorderly conduct includes displays of swastikas and other hate symbols on private property that are intended to terrorize the owners or occupants. These crimes don’t rise to the level of vandalism because they are easily removable and cause no property damage (for example, a swastika written in chalk on a car). Eight percent were simple assaults and 4% were aggravated assaults.

“As in previous years, there were several cases of vandalism of Catholic and other Christian churches that included pentagrams and other Satanic symbols. It is impossible to know from the available information if the perpetrators were actually Satanists or simply malicious pranksters. Religious crimes in which there was evidence of white supremacist ideology (most frequently the use of swastikas) grew from 26% to 36%.”

Jan. 23, Tarzana—The wall across the street from a charter school was spray-painted with the graffiti, “DEATH TO ISIS,” and “ISLAM WILL BURN 14/88.” 14/88 is a white supremacist code. “14” refers to the 14 words: “That the beauty of the white Aryan woman will not perish from the earth.” “88” is shorthand for “Heil Hilter,” as “H” is the eighth letter of the alphabet.

Feb. 1, Fairfax—A Middle Eastern man entered a synagogue and shouted, “I’m going to kill all Jews”. The suspect attempted to use a stun gun to harm one of the members. Police arrested the suspect.

June 19, Beverly Hills—A Muslim woman was sitting in her car when a white man approached her vehicle and yelled, “I have three hundred friends that were killed by Muslims. You’re a f–king terrorist. You are probably wearing bombs under that dress. Get the f–k out of the country!” The victim denied being a terrorist and the suspect said, “If I ever see you, I’ll f–king kill you.”

July 1, Hollywood—At the entrance to a school a swastika was drawn along with the graffiti, “Kill Jewish Boys.”

The rise in anti-gay hate crimes reinforces my belief that W. Hollywood needs to strengthen their identity as a safe haven for gay people

It is only getting worse right here in our own back yard. At a meeting on August 31, 2016 at the McDonald’s on La Brea Mayor Meister failed to stand up for the trans community when people referred to clients of the Los Angeles Gay and Lesbian Center as “a bunch of African-American transients.” How sad that the Mayor of a City built on inclusion and diversity did not object to this racist homophobic language. Worse, the Sheriff just sat there. Maybe our Supervisor Sheila Kuehl (or her staff) could come conduct some sensitivity training for these women.

West Hollywood has a large Jewish population and your article states that antisemitic crimes have increased 27%, yet you only mention specific anti-gay crimes. How about widening your view and report on the totality, not just have a gay mindset? WeHo has a diverse population, it is not just a gay city.

Oops! That was a mistake. More information about religious hate crimes was supposed to be in the story, and thanks to your message it now is.

This is really sad & disheartening. I hope that those elected officials & others who espouse the “we have assimilated & we can now live safely anywhere” philosophy will be more cautious in the future about encouraging a false sense of security that gay people are “accepted” wherever they choose to go. That is not true anywhere in the world, not even in West Hollywood & it is not likely to be so anytime soon. I don’t even think all gay people accept all gay people. It is more proper to try to educate the public with facts, rather than… Read more »

Well, with apparently half of the voters in this country supporting Trump and all that he stands for, I’m not surprised. If he gets elected it will only get worse. His VP has vowed to roll back as much LGBT-positive laws as he can. I don’t think God is blessing America much anymore–if she ever did.