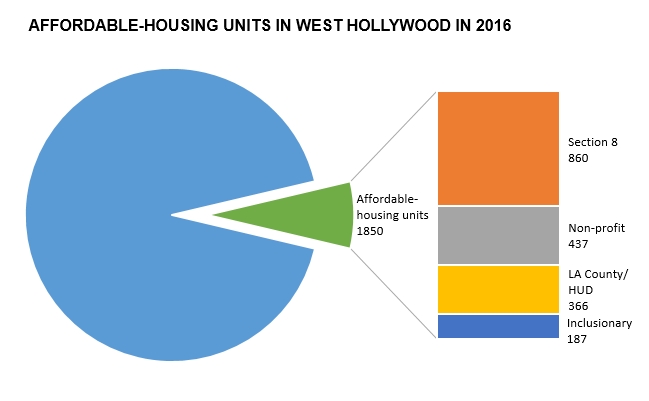 The report lists four types of affordable housing in West Hollywood. The first type is Section 8, a Federal program that subsidizes rents for specific households or for a block of low-income housing units. Section 8 represents almost half of the city’s affordable-housing units (860 units).

The second type is housing provided by a non-profit organization, often with government help. About a quarter of the city’s affordable-housing units (437) fall in this category. Each building may focus on a specific population, such as seniors, people with disabilities or the formerly homeless. The non-profit may provide additional supportive services, such as case management, therapy, or educational programs.

The third type is housing operated by the Housing Authority of the County of Los Angeles. It represents a fifth of the city’s affordable-housing units (366 units).

The remaining 10% of the city’s affordable-housing units comes from inclusionary housing in new market-rate buildings. The city typically requires developers to include lower-income households by setting aside 20% of the units for them at below-market rates. There are 187 inclusionary units today.

To get an inclusionary unit, someone must put his or her name on a waiting list. The lower-income list currentlyis closed, but the moderate-income list is open. A one-person household’s income cannot exceed $59,232 for that list.

The report uses a different term for affordable-housing units (“social housing”) to emphasize that naturally affordable housing is not included in the count. Some units are affordable just because of their size, location, age, etc. It depends on the unit, the household’s income and how long the tenant has been there. Long-term tenants in rent-stabilized units often enjoy more affordable rents than new tenants get.

For more about affordable-housing opportunities for current city residents, see the full WeHo by the Numbers report, How much social housing does West Hollywood have?

Adding on to what SaveWeho mentioned…
GENERALLY speaking if a single dollar of federal monies were used or federal tax incentives were accepted to build a project, then you must consider applications from all over the country. Most affordable units are built using some combination of state and federal money or tax incentives.

Where do the busboys live? Probably at least an hour away along with may other low wage earners in West Hollywood. This is not a town for anybody who earns less than the than the “average” annual income in Los Angeles County of about $45,000 – and that likely includes the greater majority of the 25,000 or so who here daily to work in our shops, hotels and restaurants. Unsubsidised Affordable Housing is a great idea – someplace other than our twon.

@ Alison. If you’re in the business of renting out properties to people…(which is in fact a BUSINESS)…you shouldn’t be able to discriminate even for low income people. How Section 8 works is you pay your percentage of your income and the state makes up the difference. The overall price of the unit is determined by the average price of similar units and is determined by comparable properties. And you’re wrong saying that if someone can afford this or that amount then they should be able to afford their own apartment somewhere else. No one is saying the newest Sunset… Read more »

BUT … The Low Income Units Newly Created are paid for by weho property owners, Our City’s Resources, assets and cost BUT THE LIST IS OPEN TO ALL OF LA. Shouldn’t this program paid by weho be for Existing WeHo Residents. LA (the city) is so huge and can deal with residents wanting LA low income units. WeHo low income units should be FIRST for voting, tax paying, nembers of a community and many need housing help. We can’t house the world, yet many weho renters have lost their long term home, yet weho has a fairly secretive (and apparently… Read more »

Maybe the answer is for Weho to stop acting like this is an issue at all. It’s now oniy about bigger, faster, louder for our city and its council. Enough with the lip service.

How many rent-controlled units are there? Those would have to be considered affordable as well, even thought the tenets might not otherwise qualify for assistance. Somebody is making up the difference.

@Save WeHo – you say Landlords would get their full amount if you made them all accept Section 8. First of all, you can’t do that. It is their property and you can’t make them do what they don’t want to do with their own property. Secondly, what good would that do? With the current rents as they are, no section 8 tenant could afford to live in a high rent building because HUD limits how much help they give for 1 bd, 2bd, etc. The tenant has to pay the difference. If they could afford that, they don’t need… Read more »

What’s important to emphasize is the low-income housing list has been closed for over 3 years. So there are still hundreds, if not thousands, on that list. It might be another decade before the list opens again. The moderate income housing has been open for as long as I can remember. I have never seen any new building accept “moderate-income” folks. And generally…if you make between 47-59k….I think you probably can afford a modest apt. in some capacity. How do we improve this? 1) Hold all new developers to the 20% rule. No buyouts or offering the city money to… Read more »

So basically the term “affordable housing” relates to, if not ONLY to, housing subsidized by government or organizations. What does that say about property owners aka landlords? When the state overruled all cities and made so-called rent stabilization (rent control) illegal, they bowed to the money once again…with no regards for the cities or individual citizens. Unless someone initiated a proposition to put the ability to manage rents on the ballot, this gouging of renters will continue and change the personality of cities..as it has already.