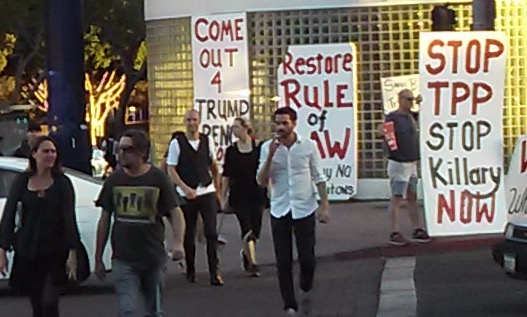 Donald Trump may have been banned from West Hollywood, but his supporters clearly aren’t. 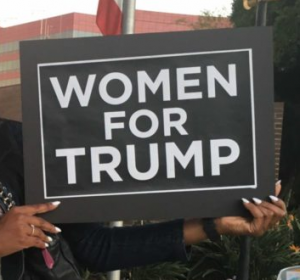 The latest of several Trump rallies occurred on Friday on the southeast corner of Santa Monica Boulevard at San Vicente, the site of a past gathering of Trump supporters.

It wasn’t heavily promoted. In fact, WEHOville learned of it this morning from Breitbart News, http://www.breitbart.com/california/2016/10/23/trump-supporter-compares-donald-to-king-cyrus-says-hillary-clinton-is-jezebel/ the L.A.-based conservative news site whose chairman Stephen Bannon was named CEO of Trump’s presidential campaign in August.

Of the women at the rally interviewed by Breitbart, one said she didn’t like Trump’s controversial comments about women but would vote for him anyway. Another woman decried Hillary Clinton’s support for abortion rights. A third, Christina Ramos, put a Biblical twist on the election. Trump, she told Breitbart, is King Cyrus. Hillary Clinton she characterized as Jezebel, with her husband Bill like King Ahab, who married Jezebel. “She was in cahoots with Babel,” Ramos told Breitbart. “She worshipped false gods too.”

99% of these deplorable goons were from out of the area. Breitbart pumps these people up to invade on private property within West Hollywood with the hopes of causing mayhem that they can then cry foul about. Does anyone think that the owner of the former Citibank was allowing them to use the building as a staging area? Remember the first demonstration when the patrons of Fiesta Cantina “rioted” according to the leader of the Trumpettes. In actuality the bar patrons simply shouted down the deplorables for harshing their buzz. News flash to Breitbart Trumpettes, those “rioters” have a constitutional… Read more »

I'm NOT with her!

Finally some sensible people, unlike biased and hypocritical liberals that ruin everything they touch.

How sad, that these deplorables, don’t see what is to come should this vulgar buffoon Trump be elected. Trump has already said he wanted marriage equality overturned by appointing conservative supreme court justices. As far as biblical, I toss my head back and laugh. Trump has cheated on his wives, been married three times (not that I could care less but I don’t tout religion) and speaks like a literal street urchin. As far as women, I need not even go there. …….Oh , and there of course is that pesky little Russian thing.

So there’s a local chapter of the Profoundly Shallow club? Trump certainly gave them a new leader. No matter, Clinton/Kaine landslide will bury them — and whatever fetal tissue is leftover from the GOP’s self-abortion. Tsk tsk.

Gobsmacked. Trump has said he will appoint judges to control a woman’s body. This isn’t about his sexual assaults, unforgivable but an anti-abortion court is also and anti-equality court. How can anyone overlook those issues? Forget he’s a buffoon, talks first, thinks after the man is a 7th grader mentality. How much can someone hate Hillary. Reagan, before some of these in photo were born, had 8 Embassy attacks with 94 killed. Over $168,000,000.00 of tax money investigating the Clinton’s (mostly lawyer fees) and NOTHING. And nothing happened either. What state secret was shared? What dictator was toppled because these… Read more »