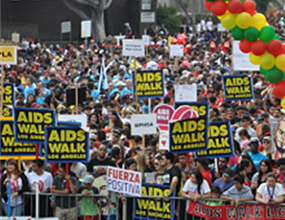 The annual 10k walk began at 10 a.m. today and ended at Grand Park in downtown Los Angeles. Since the first walk in 1985, walkers have raised more than $84 million for APLA Health.

This was event’s first year at Grand Park. In recent years the walk went through West Hollywood.

“The crowd loved the new location, and we loved the crowd,” said Craig Miller, the event’s founder and senior organizer. “The participants were clearly energized by the versatile new venue and all we were able to do with it. AIDS Walk Los Angeles has long been one of the Southland’s most widely embraced charitable events. At Grand Park, it has risen to the level of a major cultural event as well.”

Craig Thompson, APLA’s CEO, said the new location “will better position the event for communities that have often felt disenfranchised, underserved and on the periphery.”

“We are incredibly thankful for everyone who registered, raised funds, participated in, and supported AIDS Walk Los Angeles today,” Thompson said. “The funds raised through AIDS Walk allow us to provide the most critically needed services for people living with HIV and AIDS, such as housing support, health care, and groceries from our countywide food pantry network. They also ensure we can deliver quality medical, dental, and mental health care—as well as HIV testing, STD screening, and HIV prevention tools such as PrEP—to thousands of low-income individuals every year. This combination of comprehensive care for all and support services for those living with HIV will help us end the epidemic.”

$2 million is not a lot of money to raise in 2016 from this one event with all of those production costs around the event. What was the costs incurred to hold and host that event against the $2 million raised this year? They could probably raise more than $2 million online instead.

I think it’s great that a trustworthy organization like APLA was able to raise over $2 million with the walk. I know that all of this money will be spent supporting direct services to people with AIDS and other serious illnesses. There is something I just don’t understand, though, and that is where the heck does AHF’s infamous leader get the right to spend any money on ballot measures. A piece in the Los Angeles Times recently presented an accounting of monies spent on various initiatives this year, as more is being spent on the initiatives from lobbying giants like… Read more »