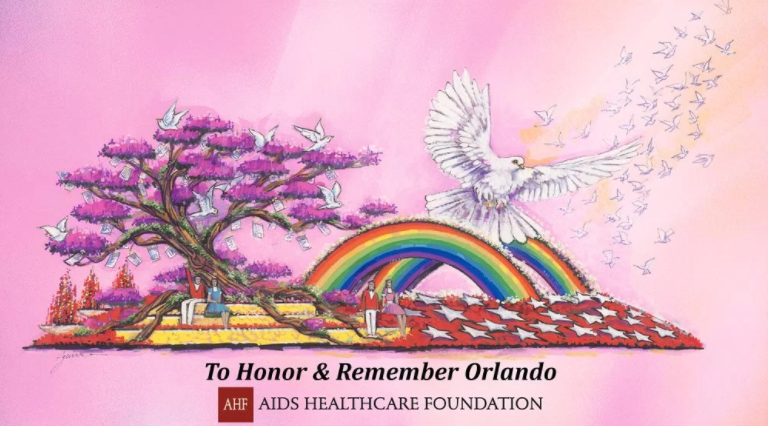 For the sixth year in a row, AIDS Healthcare Foundation (AHF) in partnership with its affiliated organization, Impulse Group United, will take part in the Rose Parade with a float this year that honors the memory of the 49 individuals lost to the violence in the attack on the Pulse Nightclub and LGBTQ community in Orlando, Fla. In a press release announcing the float, AHF said it decided to dedicate its entry in the 128th Rose Parade to honor those killed—as well as survivors, families and loved ones—soon after the June attack. Three survivors of the attack, the owner of the nightclub and several community members involved in the recovery and healing efforts in Orlando will ride on the float, which is titled, ‘To Honor and Remember Orlando.’

In the days and months immediately following the attack on the ground in Orlando, members of AHF’s ‘Impulse Group Orlando,’ a chapter of AHF’s federation of Impulse Groups, worked in and with the community to honor the dead, provide for the injured and work toward salving the wounded spirit and soul of Orlando.

The AHF float features an enormous floral dove—its wings outstretched, representing a dove of peace —flying over a memorial field of 49 white stars over a floral garden, honoring those killed during the shooting. At the center of the float is a colorful floral rainbow, its colors representing the diversity of the LGBTQ community that was targeted. At the back of the float, a “Tree of Life” with notes of condolence and hope taken from the communal Orlando Pride Board will tie the float back directly to the Orlando community. And in a special tribute to those lost, 49 white doves will be released from the float at two occasions during the parade.

Three survivors of the attack, Victor Baez Febo, Isaiah Henderson and Jahqui Sevilla, whose boyfriend was killed in the attack, will ride on the float. Other riders include Barbara Poma, co-founder and owner of the club, as well as four community members involved in the recovery and healing efforts in Orlando: Patty Sheehan, an openly gay Orlando city commissioner; Joel Morales, an HIV testing counselor and lead case worker for many of the survivors and families, and Corey Lyons and Gustavo Marrero, the president and vice president, respectively, of Impulse Group Orlando, both of whom played a significant role in the Orlando community after the attack.

“It will be a privilege to take part in this Rose Parade float honoring the dead, the wounded, the survivors and the family members left behind after the Orlando tragedy; however, we must not lose sight of the fact that this beautiful float also serves as a solemn and sacred reminder to millions of parade viewers around the world that the stigma and discrimination that led to this attack is not over—the fight goes on, and we must be vigilant in speaking out and speaking out against such bigotry, hatred and injustice,” said Impulse Group Orlando’s Corey Lyons.

This will be AHF’s sixth Rose Parade float. AHF’s five previous entries were:

— 2012: “Our Champion,” a tribute to Elizabeth Taylor for her advocacy and work in the fight against AIDS after her death in 2011, which earned the Tournament of Roses “Queen’s Trophy.”

— 2013: “The Global Face of AIDS,” a global salute to AHF patients and medical staff from around the world, which earned the Tournament of Roses “Queen’s Trophy.”

— 2016: “A Girl’s World of Adventure,”which celebrated and sought to empower young girls the world over. Riders include five 10- and 11 year-old girls—three of whom are HIV-positive—from around the U.S.

“When AHF first began contemplating themes for its Rose Parade float entry, we felt a theme of remembrance and tribute in honor of those who were killed or injured at Pulse — and in honor of the Orlando community’s indomitable spirit and extraordinary, life-affirming response toward overcoming the homophobic stigma and discrimination that contributed to this attack—would be fitting for the Orlando community and for AHF’s 2017 Tournament of Roses’ parade float,” said Michael Weinstein, president of AHF. “In fact, the very name of the Pulse nightclub is a tribute to someone lost to AIDS in earlier days of the epidemic: club co-owner Barbara Poma’s brother, John.”

Impulse Group United and Impulse Group Orlando are also taking this opportunity to raise funds and awareness for three charities and funds and make people aware of efforts help survivors and victims’ families of the Orlando attack. They are the following:

The Impulse Group is a volunteer group of active gay men working in collaboration with AHF whose purpose is to promote healthier lifestyles using modern social approaches, often accomplishing this vision through breaking social barriers in communities with such need. Impulse Orlando provides engaging social events, promoting regular HIV/STI testing and services to those most at risk.

Fiesta Floats of Irwindale is envisioning and constructing AHF’s 2017 ‘To Honor & Remember Orlando’ parade entry, as it did for AHF’s previous three entries.

The parade begins at 9 a.m. on Monday on Orange Grove Road in Pasadena. More information and tickets can be found online.

On Monday, January 2, the AIDS Healthcare Foundation (AHF) reportedly intends to release 98 doves during the Rose Parade in Pasadena, California, in memory of the victims of the horrific Pulse nightclub attack in Orlando, Florida. But after being released, these captive-bred birds can wander desperately for days on end—without sustenance or rest—in a frantic attempt to return to familiar surroundings. They often succumb to extreme weather, attacks by birds of prey or other predators, and numerous other dangers. Many of them are lost forever. It makes no sense to endanger and risk the lives of more of God’s innocent… Read more »

I’m sorry – but regardless of the noble sentiment, I find it incredibly offensive for non-profits to spend the extravagant sums of money it takes to put on a Rose Parade float. And for an organization as egomaniacally driven as AHF, who spends millions on literally self serving political agendas, it is beyond the pale to wrap themselves in the trajedy of Orlando while here at home they are sponsoring LA City Measure S (the neighborhood integrity initiative) which will STOP affordable housing development for years. (Despite the rhetoric, almost every affordable housing project needs the zoning variances NII is… Read more »

It is quite beautiful