A committee formed to support challengers Cynthia Blatt and Steve Martin and oppose incumbents John Duran and John Heilman in the March 7 WeHo City Council election has violated state and local election laws according to a complaint by local activist James Duke Mason, who is a backer of Heilman and Duran and a member of the city’s Lesbian and Gay Advisory Board.

The West Hollywood Money and Politics Committee (WeHoMAP) distributed mailers that don’t list who paid for them, which is required by state law, according to a letter from Mason’s lawyer that has been sent to West Hollywood’s City Clerk and the enforcement officer of the state’s Fair Political Practices Commission.

The mailers also do not note that they were “not authorized” by the candidates for whom they advocate. Under the law, independent expenditure committees are not supposed to coordinate their activities with the campaigns of the candidates they are promoting and must acknowledge that in their campaign materials.

The mailer referenced is one that asks “What do developers and lobbyists expect for the $275,000 + they have invested in Councilmen Heilman and Duran?” The mailer states that Blatt and Martin have received a total of only $500 from real estate interests.

The letter from George Yin, a lawyer at Kaufman Legal Group, also alleges that WeHoMAP is violating a City of West Hollywood campaign finance ordinance that requires such campaign materials to carry the names of the three largest donors to the committee. The three donors to date are Bill Resnick, a psychiatrist and philanthropist who was a major backer of Mayor Lauren Meister’s council campaign in 2015, Scott Schmidt, Meister’s former campaign manager, and Rory Barish, a West Hollywood resident. Resnick donated $25,000 and Schmidt and Barish donated $100 each. The letter notes that a campaign contribution report filed on Jan. 28 should have listed Resnick but didn’t.

“…. The Committee seems to have engaged in a concerted effort to hide information from the public and they should bear responsibility for their misconduct,” Lin’s letter states. “This is especially troubling coming from a committee calling itself the ‘Money in Politics,’ committee. Sadly, they failed to follow basic public disclosure rules>

Scott Schmidt said that WeHoMAP was formed as a “general purpose committee,” in other words one not solely focused on one election, and that the requirements cited by Lin are for an independent expenditure committee focused on only one election, such as the WeHo City Council race.

“When we created the committee, our intent was to educate voters in Los Angeles, Beverly Hills and West Hollywood, just as our website and FPPC Form 410 say, and we have continued to do,” Schmidt said in an email to WEHOville. “As long as developers and lobbyists continue to try to influence local elections, WeHoMAP intends to be around exposing the truth about their activities.”

“Local general purpose committees formed within 90 days of an election must review their expenditures at the end of each month to determine their status as General Purpose or Primarily Formed,” Schmidt said, citing the difference between those focused on one election and those on a broader platform. “The committee had no expenditures by the end of January. We will review our status next Wednesday as required by law.”

“I hope you as a journalist can see this for what it is–an attempt to bully those who choose to speak up against the establishment and silence the voices of West Hollywood residents,” Schmidt said.

“Obviously what WeHoMAP is doing is effective, and they don’t want the people to know who’s finding their campaigns and what their plans are for West Hollywood.”

I was voting for Steve Martin until he latched on to Cynthia Blatt and now I’d rather vote for any other two people. It’s sad that Steve with all his experience can’t stand on his accomplishments and history. And today as he tries to discredit Duran while he spent years trying to discredit Jeffrey Prang I’m seeing the highest form of hypocrisy. Look at Steve now, the Gold Medal Champion of losing an Election in West Hollywood.. nobody has lost more elections then Steve..and nobody has lost a re-election in years and years. It’s obvious he does not have the… Read more »

Steve, you too were a work (and I do mean work) in progress during your tenure. Time and time again, you acted in such a manner that you, in fact, never grew beyond the work in progress stage. This is why Steve voters removed you 14 years ago and we the voters, over and over again, rejected you for many- many flip-flops, ethics violations…contemptable behavior of Jeff Prang. Steve, you regularly accepted campaign contributions from big developers and lobbyist. Yet, in true form, you say, as if a weakness, you have done the same. Steve, you talk about the John… Read more »

Cynthia Blatt and Steve Martin bring too much baggage to this election. It’s time for new energy. I am not endorsing the clown commenting in this post. The residents of West Hollywood need to do their homework and be smart about who they choose to represent as our leaders and look for doers instead of talkers. Putting a moratorium on progress will do nothing for the betterment of our community.

For clarification about what is/isn’t legally required by the FPPC re: signage and mailers from candidate controlled committees, please refer to this FPPC document:

I love how #teamheilman and Duran are doing everything they can to divert and pivot from the massive amount of out of town money that are funding their re-election. And minimizing the HR mess Mr Duran made in hiring a man he slept with with out disclosing that to the city’s HR 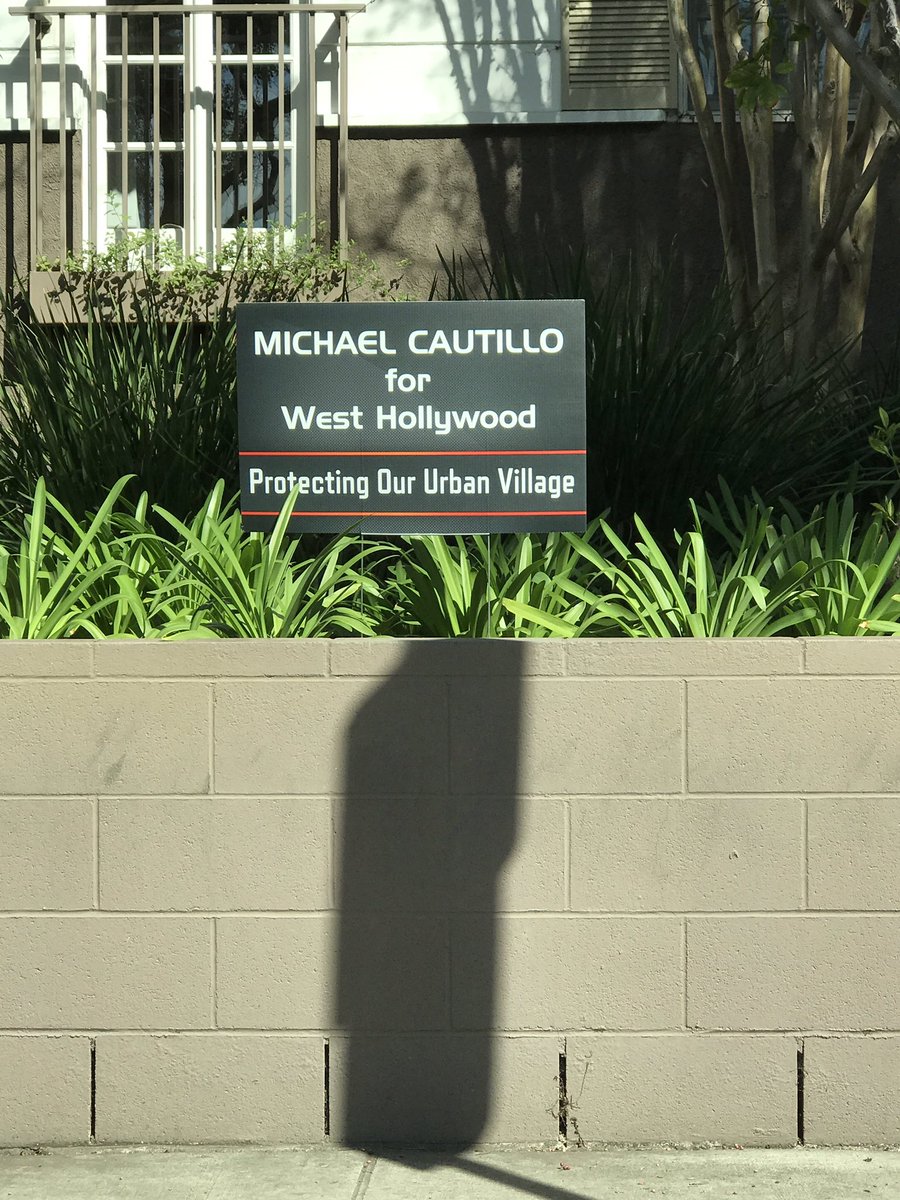 This is Michael Cautillo lawn sign which law requires printed on the sign “Paid for by …. and a account number. This is his lawn sign without any legally required account information or I.D. number. This is a violation of law yet he states above that he has not “violated any Laws (campaign or otherwise.”

Fellow residents please choose wisely on March 7. This is a requirement of all candidates to legally show they are paying for lawn signs or window signs, literature mailings with campaign funds that is on file with the City Clerk.

Right or wrong, THE TRUTH HURTS huh? Blatt and Martin for the win!!! Development doesn’t have to stop in WEHO but we don’t have to have projects on every street and bulldoze history ……AND it should be illegal for our council to take donations from their Developer cronies then turn around and approve all of their projects. SO SHADY!!!!

While most affected officials are extremely reluctant to say much of anything pending resolution of the conflict, Fred Lamont of the County Housing Authority was extremely outspoken while addressing the Lompoc City Council last week. When asked why he thought Lompoc Housing was excluded from the audit, Lamont said he thought it might be because Ehrlich and HUD auditor Cynthia Blatt were close personal friends. Blatt was out of her office until later this week and not available for comment, and the coworker to whom she referred calls in her absence did not return calls for comment.

I hope I can count on your votes! I am running a campaign for POSITIVE CHANGE, have not accepted any donations from developers and have not been accused of violating any laws (campaign or otherwise). Vote for MICHAEL CAUTILLO on March 7th.

Another ethics violation from Blatt! She was also involved in the largest ethics scandel to hit HUD in years –housing and urban development where she works and that can be found by searching her name with the word scandal. This woman is a private citizen with more baggage and more egregious baggage then council members serving 20 years!

Wow DUKE Mason total #teamheilman/duran player wasnt to supress info about where the money is comming from for both Duran and Heilman? What a suprise? And Duke has such potential when he ran to be a reformer and lost. His votes total was 307. In the bottom three.. But then he crossed over to the same team he was critiquinge for high meter costs and our dying gay city as he becomes genderfied Read his article here and watch what he was saying in his run here http://www.huffingtonpost.com/james-duke-mason/paradise-lost-how-gay-mec_b_6616956.html
https://youtu.be/LZismzE2ZDI

Just in case nobody noticed, so far, Duran is running a very positive campaign highlighting issues or accomplishments or endorsements and the others are running on a ‘hes bad’ platform.