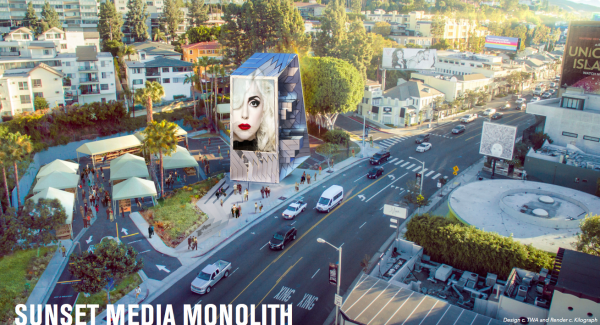 The City of West Hollywood will present next its proposal to revise regulations governing signs on Sunset Boulevard to permit as many as as 18 additional billboards over the next 15 years, of which 17 could be digital billboards. In addition, three existing billboards would be allowed to convert to digital. There currently are 89 billboards along the 1.6 miles of Sunset between Doheny and Havenhurst known as the Sunset Strip.  There also are four digital art signs.

The proposal will be presented for discussion at a community meeting from 6:30 to 7:30 p.m. at the Horn Plaza Community Room at 1230 Horn Plaza, a condominium building that sits at the end of Horn Avenue above Sunset Boulevard.

The Sunset Strip Off-Site Signage Policy would amend the city’s current Sunset Specific Plan, which governs development in the area. A report from the city’s Community Development Department says “the amended policy includes standards and requirements for permitting a limited number of digital billboards and for limited opportunities to convert existing traditional billboards to digital billboards on eligible sites. In addition, the amended policy language allows for modifications to existing signs for changes to height, orientation of sign faces, or pole location. The policy also allows for limited modifications of allocation of sign area for existing tall wall signs.”

More billboards mean more street trees that either get cut down or illegally trimmed in the middle of the night!

the problem with the digitalized billboards is that as you are driving up Sunset Blvd., the lights are so bright and the content so confusing that they become a traffic and accident hazard. I can’t imagine anyone living around the signs that would want this in their living room window flashing in and out. Why would this make sense to anyone other than the billboard companies?

The meeting is tonite at 6:30pm at 1230 Horn Plaza condos in the recreation room.

This meeting is pretty shady. It’s not ADA accessible. It’s not on the City Calendar. Who’s putting this meeting on, anyway? Why isn’t it listed anywhere but on this blog? Either this meeting satisfies some public notice requirement that the city wants to toss under the rug, OR it has nothing to do with the City of West Hollywood. Please advise Wehoville staff, otherwise we think it’s your invention.

Hello Community Development!!! Could you please reschedule this meeting in a public place? Council Chambers for instance would be fitting given the magnitude of the issue.

Park for the meeting? Perhaps the city is expecting attendees to Uber over. Not so funny. A well disguised meeting with a tricky approach to the public.

Excuse me but where are we supposed to park for this meeting? Why can’t the meeting be held in a regular meeting room so the public will have access? Are these billboards for the public benefit or is this just pay back time for all those campaign contributions?

More billboards, more money. Who cares about what the residents want.(the ones who pay the bills).More money for more low income projects. Wondering where your loyalty lies?

About twenty years ago the Society for Historic Preservation labeled Sunset Blvd in West Hollywood as one of the ugliest streets in the country – because of its proliferation of badly designed signage and thoroughly cluttered appearance. What would it say today? At leasty it’s not the Ginza.

Well, here is a meeting the City of West Hollywood doesn’t want you to attend, if you are a senior or a disabled citizen, this meeting is at the top of the hill after the Cityline stops running excluding half of the city from this meeting, thanks City Hall! Shame on you for not having this meeting at a more accessible location!

The architecture of most new buildings looks like they belong in East Berlin before the wall came down.

The billboards only sell one thing the grim reality that two old white guys run WEHO. They got reelected by being streetwalkers for the sign companies that backed their campaigns.

Face the facts; Hicks run WEHO, evidenced by the “Planning Commission” appointees with artistic abilities acquired in an arts and crafts course run by Angie’s List.

What is the date of the hearing at Horn Plaza? You list the time but not the date…

@Andrew. Note that the first sentence of the story says the hearing is next Tuesday, which would be April 18.