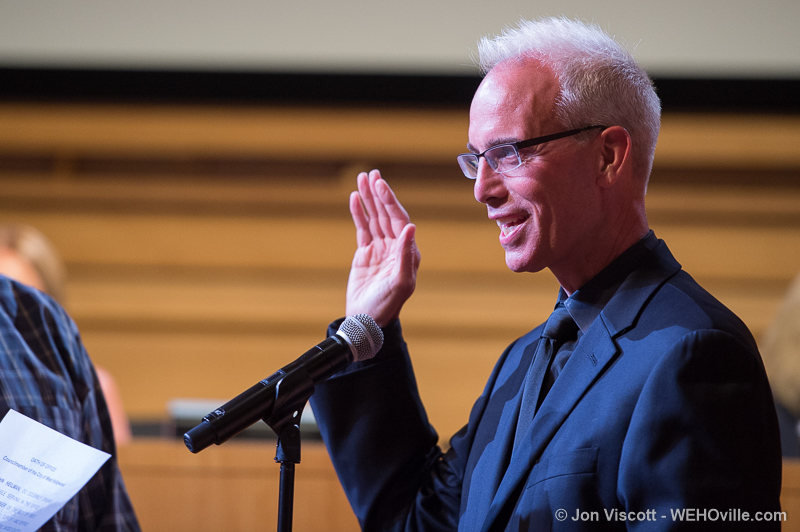 Testimony in a trial that has brought back into the spotlight the misbehavior of a politically appointed group of city employees and the tawdry behavior of one of West Hollywood’s City Council members ended today, with the judge saying he would send Michelle Rex vs. the City of West Hollywood to the jury tomorrow.

Today’s witnesses included John Heilman, WeHo’s longest-serving City Council member and current mayor, and Fran Solomon, who served as his deputy for 23 and a half years until she retired in 2015. Also on the stand was Corri Planck, deputy to former Councilmember Abbe Land and now with the city’s Social Services Division, who testified about the politicization of the deputy system.

Rex’s attorneys also brought forward an economics consultant to calculate the economic impact on Rex of the City Council’s decision in June 2015 to eliminate the 30-year-old deputy system. That decision cost Rex and three other deputies their jobs. Rex alleges that the decision was retaliation against her for defending her friend and fellow deputy Ian Owens.

In January 2015, Owens sent an email under a fake name alleging that Fran Solomon had been electioneering from her City Hall office. WEHOville’s revelation that Owens was the person behind that email, which included details of private conversations Solomon reportedly was having on her office telephone, got him suspended and prompted the city to launch an investigation that turned up multiple stories of alleged misbehavior by council deputies and allegations by Owens that he had been sexually harassed by his boss, Councilmember John Duran.

During the trial Rex’s lawyers have tried to convince the jury that her claim of retaliation is true, noting that her deputy position was eliminated and that she wasn’t considered for another job at City Hall. The consultant they hired estimated today that losing the job would cost Rex slightly more than $1 million over ten years. That calculation was based on anticipated pay increases in the city job and also an assumption that it would take Rex 10 years to work her way back to her City Hall salary, which was $153,729 including insurance benefits and city contribution to the public employee pension fund. Rex is seeking a reported $3 million in damages from the city for emotional injury and lost income.

The attorneys, Mark Quigley and Jana Moser, also have woven into testimony before the jury the story of Duran’s brief sexual relationship with Owens, followed by his hiring of the young man for a well-paid deputy job. That story included lurid allegations by Owens that Duran showed him photos of naked men who he had had sex with and about his visiting a place for anonymous sexual encounters. It also included display before the jury of an email message in which Duran made a derogatory comment about the sexual organs of a prominent female community activist.

In response, the lawyers representing the city, Steve Rothans and Jill Williams, interviewed city council members who said the elimination of the deputy system was not an act of personal retaliation but was a measure taken because of its obvious problems. The problems cited by Heilman today and other council members during earlier testimony included bickering between the deputies, interference by some of them in the work of city staff, efforts by some of them to campaign for their bosses and poor response to calls from local residents. Duran, Heilman and Horvath also noted the difficulty in effectively managing the deputies, given that the council members have other full time jobs and that it is very difficult for the city manager to exert authority over deputies who report to the council members who have the power to hire and fire him.

Rothans also challenged the assumption about Rex’s loss of future income. He noted that Councilmember John D’Amico, Rex’s boss, had testified during the trial that he didn’t plan to run for re-election in 2019. That meant her at-will job might have been eliminated when a new councilmember took office. During the trial Rothans also has quizzed Rex about why she didn’t apply for other city government jobs in Los Angeles County. Williams noted that she waited many months after losing her deputy job before submitting an application to be put on a list of former City Hall employees for consideration for jobs.

Rex said she did look into a city government job in Santa Clarita but didn’t actually apply. She said she thought the fact that she was closely associated with Owens in what became known as “Deputygate” meant it would be hard for her to find another job. “I was called notorious. I was called overpaid. I know I was called a bitch,” she said. “There was the implication that I had brought politics into City Hall, that I was conspiring with Ian Owens.”

Rex said she is trying to rebuild the campaign consultant practice she had before John D’Amico hired her as his deputy in 2011, shortly after she helped him get elected. She has worked with campaign consultant Darby Levin on former L.A. City Planning Commissioner Robert Lee Ahn’s runoff campaign against state Assemblymember Jimmy Gomez for the 34th Congressional District seat. Rex said she also assisted the campaign of Cynthia Blatt, who made an unsuccessful run for the West Hollywood City Council last March.

In her testimony, Solomon, now retired, praised Heilman. “He’s an educator, and so I learned a lot,” she said. “I was taught about public service. I like his academic vent, I like his sense of humor. He created a really great learning environment. And I love his values.”

Solomon disputed a claim by Owens that she had outraged him by asking him and other council deputies to push real estate developers to make big contributions to the West Hollywood Community Housing Corporation, a nonprofit focused on building low-income housing. Solomon said she suggested that they approach “organizations and businesses that had worked with the city before, people and organizations that had expressed a desire to raise funds for affordable housing, those were part of the suggestions that I made.”

Solomon said that her relationship with Rex was “awkward and tense. We didn’t exchange words very much.” And she said Owens eventually stopped communicating with her as well.

Rothans effectively contested a claim by Owens that he had heard Solomon making calls in November 2014 from her City Hall office to raise money for Heilman’s 2015 re-election campaign, getting her to note that she was out of the office during November on medical leave.

Heilman testified that Solomon confessed that she had made or taken inappropriate telephone calls from her office to encourage people to show up for a photo shoot for his campaign. He said City Manager Paul Arevalo told him about that and that Solomon’s pay was docked for two days.

Heilman also acknowledged to Quigley that in a performance review they told Arevalo that he needed to “exercise greater authority over deputies.”

He said Arevalo had a “disengaged” style and that there was a perception that there existed a “Team Paul” in City Hall and that people who weren’t on that team “were ostracized and held back.”

However, Heilman said, Arevalo “was put in a very difficult position — we do this all the time — where we as a council tell him to control this matter, but we are not giving him the tools to do so.”

Lawyers for both sides will make their statements to the jury tomorrow morning, after which the jury is expected to quickly begin deliberations.

The part I enjoy most about this little soap opera is the absurdity and self-importance of Ms. Rex. Replacing an entire segment of City Hall employees based on a cabalistic retaliatory act that was her basically expressing an opinion? Good night nurse. I don’t know this woman but I would have to be many DSM-V syndromes to make myself this pivotal in a sex scandal in a small city government. A scandal in which I personally had no part. It makes me wonder who colluded with her on this frivolous lawsuit and how they planned to cash in and spend… Read more »

A.C.Neighbor – Some of us are grateful for Larry’s reports and his perspective. How sad it is someone posting anonymously (which is all of our right of course, but still) tries to suppress someone doing us a service from posting. It’s pathetic and loathsome for you to do this. It really shows how those who have the anti-council derangement syndrome hate it when someone presents a version of reality that doesn’t conform to his or his closed mind.

Larry’s perspective parallel to Hank’s is invaluable. Your comments are disgraceful.

West Hollywood has become a laughingstock due to the sleazy, corrupt shenanigans of various council members and its eccentric government. WeHo’s leadership has turned it into California’s capitol of overdevelopment, graft, traffic jams, pedestrian injuries, armed robberies, aggressive homeless people, filthy streets, snotty cops, goofy causes, overpriced real estate, and self congratulatory parades. So glad I fled this cesspool! I hope they show Rex the door without giving her a penny.

Mr Block, why or why do you recap things with your editorial comments over and over. Anyone who has read even one of your comments, knows with whom your sentiments lie. Are you a retired federal or state or any kind of judge? It just seems odd that you present this blow by blow – as you see it, with comments, and a constant tribute to the Sitting council members. I can guess why you do it, but we get it. We know who you like and support and whom you don’t, and the why is pretty obvious too. So… Read more »

The first two comments here are emblematic of a “beat the dead horse deader than dead”philosophy that will never strike a positive note in moving our city forward. It’s wrapped in hate, resentment and negativity. Those are hopeless attributes that will eats one from the inside out.

Day 9: Rex vs. City of West Hollywood 2:05pm Plaintiff rests. 3:36pm Defense rests. Closing arguments in the morning. The day began with ‘expert’ testimony calculating Michelle Rex’s losses over 10 years because she lost her job. The Plaintiff was attempting to discuss damages as a way to influence the jury. But the defense was marvelous in its approach. a) D’amico testified he was not going to run in 2019, so any potential damages are not ten years out. and there are term limits. They didnt prove their case but they were calculating her damages. John Heilman took the stand.… Read more »

Mr Duran could of done the honorable and ethical thing way back when and stepped down, for the HR mess of a ball he set it motion. But we continue to have our city’s name dragged through the mud and a bright light shined on a gay elected official that dances on the line it’s a gay thing., or about sexual liberation in our city’s culture In the private sector he would of been terminated. And weho-wille is the second force that spun this ball faster and faster, and no we have no deputy’s which is clear was an effort… Read more »

Seems strange we could have such a dysfunctional and corrupt deputy system when we have such dedicated, intelligent, mature and selfless Council members. Somehow these greedy, petty, immature deputies served for years and of course their conduct has nothing to do with the attitudes and sense of entitlement of the Council members themselves. Whether or not Rex has a valid claim against the City is almost beside the point. Fran Solomon knew her electioneering was wrong and her boss knew it has happening; yet the City Manager was focused on pursuing criminal “eavesdropping” charges against a whistle blower; Solomon got… Read more »