Faced with dozens of letters in opposition and a crowd carrying signs saying “voluntary,” the West Hollywood City Council last night quickly yielded to owners of condominiums who demanded it not require them to protect their buildings against earthquakes.

The letters, many of them from owners of units in the celebrity-famous Sierra Towers on Doheny, cited the high cost to them of preparing their building for safety before the next, and inevitable, earthquake. 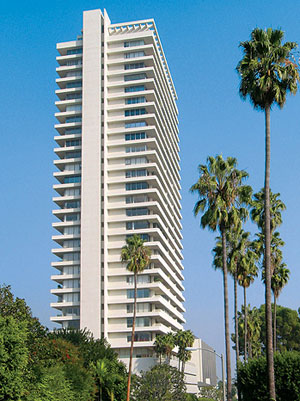 Jim Goodrich, who identified himself as a resident of Sierra Towers, said the cost to condo owners would be as much as $600,000 to $1 million per unit. Recent real estate listings show two-bedroom, two bath condos in the building available at prices from $7 million to $5 million. Goodrich said his estimate includes what he estimated as $31 million in basic construction costs allocated over the 145 units, plus $200,000 to remove existing asbestos, $80,000 for rent elsewhere while construction was being done and $100,000 to $500,000 “to repair high-end finishes” inside the condos damaged by the work.

Objections also came from owners of condominiums in buildings such as Doheny West, the Plaza Towers and Shoreham Towers, among others.

The residents argued that their buildings had suffered little or no damage during the 1994 Northridge earthquake and that the decision to protect themselves from further danger should be “voluntary,” thus the slogan on their signs.

The City Council agreed in April to require so-called “seismic-retrofitting” for wood-frame buildings with soft or open front walls such as those with first floor “tucked in” parking areas. It asked city staffers then to return with more information on a proposal to require strengthening of non-ductile concrete and steel frame buildings. “Non-ductile” refers to brittle concrete that isn’t reinforced with metal mesh or bars.

A report to the council from the city’s Community Development Department noted that it is looking to “provide alternatives to the mandatory ordinance for non-ductile concrete and steel moment frame buildings while at the same time maintaining the intent of the ordinance which is to increase life safety and minimize building damage in the event of a major earthquake.” The report said the department hopes to return with alternatives this Fall.

“Although we have experienced major earthquakes in Southern California such as the 1971 San Fernando Earthquake and 1994 Northridge Earthquakes, these earthquakes were far enough from the city that they did not have a high shaking intensity to significantly damage buildings in West Hollywood,” the report said. “The city was fortunate in these instances, however according to the USGS (U.S. Geological Survey) there is a high probability that a significant earthquake could occur in the West Hollywood area with high shaking intensity.”

Councilmember Lindsey Horvath moved that the city’s Community Development staff return to the council with an ordinance exempting condo buildings from taking the required safety measures, which was approved by a unanimous vote.

While owners of expensive condos will get a pass, owners of the 780 “soft-story” apartment buildings in West Hollywood have until 2023 to retrofit them to protect them from earthquake damage. Such retrofits could require four steel frames for a total cost of about $160,000 per building. The City Council has asked that a consultant study whether building owners should be allowed to pass some of the retrofit costs on to a building’s residents. No state or federal grants are available for seismic retrofits, but a few companies do offer loan programs.

this decision by city council occurred a while ago, but the relevance and potential danger in light of recent events brings it to the forefront of my memory. I attended the council meeting with all the wealthy tenants dressed to the nines in council chambers was as hideous as their demands to skate seismic retrofitting. their stupidity and shortsightedness hidden behind the ferragamo eyeglasses, gucci suits and spray on tans walking out of council chambers with smugness after they had gotten their way with the city. in light of the recent 8.0 earthquake in mexico city this week, the loss… Read more »

I’m not sure, but it’s old enough to have survived the 1972 Earthquake, and the 90’s bigish one, Earthquake Insurance for condos is a very complicated issue with no blanket requirements can fit all condos (big/small, bedrock/landfil, price and deductibles can make some condos not financially possible.

The Northridge and Sylmar quakes should not be looked to as guides to what will happen in the Big One, a 7.8 or larger on the San Andreas fault. Look at shake maps and see what will happen in LA and the WeHo area where the shaking intensity will be at its highest. Poor foresight and poor insight equal bad planning.

Any building “exempt” should be listed in a file readily available to residents so they know what they are getting into should they seek to re/locate into one of them.

I can’t imagine a more irresponsible decision by the council.

Wonder if residents of Sierra Towers and like buildings have a unanimous vote, or does the HOA rule. A cascade of issues especially after potential damage.
Let the lawsuits begin.

Those folks have made millions on their places with the rising values, if they think the money is more important than their safety, then perhaps they should think of their children etc. And they should be responsible for the aftermath should it collapse. Sad the rich can “sway” officials so easily.Money talks…

This is shameful. Are they exempt from fire and other safety codes? In the event of an earthquake, I suggest that first responders respond last to these buildings.

A case of short-termism is all.

“$80,000 for rent elsewhere…”
I know rents are high, but this makes it sound as though these folks are taking out a suite at the Century Plaza.

I’m not clear on this. Do low rise condo owners with soft story tuck under parking get a pass too, or just the high rise condo owners are exempt from strengthening non-ductile concrete and steel frame building?

Wrong move City Council. All buildings need to be retrofitted. Not only are these skyrise condos endangering themselves…but they endanger the homes around them if something should happen…and then the added cost to fire and safety to come rescue them when an earthquake does arise. Some type of funding should be made available to the residents. But my guess is if you can afford a 7 million condo…then you can afford to make it safe. Whether it be through lumping the fee into an existing mortgage or some other kind program that lets them make payments over a time. Its… Read more »