In the first article, which can be seen here, the city explains the complexity of the situation and puts it in the context of the principles on which the City of West Hollywood was founded. This article describes the work down by the city’s Human Services & Rent Stabilization Department, which includes the Housing & Rent Stabilization and Social Services divisions. Both play important roles in the city’s Homeless Initiative.

While WEHOville welcomes comments from readers, in this case we won’t accept comments until the last piece in the series is published on Thursday. That’s in the hope that readers will take the time to read the entire series and then ask better informed questions and make better informed suggestions.)

The city’s Social Services Division currently has contracts that provide shelter beds, outreach services, substance abuse treatment, food and nutrition programs, case management, job training and placement programs and more for West Hollywood community members who are homeless. In addition, this division oversees contracts and agreements with several agencies to assist in the prevention of homelessness through legal intervention and financial assistance.

— Step Up on Second had 94 unduplicated outreach and assessment contacts, and completed CES packets with 36 of those. Two of its clients have moved into permanent housing, with three others searching for housing with their secured FHSP vouchers and an additional three clients matched with project-based units.

— The L.A. LGBT Center’s Youth Center had 1,518 contacts (some are duplicated contacts) with West Hollywood-affiliated youth. They completed 132 intakes/assessments of those youth and provided 1,603 bed nights to 23 unduplicated youth.

— Tarzana Treatment Centers and A Safe Refuge provided detox and residential treatment to 36 unduplicated West Hollywood community members who were previously homeless in the first three quarters of this contract year.

— Homeless prevention is also a vital part of the Homeless Initiative. To that end, 36 West Hollywood residents accessed the rental assistance program administered by the National Council of Jewish Woman (NCJW), enabling them to stay in their rental housing. An additional 95 residents received rental assistance through Aid for AIDS.

— Housing Works is providing case management services for 20 clients who were formerly homeless in West Hollywood. Of those 20 people, 18 are currently housed through the Continuum of Care (CoC) program. Housing Works is assisting the two others who have secured CoC certificates and are currently searching for housing.

In addition to the more than $4.5 million allocated from the city’s General Fund for social services contracts, the city has been able to secure additional resources to assist in this work. West Hollywood has been awarded 20 Shelter + Care (Continuum of Care) vouchers to provide housing and wrap-around supportive services and seven additional Section 8 vouchers specifically for homeless community members. The city also receives a small allocation of CDBG funds (approximately $35,000) that are utilized by Ascencia.

The Social Services Division also oversees an agreement with Brilliant Corners to administer $25,000 in funds that the West Hollywood City Council allocated to rapid re-housing programs. These funds were approved as part of the city’s commitment to Los Angeles County Homeless Initiative strategies.

With the funds from the “WeHo Gives Back” parking meter donation during the winter holidays at the end of 2016, staff was able to purchase emergency supplies for our street outreach teams, including sleeping bags, hygiene kits, food and water. The City Council has also approved a parking meter donation program that will accept donations to support homeless services and increase community awareness about the city’s Homeless Initiative.

As it has since 2005, the city’s Social Services Division continues to convene the West Hollywood Homeless Collaborative, comprised of social services and public safety agencies and other key stakeholders. City Council and city staff will continue to represent West Hollywood as part of the Los Angeles County Homeless Initiative. We are linked with LAHSA (Los Angeles Homeless Services Authority) for the implementation of rapid re-housing programs and are part of the Westside Cities Council of Governments (COG) working group on homelessness. 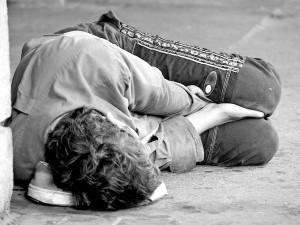 The availability of affordable housing has been identified as a top priority in addressing homelessness. In West Hollywood, and throughout Los Angeles County, this remains a significant barrier with increasing costs and extremely limited availability. Los Angeles has a 2.6% vacancy rate for rental housing, lower than New York and San Francisco.

The division has allocated funding to study innovative housing finance, and is preparing to bring forward plans to increase outreach to long-term senior renters who may be in need of services and support. The division is also preparing a tenant habitability plan to ensure in-place tenants are not displaced or forced from their housing when major renovation, seismic retrofitting occurs in their buildings.

The Housing and Rent Stabilization Division is also exploring the development of landlord incentives to increase the availability of affordable housing and the ability to use existing housing resources, such as Section 8 vouchers and Continuum of Care vouchers.

The city is also working to inform West Hollywood landlords about Homeless Incentive Programs available to property owners who accept tenants with a voucher issued by HACoLA. The city’s RSH staff also participated in the planning of a HouseLA event, in partnership with L.A. County Supervisor Sheila Kuehl’s office, to recruit landlords to participate in this program. Postcards about this event were mailed to landlords in West Hollywood, and information was included in the RSH newsletter.

The Housing and Rent Stabilization Division continues to work closely with the Social Services Division and the city’s contracted providers to protect tenants from eviction by providing education, intervention, and support for residents to address behaviors that could threaten their housing.

TOMORROW:  What the City of West Hollywood’s Public Safety Department  and the West Hollywood Sheriff’s Station are doing about homelessness.

What they should be doing is shutting down the two motels on the corner of La Cienega & Santa Monica and Holloway & Santa Monica. I regularly see people freebasing out side both. Addressing the local drug dealers working on the Grindr app would be a second solution. I have lived here 15 years, it’s not simply a homeless problem, its transients crazed out of their mind on bad drugs lately. We are going to see people murdered soon if WEHO does not do something about it.

I have lived on N Edinburgh Ave just in WeHo, just off SM Blvd, for 31 years and we have gone through periods of homeless people in our neighborhood in past years, but the problem has suddenly become much much worse than I have ever seen it — and the homeless seem to have become more dangerous than ever — like the axe man at the 7-11.