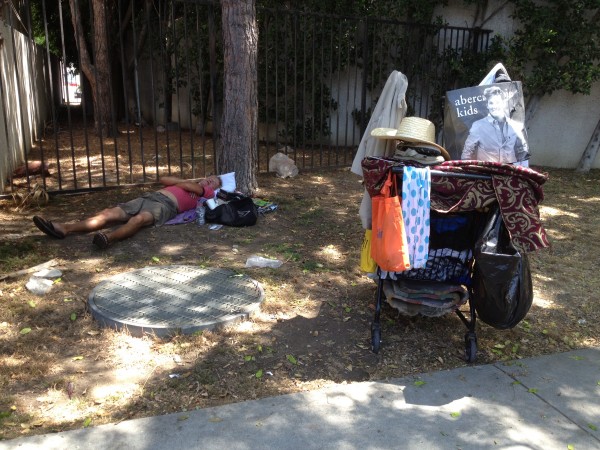 A homeless person with a cart full of belongings sleeping on WeHo’s Eastside (Photo courtesy of Roxanne McBryde).

Several West Hollywood City Council members last night called for a more aggressive to the city’s homeless, citing a perception by the community that there has been an increase in aggressive and offensive acts by homeless people.

“I know this sounds really harsh coming from a liberal former ACLU board member,” said Councilmember John Duran, “but I have to tell you it’s really gotten severe out there. They say a conservative is a liberal who has been mugged. Well I’m feeling like West Hollywood is about to tilt to be less compassionate if we don’t figure out ways to intervene.”

Councilmember John D’Amico said the West Hollywood Sheriff’s Station needs to be more aggressive in getting homeless people to stop sleeping on city sidewalks and in its parks and that the city should consider ways to remove shopping carts containing the belongings of homeless people from the sidewalks. D’Amico said that by allowing homeless people to sleep in public in WeHo is likely to attract more of them “the same way they learn that if they come to West Hollywood and they ask progressive liberals that are eating lunch at Kitchen 24, they will get money.”

Councilmember Duran also asked whether the Sheriff’s Station could remove belongings that homeless people leave on the sidewalks. Capt. Sergio Aloma said the situation is complicated because of a 2014 lawsuit brought against the Los Angeles Downtown Industrial District for removing unattended belongings of homeless people on L.A.’s Skid Row. Those belongings sometimes were taken while individuals left for short periods to go to a doctor’s appointment, get a meal or use a restroom. The Los Angeles City Council earlier this year approved a settlement that barred such seizures unless the property is obviously abandoned. Aloma said Sheriff’s deputies would have to pick up such property and put it in storage in the event the owner came to retrieve it.

Councilmember Lauren Meister also said the city seems “to be having a growing population of homeless who are aggressive. From the feedback that I’m getting from the public, we’ve had break-ins, we’ve had homeless defecating on private property and on the street, we’ve had physical injuries, attempted murder. We’ve had people passed out on sidewalks and walkways and door entry ways and we have substance abuse and trespassing.

“We’re putting a lot of our resources into a coordinates effort (to deal with the homeless problem),” Meister acknowledged. “But it seems like we have this growing population of homeless that are more aggressive, and its less about them wanting to use these services and more about us ensuring public safety.”

One incident cited in last night’s discussion was the Sept. 5 attack by an apparently homeless man on another man outside the 7-Eleven convenience store at 7950 Santa Monica Blvd. The alleged attacker, Kisu Brown, is in custody on a charge of attempted murder. Brown, 41, has a long history of arrests in Riverside and Los Angeles counties and, while apparently homeless at the time of the WeHo attack, once lived at 920 Orange Grove Ave. according to a WEHOville source. Brown also has been photographed recently driving a car in the Hollywood Hills.

City Councilmember Lindsey Horvath expressed concern about homeless people inhabiting empty buildings, some of which are planned for demolition. “We need to work with Building and Safety to address nuisance properties that we have identified as refuges for some of the activity that we’ve heard described here tonight,” Horvath said, referring to the city’s Building & Safety Division, which is responsible for enforcement of the city’s building codes. Horvath that that “in some extreme cases where we know the properties are going to be redeveloped” the city should consider allowing them to be demolished immediately.

One example of such a building, cited in an interview with WEHOville by a neighborhood resident who asked not to be named, is at 1207 Detroit St. That empty building and its adjacent lot are where developer Michael Soleimani is proposing to erect a four-story, 10-unit apartment building. The area resident said more than 20 homeless people were removed from the empty house in July after he and others complained to the Sheriff’s Station. Capt. Aloma acknowledged that such empty properties are a problem

Aloma said he has reached out to the L.A. County Sheriff’s Department’s Community Partnership bureau, which deals with homelessness issues on the east side of the county and in areas such as the San Gabriel Valley river bed, a major homeless encampment, to see how it is dealing with homeless issues. Aloma said in coming days the Community Partnership bureau, WeHo Sheriff’s deputies, the L.A. County Homeless Services Authority and members of the West Hollywood Homeless Initiative are planning to target certain “hot spots” in WeHo where the homeless are concentrated. He said they will offer medical and mental health services and access to shelter and housing vouchers. “I don’t think that one operation by itself is going to necessarily solve our problems,” Aloma said, “but it’s worth seeing what this will do.”

Mayor John Heilman conceded that West Hollywood has “a very big public safety problem surrounding some of the homeless.” But, Heilman said, “I want to make sure we don’t conflate all homeless individuals with crime…. There are some people in the homeless community who would never engage in these sort of aggressive attacks on others … Not everyone who is homeless is engaged in this kind of aggressive conduct towards other people…”

Heilman said that he has been in conversations with L.A. County Supervisor Sheila Kuehl, whose fifth district encompasses West Hollywood, about the issue of homelessness, which is something the entire county is struggling with. He said Kuehl is supporting outreach for mentally ill homeless people in Santa Monica who resist help and would consider supporting a similar effort in West Hollywood. He said Los Angeles County also plans to open its armories, which can be used to house homeless people, 24 hours a day.

Heilman said Kuehl is working on ideas for letting the county take action with homeless people who decline help but are an immediate danger to themselves or others or have committed a crime. Currently it is difficult to force such people into a shelter or treatment or arrest them,” he said.

“What is going to happen if they homeless are arrested?” Heilman asked. “Most likely they’ll be released if mentally ill or serve a short time and be back on the streets. We’re going to see this continued cycle of ‘in and out’ and ‘in and out,’ and that’s very expensive for the public.”

“I wholeheartedly agree,” said Capt. Aloma. “I don’t believe we can arrest our way out of this problem.”

Aloma said those arrested likely will be back on the streets soon. And doing that robs deputies of time they should spend investigating more serious crimes. “For every deputy sheriff you take off the street that has to spend time transporting, booking, writing reports, all the paperwork that goes with that, that deputy sheriff is off the street and not paying attention to car burglaries and other crimes,” he said.

What is the City of West Hollywood doing about homelessness?  Click here and here for the first two in a series of four articles outlining the steps the city is taking to address this complex countywide issue.

Beverly hills is more conservative then west Hollywood that’s why there is less homeless.

Make it illegal to be homeless.
These people are mentally ill and unstable & a threat to us all. These cycles are not helpful to ANYONE.

The Homeless isn’t just a problem in our city, it’s county-wide. I would hope that out elected officials find a way to address this issue realizing, that whatever we do, doesn’t amount to much if our neighbors in L.A., Beverly Hills, Santa Monica & Culver City, just to start with will not work together.

Get rid of the garbage and shopping cards and they will soon leave. Aren’t there Vagrancy laws and others that can be used for this…I’m surprised that the merchants on the street are not attacking city hall over this. Give then signs saying ..NOT GET THE STREET PEOPLE MONEY OR FOOD… it just keeps them here…..they are always asking me for a dollar and I’m tired of dodging those over loaded shopping carts they push on the sidewalks…PLEASE GET RID OF THEM!!!!.

People have to stop calling these people THE HOMELESS…they are PROFESSIONAL STREET PEOPLE that come from the freezing mid-west…I’ve live here for over 25 years and it’s so sad that the city has improved the city just to have these people take it over and destroy it…I’m tired of being accosted by them since I walk SM Blvd. every day and they are getting aggressive as they move into the residential areas. The enclosed bus stops are filthy from them eating and sleeping in them. Elderly people tand in the sun because the S People are sleeping in them.

So it finally takes a homeless person to take an ax to an innocent person’s skull and chop off their hand and a Hepatitis A outbreak to finally light some dynamite under the asses of the city council and city for them to finally react? The residents have been complaining about this for the past decade. #DayLateAndADollarShort

Happy to hear that this issue is finally becoming a priority for the city.

I was very encouraged by the excellent comments, questions and call for action offered up by Council Member John D’Amico and Mayor Pro Tem John Duran. I also appreciated Council Member Lauren Meister’s understanding of the issue.

John D’Amico referred to the broken window theory. That also applies to people’s lives. Let’s not continue to allow the unacceptable to become acceptable.

I’m waiting for a handicap individual(s) to file a lawsuit regarding blocked sidewalks! It has to be against the law to block at wheelchair bound person from accessing the sidewalk. If someone’s belongs are there for more than a day (and even that’s too long), it should be removed!!

“Sidewalks, like roadways, should be designed to serve all users. … Pedestrian facility design and operation must comply with the accessibility standards in the Architectural Barriers Act (ABA) of 1968, the Rehabilitation Act of1973 (Section 504), and the Americans with Disabilities Act (ADA) of 1990.”

Another thing we can do to deter homeless from coming into out City is to get the PAVILIONS RECYCLE CENTER CLOSED! This draws the homeless from all over and the Norma Triangle -in particular -is feeling the negative effects of its presence. When a homeless person commits a crime that should be mentally evaluated and if found mentally ill, they should be placed in a mental health facility (not jail) where they can get the treatment they need to get mentally well while being provided food and shelter. That would be tax money well spent and not throwing good money… Read more »

The City of Beverly Hills has less homeless in part to their pro-active business campaign. Most business have in their windows/doors a sign that reads (not quoting)..don’t give handouts to beggars, donate to organizations that actual help them. If you give money to them, they will most likely stay on the street longer. Everyone has compassion for the homeless but a little tough love goes much further in turning their life around.