Residents of some West Hollywood neighborhoods are going to be shouting “yippee ki-yay” if the City Council on Monday endorses a proposal to better manage the city’s coyote transients.

The Council will consider a proposal initiated by Councilmember Lindsey Horvath to develop a plan that will include “information on coyote behavior, management strategies, recommended responses to coyote encounters and attacks and other pertinent information,” according to an item on the Council agenda.

As WEHOville reported in August, residents living just west of Plummer Park have been seeing a group of three to four coyotes regularly since June. These coyotes seem to be most frequently sighted in the area north of Santa Monica Boulevard between Curson and Genesee avenues.

Those residents report being stalked by coyotes and hearing them howl. To date, no one has reported an attack by a coyote on a pet, which is one of the major neighborhood concerns. 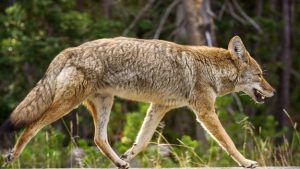 A memo prepared by City Hall states that “coyotes fill a unique niche in the ecology of Southern California. Hikers, outdoors enthusiasts, and those who live near mountains and foothills have likely encountered the small, thin dog-like creatures at least once. However, unlike bobcats, pumas, and other carnivores, coyotes are extremely well-suited to living in urban environments. Coyotes can scavenge and survive on almost any food source, including garbage, fallen fruit, small mammals and reptiles, and, sadly, domestic pets.

“Because of coyotes’ versatility, they have found an ecologic foothold throughout many parts of the Los Angeles area. In West Hollywood, coyotes have been known to wander down from the Hollywood Hills, setting up dens in parks, alleys, and other abandoned locations. They are drawn by easy access to both water and food. As coyotes acclimate to the presence of humans, they can become aggressive and dangerous. While attacks on humans are rare – with only one fatality on record in California’s history – attacks on pets do occur, although with an indeterminate frequency.

The memo notes that relocating trapped coyotes is illegal under California state law and that trapping and killing them “has faced serious opposition from animal rights activists and biologists alike.”

As an alternative, it recommends the city follow steps taken by other cities that have implement a multi-tiered coyote management plan similar to one recommended by the Humane Society, a copy of which can be found online.

“These plans focus on the many things residents can do to ward off coyotes, such as draining standing water and removing food sources, including small, unsupervised pets,” the city staff memo says. “The plan also illustrates proper techniques for coyote hazing, which is a means of maintaining a coyote’s fear of humans and reducing the potential for an aggressive encounter or attack. The plan lastly outlines how the city will react in the extremely rare case of an attack on humans, and in what circumstances, if any, the city will fund the lethal removal of a coyote.”

The memo notes “the City of West Hollywood’s longstanding commitment to the welfare of animals and human alike. The city has previously supported measures to end the declawing of pets as well as ban the sale of animal fur. Additionally, the city prioritizes the safety of its residents … Developing a coyote management plan would continue this legacy of safety and compassion for all.”

The Council will meet at 6:30 p.m. on Monday at the City Council Chambers, 625 N. San Vicente Blvd. Parking is free in the five-story structure behind the Council chambers with a ticket validated in the lobby.

Ah, they were here first! But I carry a few pebbles in my pocket to throw at them if I see them coming my way. I’ve also heard to put stones inside an empty soda can and tape up the top & use it as a “rattle” to get them to move on…..

One ran in front of my car on SMB near Fat Burger on Tuesday night around 8 pm. I was surprised it was out and about while things were still kind of busy. Usually I see them crossing Fountain much later when there’s few people or cars around.