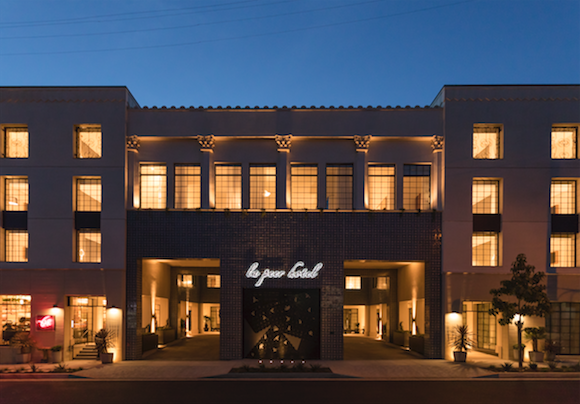 The La Peer Hotel has officially opened its doors in West Hollywood.

The 105-room hotel is at 627 North La Peer Drive, just north of Melrose Avenue. With its opening, the City of West Hollywood will be home to 20 hotels with others being planned or under construction.

The four-story hotel is part of the Kimpton chain. It has a pool and fitness center and more than 8,000 square feet of indoor and outdoor dining at Chef Casey Lane’s Viale dei Romani restaurant along with lounge spaces. It also has a 4,000-square-foot private rooftop event terrace. Room rates range from $372.40 a night for a “standard room” with one king size bed to $2,038.40 a night for a “La Peer Suite” with a king size bed.

“La Peer Hotel aims to bring a sense of ‘unbuttoned luxury’ to LA’s most walkable neighborhood in the Design District of West Hollywood,” said General Manager Nick Rimedio in an announcement of the opening. “The project has been an inspiring journey in preparing to realize a vision where we will offer our guests a chic yet totally engaging ‘home away from home’ defined by intuitive service and extraordinary dining by Casey Lane, among so many other amenities that will create experiences that are simply sublime. As the first hotel to ever open in the Design District, our goal is to become a beacon for the community where our neighbors are proud to call us one of their own and visitors get a unique view of life in West Hollywood.”

The hotel’s principal designer is Gulla Jónsdóttir, who has worked in architecture and design. It features an installation in the hotel’s backyard courtyard of work by graffiti artist Retna in combination with artist Guerin Swing.

The hotel is the first in the city’s Design District. Jason Illoulian’s Faring plans to construct another spanning the area between Robertson Boulevard and La Peer Drive as part of its Robertson Lane project. With the completion of the Edition by Marriott on Sunset Boulevard, which now is under construction, West Hollywood will have a total of 2,641 hotel rooms.

It will be interest to see what happens along La Peer on Monday night when the LASD has to deploy four to five units up the street to monitor the patrons existing the old Studio 51 until at least three in the morning and sometimes later.

With the upcoming total redevelopment on Robertson/La Peer of stores, theaters, hotels, this will benefit. It’s a sign of how our city is about to change even more then it has since we became a city. What’s happened SUNSET BLVD will move like a fog of money rubbing pandemic to Santa Monica. In years to come the bars will give way too. Our city identity as a recreational location for gays will become something else…. it’ll take a couple of more decades probably but the old saying “what wuz wuz” will be appropriate. I’m not sure it’s “progress” more than… Read more »