In November, I probed West Hollywood’s decade-old Climate Action Plan, interviewing Robyn Eason, the city’s Senior Sustainability Planner, and Bianca Siegl, the city’s Long Range and Mobility Planning Manager. I then followed up with an analysis of the city’s Green Building Program and Ordinance, identifying key areas that were no longer forward-thinking or cutting-edge for a city in California, home to some of the most green building regulations in the nation.

In both articles, I expressed concern that WeHo’s current Green Building Program is not getting West Hollywood any closer to Net-Zero emissions, operating entirely on renewable energy. The existing standards, once cutting-edge, are now parallel with the U.S. baseline for green building standards- outdated and far behind energy-efficiency leaders like San Francisco or nearby Santa Monica.

That’s why, on Jan. 16, I was excited to hear that the WeHo City Council has approved a contract with Global Green USA to update West Hollywood’s Green Building Program. My question now is: Will the updated program only play catch-up with cities like Santa Monica? Or, will it be considered visionary like it was at its inception in 2007?

I’ve researched the progress that other environmentally progressive cities in the U.S. have made and considered what aiming for “visionary” could mean for WeHo’s current and future residents, businesses and new development projects. Below I’ve listed five strategies that Global Green USA should include or expand upon in the new updates to WeHo’s Green Building Program. 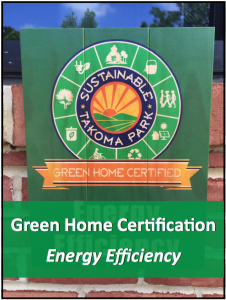 West Hollywood currently only requires all new construction to be “solar ready.” The problem with this approach is that it doesn’t necessarily lead to solar installations. Similar to Santa Monica’s policy, WeHo also should stipulate that new one-, two- and multi-family homes are required to install a solar electric photovoltaic (PV) system. City services can help residents and businesses analyze their solar potential, seek competitive bids and get a full cost analysis.

The best, most affordable and perhaps fastest way to get to net zero starts with insulating and weatherizing homes and buildings. Heating and cooling account for 50% to 70% of the energy used in the average American home, the U.S. Department of Energy reports. Insulation and weatherization reduce the amount of energy needed to heat and cool a structure so it’s easier to make up the difference using solar. One city that’s made a meaningful commitment to energy efficiency is Takoma Park, Md. This Washington, D.C., suburb inspires homeowners to get “green home certified” by offering rebates to cover the cost of energy audits. The city partners with local utilities that offer homeowners their own rebates to spur upgrades to more energy-efficient appliances. A neighborhood challenge offered cash incentives for efficiency-related neighborhood improvements, like planting trees.

It’s hard for a city to tackle statewide issues like traffic-related pollution, but West Hollywood should establish and strengthen a communication channel with the state and/or other neighboring cities to launch Green Commute Challenges, similar to those in Kansas City and Takoma Park. Kansas City sponsors an annual Green Commute Challenge, which challenges residents and gets companies to encourage employees to carpool or use public transportation one day a week, thereby reducing consumption and removing cars from the road during peak commute hours. Takoma Park just wrapped up a “Car Free Challenge,” a five-month-long competition to help the city reduce greenhouse gas emissions from transportation as well as cut the number of cars on the road. The city says the challenge reduced total car trips by 4,444, cut driving by 44,053.94 miles, and saved 33,045.62 tons of emissions.

Here in WeHo, the city should further expand the CityLine for inter-city commuting and make fleet vehicles hybrid-electric, as they are in San Francisco. The reduction of traffic, even if marginal, will improve air quality, reduce climate changing vehicle emissions and curb the need for new parking spaces.

Being already mostly built out, West Hollywood lacks adequate green space and greenery that can provide relief from the “heat islands” that build up around the city when the temperature soars. The simple solution is: plant more trees. The city is redeveloping West Hollywood Park and increasing the green space, but what about encouraging homeowners and businesses to plant trees on their property? Groups like Tree People and the Arbor Day Foundation could be potential partners in this effort.

Completely agree. Global Green USA should definitely spend some time analyzing and updating the GBP on charging stations, placement, and incentives for retrofitting existing buildings and/or legislating new buildings to include a certain number of charging stations.

I’ve always found it interesting driving by the West Hollywood library at night. The place is fully lit up – every light inside still shining. And all night long too. Green?

@Thomas, I can’t say that it’s the “Greener” choice because it’s not but i can share my thoughts as to why they probably leave it on. (1) Branding. The WeHo library was/is one of the staple structures of the city. Lit up at night, it’s an eye-catching attraction for future residential or commercial tenants of the city. (2) Safety. However, this wouldn’t explain why every single light is on..

interesting, but feels like a bit of a conflict of interest to have a guy who owns a lighting business that would benefit from expanding/enforcing weho’s green building program writing this.

@gigard, I appreciate the comment/concern. I’m a WeHo resident who happens to be an expert on lighting and energy efficiency. I’m sharing my knowledge. I also make it a point not to discuss lighting in my articles.

@SOS, updating the Green Building Program is the precursor to updating WeHo’s Green Building Ordinance, which holds the mandatory development requirements. Also, you can create legislation surrounding development but not for the green commute challenges.