West Hollywood now will permit short-term rentals such as those through Airbnb, but only in a house occupied by its owner who is on site while the guest is staying.

In making that decision last night, the West Hollywood City Council rescinded its total ban on short-term rentals that was put in place in 2015. However, it also rejected a proposal by City Hall that would have permitted such short-term rentals anywhere so long as the tenant or owner continued to live in the house or apartment unit and the tenant had the written permission of his landlord to rent out a room to a traveler.

The ban on short-term rentals such as Airbnb, VRBO, Homestay and Couchsurfing will affect the vast majority of the city’s households, given that 78% of West Hollywood residents are renters.

Councilmember John Duran and Councilmember John D’Amico opposed last night’s decision. Duran argued that such short-term rentals already are happening across the city. “So, from a pragmatic point of view, better to have a regulated version because it will be nearly impossible to enforce a flat ban.”

D’Amico agreed. “This is happening, and we’re getting none of the benefits,” he said, noting that money generated from taxes on such short-term rentals could go into the city’s Affordable Housing Trust Fund.

Mayor John Heilman initially proposed changing the ordinance under consideration to allow short-term rentals only in apartments that aren’t covered by the city’s rent stabilization act, which covers 93% of all rental housing units in West Hollywood. Heilman said he was concerned that, in permitting short-term rentals, landlords would have an incentive to evict long-term tenants and then rent their apartments out to travelers at much higher rates.

Councilmember Lindsey Horvath proposed banning short-term rentals of all apartments. Councilmember Lauren Meister said that allowing short term rentals meant “we’re taking away the opportunity for someone to live in West Hollywood … I really feel that this is going to be the downfall of the community.”

Heilman’s argument got support and applause from several of those in the City Council audience. Wendell Jones, who works with the Coalition of Economic Survival, a non-profit advocacy group for low and moderate income people, described Airbnb as one of the reasons for the homelessness crisis in Los Angeles County. Jones said he is helping tenants sue a landlord who evicted them and then began using their apartments for short-term rentals. 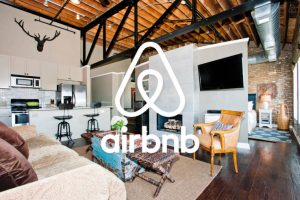 As in past meetings on this subject, other residents described how the ability to rent out a room to a traveler was what made it possible from them to pay their rent.

The City Council’s decision is likely to surprise some residents who have advocated for legalizing short term rentals. The Council in 2015 reiterated its strong ban on all short-term rentals. Then, under pressure from residents who said they needed the income such rentals provided, and from City Hall, which noted the difficulty of enforcing such an ordinance, it reconsidered that ban.

City Hall came back with a proposal like that presented last night, which would have permitted regulated short-term rents for no more than 90 days a year. That proposal was reviewed by the city’s Planning, Rent Stabilization and Business Licensing commissions.

After discussion by the City Council, City Hall staffers came back with the proposal on last night’s agenda

The bill approved by the City Council last night will come for a second reading and final approval at a future Council meeting. Meanwhile, Jeff Aubel, the city’s code compliance manager, said his staff would begin working on a plan for implementing the new rules. Aubel said that six months after they are in place, he will bring back to the Council information about how the program is working. That will allow the Council to review its efficiency and decide whether to renew it when the rules it approved last night expire in two years.

I found this article because I was wondering why all of a sudden I’m seeing a lot more one bedroom apts in weho on the rental market – and at lower rents than usual. Great! I can finally move to a neighborhood that I like and is closer to my work. It also makes me wonder how many units were airbnb’d by absentee tenants and not their owners – and if that’s what made the earlier ban so hard to enforce.

It’s about time they did this. My building has become a weekend party zone where local people rent out the apartment to have parties & prostitutes of all stripes shuffling in and out 24 hours a day. All of this is known to the landlord who intentionally turns a blind eye so he can “make the money.” What we need now is strong code enforcement and fines so high they make you pass out if you get one…

I live in a condo building and the city Council and Weho Compliance staff have been wonderful in helping us deal with a nightmarish short-term problem by owners who bought apartments specifically to use them as a hotel style Airbnb. When Weho Began sending them high fines, they sold to great live-in residents.

I know that this is not applicable to the current discussion about “hosted” short term rentals. But allowing ANY Short term rentals in apartment confuses And blurs the issue. And makes it more difficult for Weho To get rid of nightmarish visitors

This is great news. This is heavily abused in my apartment building in West Hollywood. I hope they finally put some effort into enforcing it. My landlord and manager are in cahoots with each other furnishing and short term renting a bunch of empty apartments in the building for really low rates. It’s disgusting.

The city should open a hotline for residents and tenants to report any illegal short-term rentals in an apartment. But what isn’t mentioned is whether or not there are any penalties spelled out in the ordinance. If not, there should be.

Penalties are very punitive. Something like 4X the cost of the advertised maximum stay.

NO TO AIR BNB
Reply to  Bill Skywatcher

AGREED! Time to nip it as it will only become more entrenched. Let’s catch a few egregious miscreants and hang them in the public square…not literally of course, but these folks need to be outed as a deterrent.

While everyone talks about “their rights” and rationalize the positive outcome for all parties “financially”, no one even bothered to discuss the impact airbnb has on the quality of life for older, long term tenants. Most airbnb guests are young, they wanna party in Weho, and they don’t care if they’re loud and disturb other people’s rights to quiet enjoyment. Yes, quiet enjoyment & habitability! How’d you like it when someone vomits in the elevator and no cleans it up for days? Or maybe guests decide to invite friends over for a party and go skinny dipping at 3 am,… Read more »

Jacob, legally, people who live in their homes can host. That’s it. I understand that enforcement is an issue, but with a complete ban, they aren’t enforcing that, so what matters here are the laws, enforced, or not. 78% of people in West Hollywood are renters. Of those 22% non-renters, legally, only a percentage can legally rent a room (or rooms) in their home, if it is owner-occupied. And of those in condo buildings, only those who have an HOA allowing it can rent. So I understand that older tenants are impacted. But not many, if at all. Especially those… Read more »

They do? What are you basing that number on? I live across the boarder, and have hosted dozens of people in my home. I’ve never had an unruly guest, not a single time. Maybe that is because I’m here, and I’m present, as their host.

Your question about enforcement is a valid one. But it doesn’t mean much, when they aren’t doing much to enforce the ban they have up already.

Do you live on Rugby? Sounds oddly like the house on our street that rents the whole house (without owners present) and have rowdy parties every week. The owner of the property does not care about how this affects the neighbors because they do not live there and simply just airbnb their property. Everyone on our block has voiced their concerns and contacted the city to no avail…

If you live in Rugby, D’Amico is also experiencing this issue.
“Everyone has voiced their concerns to no avail” is horse manure; D’Amico would have gotten it shut down the first day.

Worst headline guys. You had me all excited that WeHo had banned airbnb from hollowing out its neighborhoods. The headline should read that nothing happened last night. The hollowing out of WeHo will continue.

NO TO AIR BNB
Reply to  Jill Stewart

Our communities were built and have prospered based on a set of laws that have by and large prevented litigation over every breath we take. Along comes disruptor airbnb with virtually no skin in the game who believes that they can prevail in partnership with whoever is willing to bend the rules. On this point Council Member Meister is wrong. Living beyond one’s means and finding some mechanism to allow living in Weho defies logic and reason. It will hardly be the downfall of the community, however moving targets may continue to inspire more disruption. Not a good idea at… Read more »

I was wrong about Council Member Meister’s statement , after reviewing the testimony. We don’t need a commercial hotel business in residential units exponentially disrupting our communities.

Jill, the city already has a ban on short-term rentals. All they are (now) allowing for is “hosted” rentals, which means you must live in your home, and you must have the permission of your HOA if you live in a condo building. In a city with 78% renters, the percentage of owner-occupied units is small, and even smaller when you consider how many of those might live in a building where the HOA doesn’t agree to short-term rentals. This is not going to have a significant impact on decreasing housing stock, and I believe that property owners should be… Read more »

I have to agree with their vote on this. I think the problem with allowing apartment-dwellers access to this is that landlords might try to make a deal with them on the side, allowing them to rent a room in an apartment, taking a cut of the profits. This could dip into the housing stock (even as a room for rent). I don’t know how many people would try this, but I could see it happening. I think that if you live in your home, you should be able to rent room(s) out, as you please. Unless you are in… Read more »