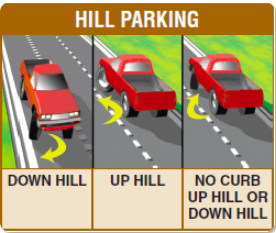 What West Hollywood resident hasn’t gotten one of those $23 tickets for failing to turn the wheels of his or her car when parking on a sloped street?

Now the risk will be a bit lower with a decision by the City Council to require such positioning of a car’s front wheels only on streets with a grade of 7.5% or more. Previously, wheels had to be turned on streets with grades of 6% or more.

Streets that no longer will require such wheel turns after March 5 are as follows (but note, the law will be enforced until then):

CORRECTION: An earlier version of this story, relying on an attachment to the City Council agenda, said that cars parking on all of the streets listed below  no longer would be required to turn their wheels.  In fact, the change applies only to portions of those streets, which will be indicated by signs on the streets.  The story has been corrected to reflect that.

Finally! This is long overdue.

The article doesn’t make clear that it’s only *portions* of the streets listed that will have the rules relaxed. At the Transportation Commission discussion of the proposed change, it was made clear that all of the streets listed have stretches that are at grades of 7.5% or more (probably includes the northern-most block of San Vicente Blvd.), so don’t expect all the signs to disappear on any of those streets. The tickets are based on not turning the wheels as instructed by signage, and that will continue to be the case.

You are correct. The attachment on the City Council agenda did not explain that, leaving one to assume that the changes affected the entire streets mentioned on the attachment. I have reached out to City Hall and discovered that and will correct the story. Thanks for the alert!

San Vicente ramping up to Sunset is NOT a 7.5% or more grade? Really?

State law says “3% grade”, so WeHo has already been giving folks a break.

SHEESH, can I get some refunds for all the baseless tickets I’ve received over the years! ;D