Once upon a time, in a glittery land, not so long ago, there was a tribe of people who named themselves the LGBT community, and they were all relatively happy.

As acronyms go it was a very effective one, receiving widespread acceptance, easy to remember and succinctly covering the spectrum of sexual orientations (Lesbian, Gay, Bisexual, Transgender) 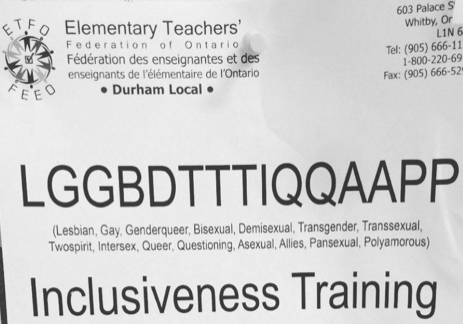 As helpful people started to weigh in on the term, it started to take heat for not being inclusive enough. An increasing number of people said that they were having trouble defining themselves on the rainbow of sexualities represented by the LGBT acronym. So, the “Elder Council” held a board meeting and came up with the idea to simply add more letters to the LGBT term in order to keep everyone smiling.

Strangely enough trying to include everyone wasn’t solved by this, and what was intended as a great solution became the cause of many more problems. The brain children that decided to add extra letters to the acronym never anticipated how many more letters would be needed. Before they knew it, the LGBT term became LGBTQQIP2SAA and is continuing to grow.

The letters now stand for:

L: Lesbian. Women who are romantically or sexually attracted to women.

G: Gay: Men who are romantically or sexually attracted to men.

B: Bisexual: A person is romantically or sexually attracted to either sex.

T: Transgender: People who have a gender identity or gender expression that differs from their assigned sex.

Q: Queer. Used to be a derogatory term now taken back and an umbrella term for sexual and gender minorities who are not heterosexual and/or not cisgender. Gay men also use it, which can be confusing.

I: Inter-Sex. A general term used for a variety of conditions in which a person is born with reproductive or sexual anatomy that doesn’t seem to fit the typical definitions of female or male.

2S: Two Spirit. The term references a tradition common to several Native American tribes, where some individuals possessed and manifested a balance of both feminine and masculine energies, making them inherently sacred people.

A: Allies. Which of course is not a sexual orientation. Allies have played an important role in gaining our rights, but this in no way needs to be identified in the acronym.

As the letters were being adde, the meaningless debates began about what the LGBT community should call itself and how to include everyone. Why these have these debates been meaningless? Because we will never be able to come to a universal consensus on what to call ourselves.

Labels themselves are problematic by nature. It’s completely understandable that people feel the need for appropriate descriptive terms that they can identify themselves with. The result however, is often extremely politically correct and incredibly awkward terms that are hard to understand. When people with different disabilities were labeled with terms ranging from “handicapped” to “disabled” (and the most awkward sounding “differently abled”), the result was that no one knew what the proper term is for people with disabilities. It’s the same kind of political correctness and unyielding inclusiveness that is causing the never-ending discussions over what acronym members of the gay community should use to describe themselves.

Unfortunately, the glaring truth is that there will never be an acronym that is inclusive enough, broad enough, politically correct enough to cover every single sexual orientation, sexual identity and sexual minority in our community. If we acquiesce to every single call to include just /.;lkn for inclusiveness sake, the LGBT label will eventually be a meaningless group of endless letters that no one remembers the meanings of.

As a community we should stick with the LGBT+ term that has already in society’s consciousness and has helped us gain widespread acceptance for the most part. We, as a community that detests and has fought so hard against labels, have become society’s biggest hypocrites in claiming such a strong need to labels ourselves. We should not take the LGBT term literally, but instead the LGBT acronym should be an umbrella word that covers all sexual and gender minorities that deviate from the heterosexual norm.

If we as a community are confused by all this, our straight counterparts can not be expected to understand. Especially when some have a hard enough time already dealing with anything other than heterosexuality. Let’s end the confusion and get back to fighting for our rights as a community.

At the end of the day, we are all just trying to make this world a better place for the straight community and the gay community, and that is what we should all be focusing on. The time we spend on labeling ourselves would be better spent on furthering our cause for us and future generations.

you are absolutely right. Je pense la même chose (je vis à Montreal). It’s becoming kind of ridiculous and, because I am gay, I can say it.

Interesting read.
I am not LGBT, but always found the acronym to be a good one
The adding of more letters made it kind of tedious, and over-flowing with self-importance.
I mean two-spirits? Isn’t it just venturing into the supernatural with that one?