West Hollywood is considering testing public video cameras in four locations to judge their use as public safety devices.

The proposed locations are on Santa Monica Boulevard at La Brea Avenue, at North Robertson Boulevard, at North San Vicente Boulevard and at La Cienega Boulevard. 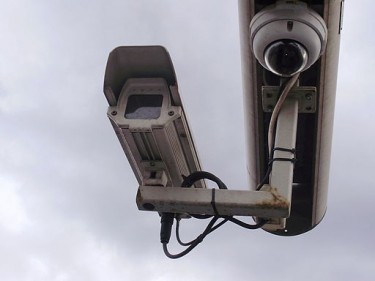 The proposal to test the cameras comes a little more than two years after the City Council first authorized it in December 2015. It will go before the Council for its approval at its meeting on Monday, a little more than two weeks after the stabbing death of a homeless man on La Brea Avenue near Santa Monica. Sheriff’s deputies are continuing their search for the man who committed the murder, which has prompted a demand from residents of the city’s Eastside for an increased police presence.

The city’s Innovation Division has researched similar programs in other cities including Boston, Washington, D.C., Los Angeles, Beverly Hills and Detroit. It also has developed privacy guidelines to ensure that the installations do not unduly compromise the privacy of local residents and visitors.

The City Council will be asked on Monday to approve a request for proposals from vendors, four of whom will be selected to do a nine-month test of a particular security camera operation. Each prospective vendor will receive a $10,000 stipend.

A memo to the City Council from the city’s Economic Development and Public Safety departments says the vendors will be encouraged to test cameras or other sensors that “can also provide insights about how people interact in the city. For example, innovative companies are using smart city cameras and sensors to measure volume and direction of pedestrian, bicycle, and vehicle traffic. Such programs can inform city planning and other municipal operations as collected data can be used to increase pedestrian and vehicle safety or increase economic activity.” The city also will evaluate the cameras and their sensors in regard to privacy and it will determine when and how to make video available to law enforcement officers.

The memo to the Council cites some innovative approaches used in other cities. For example, Boston has struck agreements with local businesses in its growing Seaport neighborhood in which they agree to share their video surveillance data with the Boston Police Department to help make large public events safer.

In Washington, D.C., Capital Shield is a public-private partnership through which participants provide the local police with direct access to their security cameras. “This enables first responders to quickly gain the situational awareness required to assist citizens during emergency situations,” the memo states.

The City Council will consider authorizing the release of the request for proposals at its meeting on Monday at 6:30 p.m. at the City Council Chambers at 625 N. San Vicente Blvd.

Only 1 on the East Side? You must be kidding. How about 1 at Fairfax and 1 at Fuller or Martel?

We need City Council members who live on the East Side that will make sure we don’t get overlooked all the time.

I thought I read that the guy was caught, this article says they are still searching for him

The article noting his arrest was published after the article about the security camera test, when the arrest had not been made public.

What happened to the feature on WEHOville where I could share articles on FB pages? I like to do that on my Apartment buildings’ FB resident Page at the Avalon

Good point! I’ll ask my tech guy to add that

This is the BEST news I have heard in years. It’s long overdue. I would suggest skipping the “testing” period and just do it NOW!

Also make sure that there are signs which notify people they are being recorded which would dissuade criminal conduct.

Under California Law: “… there is no assumption by anyone of privacy while in public spaces…”

Safety of our Community is much more important than privacy issues. If City Council rejects this idea, they all need to be replaced.

Almost three years after my friend’s head was beat into the sidewalk, right across from the Sheriff’s station (he still hasn’t recovered), and two years after being approved by the Council, the City of West Hollywood Government finally gets around to testing public video cameras? The glacial movement of their bureaucracy is absolutely infuriating. This isn’t as big a project as changing the sidewalks, which required more studies, more money, and also included changes to traffic intersections, installation of medians, turn lanes, etc.. And those were implemented faster than this.