Scooting soon may be the preferred mode of transportation for young West Hollywood residents and those who just want to feel that way.

Evidence of that is the number of electric scooters from companies such Bird and LimeBike that have been appearing on the sidewalks of West Hollywood of late.

Bird is a Santa Monica-based start-up. It was launched in September 2017 by Travis VanderZanden, a former executive of Uber and Lyft, and already has a market valuation of $300 million. LimeBike was founded in January 2017 by Toby Sun to operate dockless bicycle-sharing systems that riders can access with a mobile app. In February of this year it launched its Lime-S electric scooters. Neither, however, has secured permission from the City of West Hollywood to operate their electric scooters on city streets. LimeBike’s dockless bicycles also are not legal in West Hollywood, which operates its own bike share plan. 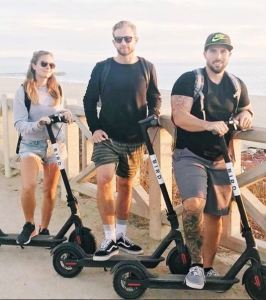 Riders can find an available scooter by downloading the Bird or Lime-S app and using it to reserve a scooter or unlock it if it’s nearby. Three kick starts and you’re off. Depending on how heavy you are, you can ride as fast as 15 mph. With Bird, each ride costs $1 plus 15 cents per minute. Lime-S charges an initial fee of $1 and 10 cents a minute.

At the end of a ride, you can leave the scooter at your destination and use the app to lock it. Accounts are prepaid using a credit card. Every night after 8 p.m., Bird workers travel around to pick up the scooters and get them recharged.

Bird tells its riders they must be 18 or older and should use bike paths and not ride or park on sidewalks. Instead they are asked to park near bike racks. They also are advised to wear helmets. Lime-S suggests that some cities may require helmets and doesn’t specify on its website whether a driver’s license is required, saying that is up to state law.

Think Uber, but on fewer wheels and without having to deal with a driver.

“Preventing car ownership is the goal of all these companies,” Bird’s Travis VanderZanden said in recent interview with Techcrunch, noting competitors such as LimeBike. “I think if all of us are successful, that’s fine.”

Some of the cities in which the scooters are operating currently don’t seem to agree. Daniel Mick, West Hollywood’s code compliance supervisor, said the scooter companies don’t have the required city approvals.

“We are reaching out to the company,” Mick said. “We’ve told them they can’t leave them on the sidewalks and must remove them. We’re trying to work with them to do it the West Hollywood way.”

Santa Monica has taken a tougher approach. In December that city filed a lawsuit against Bird, claiming that it was operating its scooters without city permission and that it ignored citations asking Bird to obtain licenses and remove the scooters from sidewalks. Bird settled that suit in February, agreeing to obtain the required business licenses and to pay a fine of $300,000, relatively little for a start-up that has been valued already at $300 million. Bird also agreed to produce a public safety campaign that would appear on local busses.

On Santa Monica Boulevard on West Hollywood’s Westside the Lime-S and Bird scooters generally aren’t parked near the city’s SmartBikes stations but are at scattered locations outside shops and bars. Recently there was a neat collection of four of them on the sidewalk in front of Shake Shack. That might indicate that Lime-S is following a practice by Bird in Santa Monica, where it suddenly parked more than 1,000 of them on city streets to raise awareness of the program.

While many residents have praised the appearance of the scooters, others have told WEHOville that they are concerned they will compete with the city’s financially challenged bike share program and worry about collisions between pedestrians and those riding electric scooters on sidewalks. Sidewalk riding is inevitable given the shortage of bike share lanes in West Hollywood.

Click here to subscribe and receive an email every morning showing the previous day’s news on WEHOville. You’ll be joining the great list of supporters of WEHOville and our effort to provide you with the news you want and need.

Are they gone? I saw none of them around today.

I think they are a good idea but need to address the sidewalk issue.

Yes, I have a very large problem with these scooters! WE NEED MORE! The past 3 times I tried to get one, someone else would get to it before me. LOL I think this great and innovating for our community. I remember when the city rolled out the bike program and all the naysayers were up in arms, just like most anything new that happens in Weho. So I say to that group, move to Palm Springs! Steve Martins village utopia concept is passed. Sorry, Steve no disrespect, it’s just how it is, Weho is progressing. To Larry Block, if… Read more »

This afternoon I saw several people enjoying the new scooters. I also saw several filthy, sketched out homeless people.
Guess which one I’m worried about.

WOW! Talk about over reacting. For a city with a median age of 39 and a majority male population, there are a lot of old ladies here.
Many of you witnessed people using these… That tells me they’re somewhat popular and well received!

Let’s calmly work out the kinks and give things a chance.

The people I witnessed riding the outlaw scooters, including the two guys on one, where doing everything wrong. So that tells me that legal and safe scooter riding is unattainable and unenforceable.

Santa Monica is regretting getting in cahoots with a scooter company. But Weho won’t buy into the fake “mobility” spiel……Urban scooter riding is just a cheesy trend.

Soon it will go back to being exclusively enjoyable to 12 year olds in West Covina.

Santa Monica is not regretting. Do you ever men’s WeHo???? Listen to their City Council meetings. They talk about it all the time as part of their mobility plan. They just wanted to get the money from them.

Look, I’m literally the poster child for futurist mobility, but I can’t see this ending well. I could join the endless chorus of commenters complaining about the safety of these scooters and the impact of unused (or ‘parked’) devices littering our sidewalk, but I think everyone’s covered this pretty well. I think the real issues with these devices will become manifest on Sunday Funday when about 100k people are given access to them while boozing it up in boys town. I expect to see these things discarded carelessly on our sidewalks and streets damaging cars and blocking traffic. I can… Read more »

Your futurist predictions are spot on!

I think you misunderstood me. I’ve commented on other threads in this post and generally argue in favor of allowing these devices on our sidewalks. The more people we can get out of their cars and on our sidewalks, the better. i just don’t think the deployment was handled properly. There was no communication, no education, nothing. The devices just magically appeared. The first time I encountered one of these was when I saw one partially blocking the sidewalk in front of me. I’m disabled & on wheels myself so I don’t really have the same freedom to navigate around… Read more »

At most every city council meeting we hear about all the meetings some attend, in detail. From Metro to bike mobility and shared economy these companies must have some contact with some of our city council- I’m just curious which city council person encouraged or turned a blind eye to the placement of these scooters.

They’re not attending the right meetings.

“Confiscate & Eliminate” A new shrill clarion call of indignation to unite the self-righteous self-appointed policemen of the world (WeHo anyway)… Extraordinary that people who bet their lives everyday that a few painted lines on tarmac as sufficient to protect them from total strangers operating machines weighing several tons, capable of speeds in excess of 150 mph find it inconceivable that a lightweight scooter with top speed of less than 15 mph might be operated with similar due concern. So extraordinary that one can only wonder where the all this proposed confiscation and elimination of theirs might stop given a… Read more »

I would say self-righteous, self important, self serving, self centered, public property stealing and law-breaking scooter people.

Sorry to break this to you “Dorlang”, but I’m afraid your not exempt from laws and ordinances…….You’re not special. 🙁

Fine. Make them pay fees. And then move to Palm Springs.

Today I was “trying” to walk along SM Blvd and I was nearly run over 3 different times by people on these scooters. Like others have said, between the bikers, illegally riding their bikes on the sidewalks and the skateboarders and now these scooters, it is not safe for people to actually walk on the sideWALKS.

PEDESTRIANS ONLY ON SIDEWALKS!
Reply to  No Scooters!!!

Today while up as Sunset Plaza, skateboarders were riding the railings in front of several businesses on the south side while pedestrians, possibly tourists were absentmindedly strolling the sidewalk. Couldn’t believe it but it happened. Chaotic!

Scooters Forever
Reply to  PEDESTRIANS ONLY ON SIDEWALKS!

I guess they should all move to Palm Springs, right, Scooters Forever? Your comments are not helping your cause.

You guys who are against these need to get out of the bubble and go to Santa Monica where they’re really working. Stop being old ninny’s. WeHo is being left in the dust. Old queens move to Palm Springs if you’re afraid of the modern world.

Go ahead take your little scooter toy and play in Santa Monica. (They don’t like them there either)

……and take your fake service dog with ya.

The city of West Hollywood needs to put some regulations and ENSURE ENFORCEMENT of these scooters. I nearly got run down by someone riding one of these on the sidewalk on Santa Monica Boulevard on Friday morning!

They need to make them do an education campaign. No one realizes you can’t ride in sidewalk.

Look, I understand your complaints and such but they do so much good for my community. I’ve stopped driving my car to work and instead am riding a bird. And you have to understand that the city should be providing us with safe and reliable lanes for these. The reason people ride on sidewalks are because they don’t feel safe in a lane of traffic. People are coming at 40mph and the scooter is going max of 15mph, how would you feel?

Manny
Reply to  Who dis

Here’s how I feel……I walk at 3 mph, when an outlaw scooter comes at me doing 15 mph, I feel very unsafe.

Try walking to work, it’s better for you, the environment and your community.

Who dis
Reply to  Manny

Ok but if you were on a scooter and and the street next to traffic with no more protection that paint on the ground.

Manny
Reply to  Who dis

I agree they’re not safe to ride.

But transferring someone’s problem to someone else is inconsiderate, unfair and selfish.

Aside from the fact that the scooters were not given permission to operate in Weho.

“the scooters were not given permission to operate in Weho.” So what?

Given the pace at which City Hall moves, we shouldn’t be waiting for their approval to try new mobility solutions.

Steve
Reply to  Who dis

If you don’t feel safe on a major boulevard, then take a side street with a scooter. On the east side of West Hollywood, try Romaine or Willougby.

Regardless, use the street. Otherwise, you’re breaking the law.