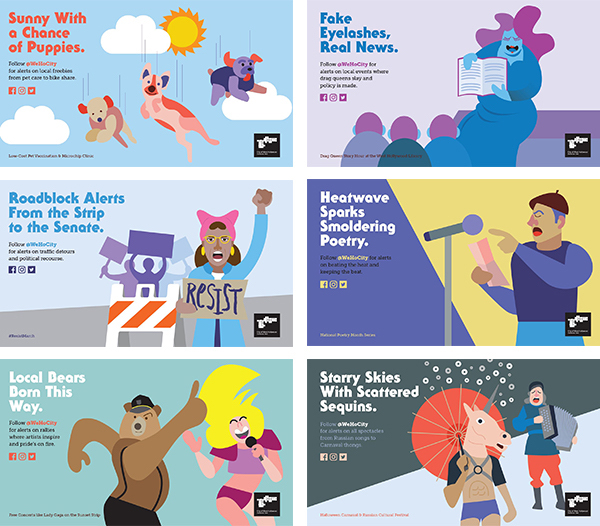 The California Association of Public Information Officials (CAPIO) has given the City of West Hollywood its top award in the Marketing Plans/Campaigns category for the City’s colorfully illustrated traditional advertising and outreach campaign – Social Media Connect @WeHoCity – which encourages community members to follow the City of West Hollywood’s primary social media channels.

The 2018 CAPIO “EPIC Award” for Excellence in Public Information & Communications was presented at the CAPIO statewide conference in Santa Rosa on April 11, at a ceremony and dinner. Staff members from the city’s Communications Department accepted the award on behalf of the city.

“Congratulations to the City of West Hollywood’s Communications team for this exceptional statewide recognition,” said West Hollywood Mayor John Heilman. “Our city prides itself on creativity and on constantly raising the bar. This CAPIO award is affirmation that we’re leading the way among small cities in how we engage with the community.”

During the past three years, the City of West Hollywood has been implementing its communications and community engagement strategic plan. As part of that effort, the city’s Communications Department has invested in digital outreach strategies that help grow the city’s reach on social media to engage active and interested followers who seek news and information about city events, programs and services.

The Social Media Connect @WeHoCity campaign is built around six unique creative designs, which were deployed in a variety of print and web publications and direct channels, such as postcard mailings to community members. For outdoor media, the city used approximately 30 bus shelter and bike kiosk locations within West Hollywood’s 1.9 square-mile footprint. The city also produced customized Social Media Connect @WeHoCity bike baskets for its entire fleet of “WeHo Pedals” bike share bicycles, which feature each of the six designs. With the enormous community buzz created by the traditional campaign, the city added digital assets, such as short social media animations, to the marketing mix.

To develop the Social Media Connect @WeHoCity campaign, the city worked with Kilter, a graphic design and branding firm, to provide West Hollywood-specific illustrations that speak to the city’s vibrant and unique character. Designs feature sharp copywriting and lush colorful illustrations to grab the attention of community members and encourage people to follow the City of West Hollywood at its official social media handle, @WeHoCity on Facebook, Twitter, and Instagram.

–Roadblock Alerts From the Strip to the Senate – connects the dots that the city’s social media is a place to not only learn about traffic advisories but policy actions as well;

–Local Bears Born This Way – captures the excitement of a Lady Gaga pop-up concert on the Sunset Strip; and

During a seven-month period in 2017, following the launch of the campaign, there was between an 11% to a 15% rise in followers (depending on platform) in the city’s @WeHoCity accounts on Facebook, Twitter, and Instagram.

West Hollywood wins another award for its creative energy. Congrats to staff for your hard work.