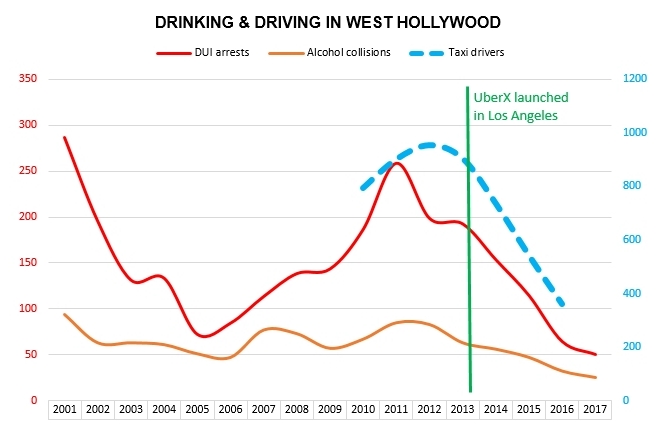 Uber and Lyft could be responsible for the recent decline in drinking and driving in West Hollywood, but a new report finds surprisingly mixed evidence. The report comes from WeHo by the Numbers, based on local data and broader academic research.

Collision and arrest numbers show that there is less drinking and driving today than at any other point in West Hollywood’s time as a city. The connection to Uber and Lyft seems obvious, given the prevalence of Uber and Lyft in the city’s nightlife areas and what users say about their choices.

Researchers from the University of California, Davis surveyed users in Los Angeles and six other major cities. The users were asked why they picked the service over their own cars. The number one reason was to avoid drinking and driving. One-third put that answer first, before parking or any other reason.

However, correlation is not the same as causation. Many other factors — such as enforcement efforts — could be partly or totally responsible for the recent drop in drinking and driving. The report highlights two facts that argue against Uber and Lyft as the (sole) cause. The first is that the drop started the year before Uber’s mass-market service arrived.

The second fact is that a similar decline in drinking and driving happened 10 years earlier, long before Uber existed. An accompanying chart shows the earlier decline superimposed on top of the recent drop. They look a lot alike. It makes one wonder whether the same cause could be responsible for both declines. 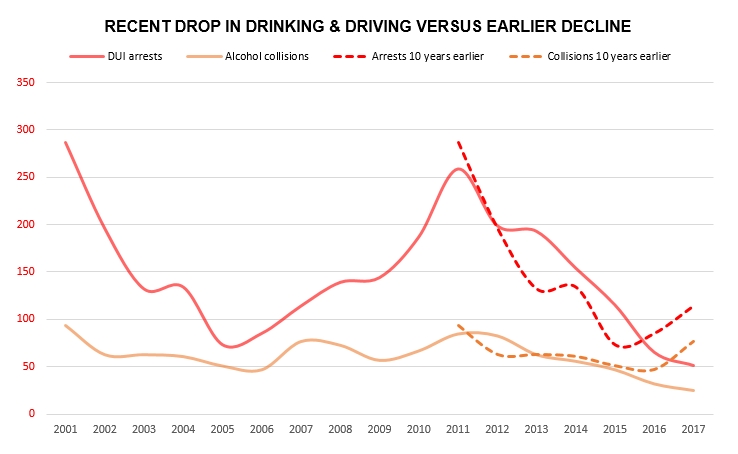 The report also reviews academic studies that tested the statistical relationship between Uber and drinking and driving. Several of them concluded that the Uber effect is real. Their estimates of the size of the effect ranged from 4% to 62%.

For example, researchers at Temple University in Philadelphia examined Uber’s impact on alcohol-related traffic fatalities in California cities. They found that the number of fatalities was 4% to 6% lower with Uber service.

Nevertheless, the report argues that the academic evidence is too mixed to be conclusive. For example, a study by researchers at USC and Oxford found no Uber effect at all. Another study found the effect in some cities, but not others. The Temple study found an Uber effect, but not on weekends or in small California cities like West Hollywood.

For more information, see the full report, Are Uber and Lyft responsible for the decline in drinking & driving in West Hollywood?

The initial drop in DUI’s in both the instances on the graph can probably be attributed to improving economies and employment (after the first internet collapse in early 2000’s) and the rebound in the economy after the more recent collapse ending about 2011. People probably drink more anyway when they are unemployed and can’t drink every night if they have to go to work. The remainder of the decline is most likely Lyft and Uber and the manner in which those services are easily accessed. I would expect the trend to flatten out as more seasoned Lyft and Uber drivers… Read more »

I use Lyft and Uber to come home from nightlife. I never have a difficult time finding a car. I haven’t even seen a trend in it taking longer, or less cars available to pick me up at that hour.

If you see the number of people leaving bars/clubs and getting in Ubers/Lyfts, it’s great to see they’re not driving when they likely would have before.
And I believe I’ve read The Abbey is the #1 spot of Uber/Lyft activity.
As an eye witness and customer, ride share services logically have to be making a positive difference.

Thank you. And just based on my own experience, with people I know, who would sometimes drive (when they absolutely shouldn’t have), I can’t see how it hasn’t made a difference.