Visit West Hollywood, the city’s travel and tourism agency, has taken on a new name and unveiled a new logo. Going forward, Visit WeHo will be known as the West Hollywood Travel + Tourism Board.

In an announcement of the change, Tom Kiely, the organization’s president and CEO, said “As our organization worked to promote the destination in key international markets, it became clear that the local nickname of ‘WeHo’ represented in our former logo was misunderstood and unrecognizable to those outside of our area.” 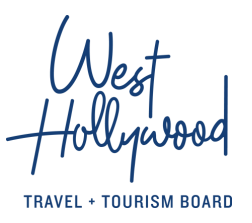 The announcement said “the new logo includes the city’s full name, West Hollywood, which better supports the organization’s mission of positioning West Hollywood, California as a first-choice destination for visitors traveling to the Los Angeles area.”

West Hollywood Travel + Tourism Board worked with Destination Analysts on study of the awareness and perception of “WeHo” and “West Hollywood” in key national and international markets.

“The logo gives a nod to West Hollywood’s close ties with the globally known Hollywood industry and the creatives that call our city home,” said Jeff Morris, chief marketing officer of WHTTB. “Visitors can have a true ‘Hollywood’
experience in West Hollywood with our world-class hotels, dining, entertainment, shopping and more, and we wanted our logo to reflect that.”

The new logo and name change comes alongside a new visitors guide, which can be viewed online, and will be followed by a global advertising campaign in select markets.

The logo looks amateurish. It is neither hip nor classy. Thank you West Hollywood Chamber and Tourism Board. If you all had ventured beyond the four corers of town into the real world, this would be obvious.

Well at least they got this right

I get the motivation or the iteration of changing the name but I agree that West Hollywood be distinguished but that WEST HOLLYWOOD be spelled with WEHO part bolded or in blocks so both names could be interchangeable in one that is associated with the other. Weho is the shortened version of West Hollywood. But yes travel and tourism is better than visit Weho but Visit Palm Springs is also it’s logo. However it is marketed in areas of wealth but West Hollywood proper and Beverly Hills are synonymous with wealth! I am upset that West Hollywood Tourism emphasized on… Read more »

If “WeHo” was the problem, couldn’t it have just remained “Visit West Hollywood”, like many of us knew it as anyway? “West Hollywood Travel & Tourism Board” sounds a little stale.

In the end, it probably doesn’t matter so much, as long as the folks at the WeHo Travel & Tourism Board (I’m speaking to the locals) continue the outstanding work they’ve been doing in promoting our City to the world. 😉

What’s amazing is they even used WeHo in the first place. It doesn’t take a rocket scientist to figure out this is mostly a local moniker. The City nixed the same abbreviation across the top of the soon to be built Recreation Center during the design stage.

Clear and to the point – good move

REALLY! This looks like an attempt to get in line with beverly hills or some other kind of capitulation! I noticed that they took down their “Visit WeHo” video, the one that “Visit California” refused to show, so I’m hardly over stating the case when I say capitulation. The old “Visit WeHo” logo looked more progressive and in line with the spirit of West Hollywood. Real progress would be if the “Visit West Hollywood” people come out with a video like Everyone Is Welcome as the Discover Los Angeles people did with their #EveryoneIsWelcome right in the middle of Trump’s… Read more »

As a former VWH Boardmember, I wholeheartedly applaud Tom and the Board for making this change. While we all like to say WeHo around these parts, I don’t think it is the best way to promote our brand outside our own boarders. This is a huge marketing win!

Agreed! There is something cheap sounding about the term WeHo. The more we can work it out of the vernacular, the better.