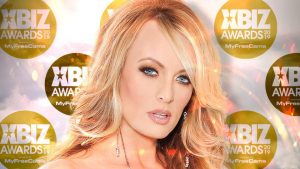 In an announcement of the proclamation and award, the city said it is “recognizing her leadership in the #Resist movement. In these politically tumultuous times, Daniels has proven herself to be a profile in courage by speaking truth to power even under threats to her safety and extreme intimidation.

The Washington Post reported that her platform “promoted sexual health education, opposition to the Obama administration’s stimulus package, abolishing the federal income tax, and an end to the Iraq War. Vitter was also a major topic …

A sad day for WeHo. A new low. The Anti Trump march was bad enough but this is just embarrassing. And enough with the “victimization” of these people. Their choice, no gun to their head. AND she broke a signed legal agreement to keep quiet. Interesting the left has no problem with that.

I get that this “honor” of Ms. Daniels is supposed to be ironic and humorous but it looks like the joke is on West Hollywood. I understand most of us have no use for Donald Trump and his policies but what does that have to do with honoring Ms. Daniels? While we don’t want to vilify her for her profession but she is in a business that objectives women and perpetuates false body images. Her conduct in entering into a confidentiality agreement and then trying to break is not exactly something that deserves to be honored even if we don’t… Read more »

Then you should have more of a concept of what West Hollywood past AND present is comprised of, as I pointed out for you above. The Sunset Strip was a sexual revolution counter culture hub in this nation all the way back in the 1960’s, apparently that doesn’t ring any bells amidst all the holier than thou slut shaming. Where do you think West Hollywood is, in Kansas somewhere? Whatever or WHOEVER it takes to evict our current excuse for a president deserves a key to every city in the nation.

Which misguided (clearly male) idiot thought this sexist circus was a good idea? I guess the City thought they were being progressive and irreverent by attempting to give the Trump administration the finger. Thanks for making the entire city cringe.

How low can we go, West Hollywood. This is disgusting.

Whose poor decision was this?

When political expediency compromises good judgement and integrity the game is soon over and it takes down those standing by benignly nodding their approval.

Will Councilmember Meister & Horvath be attending after being part of the Duran annointment?

Hate Trump all you want, but this is a disgrace. A forgotten washed up over the hill pornstar making a last ditch cash grab by trying to fluff up the shriveled remnants of her “career” before forever disappearing into obscurity while being stage managed by some shady lawyer trying to dig himself out of millions of dollars in debts. And this is what passes as a “profile in courage,” “speaking truth to power” ??? What a joke. This city is run by children. What’s next, giving Ed Buck a humanitarian award for his charitable outreach work to homeless persons of… Read more »

Weho is giving the key to the city to a woman for sleeping with a married man?

Who is the idiot that thought thinksmthismismamgood idea? This corrodes the good image of West Hollywood. I am embarrassed. Ismthismjust a move to bring WH into the national fray? I could give no f**ks about this woman who is merely a pawn in destroying our country. What good has she actually done? Her attorney is sketchy and facing bankruptcy charges. Seriously, how do we as citizens stop crap like this? I don’t care about what politics people endorse but this is our city. Not a BUMPER STICKER for the few that think this is progress. This does not improve the… Read more »

Off to a Duran start as mayor, honoring prostitutes, showboating on Santa Monica Blvd., and the most audacious immoral place to choose to hold his mayors swearing in. For those who resisted Duran you have lots of company. If you hate Trump you should hate Duran. They are the same on the right or left, disgusting representatives of the public trust.