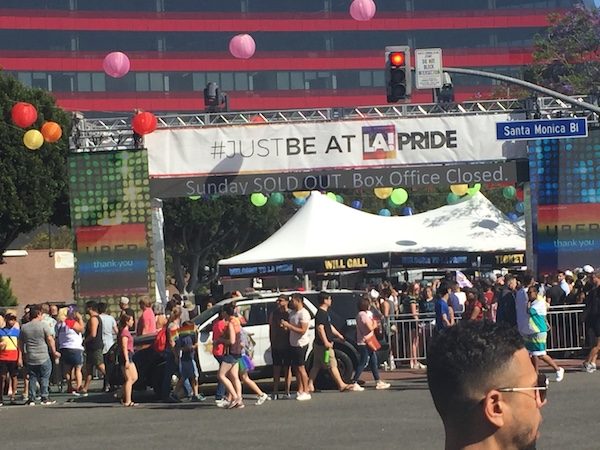 The annual LA Pride parade and its accompanying festival came to an unpleasant end today with hundreds of ticket-holders angry after being refused admission to the festival for the second day in a row.

As it did on Saturday, Christopher Street West, the non-profit that produces the event, said the event was overbooked and there wasn’t room for those who had been waiting in line for an hour or more to get into the festival. CSW ended the festival at 11 p.m. on Saturday, two hours ahead of the scheduled 1 a.m. closing.

Some of those who were turned away on Sunday were there because CSW had promised to accept their Saturday tickets for admission on Sunday as compensation for the earlier turn away. Tickets for one-day attendance are $30, not including processing fees.

People can request a refund by emailing help@seetickets.us or calling See Tickets at (323) 908-0607.

CSW’s abrupt closing of entry to the festival sparked hundreds if not thousands of any angry posts on Instagram and Twitter and coverage on local TV stations.

“I think the stuff going on with #LAPride is just more commercialization of pride,” tweeted Danielle Cher Aime @DeeCherAime. “It is shameful to sell more tickets than you have capacity for. The Stonewall riot and lgbt rights movement wasn’t about companies making money. Pride is about equality. Refund all tickets sold.” 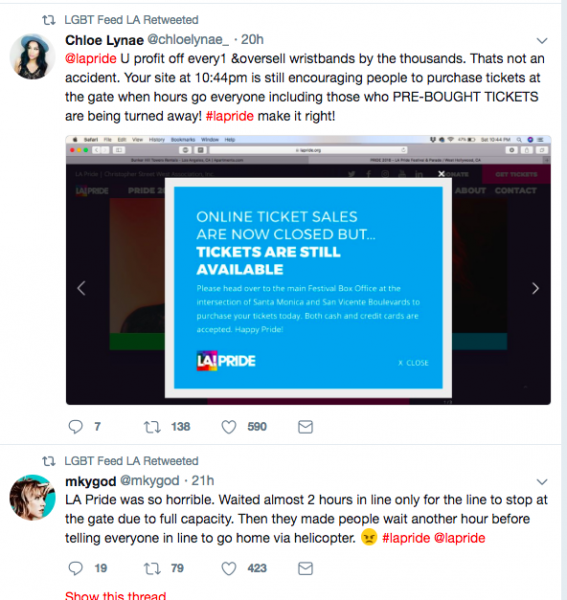 “@lapride U profit off every1 & oversell wristbands by the thousands,” tweeted Chloe Lynae @chloelynae on Saturday. “That’s not an accident. Your site at 10:44 p.m. is still encouraging people to purchase tickets at the gate when hours go everyone including those who PRE-BOUGHT TICKETS are being turned away. #lapride make it right!”

Manolo Ordonez @manolo_ordonez2 posted a tweet suggesting that he had purchase a plane ticket and tickets to the Pride festival, made a hotel reservation and took an Uber ride only to turned away from the festival after waiting three hours.

Sergio Aloma, captain of the West Hollywood Sheriff’s station, told WEHOville that only 15,000 to 16,000 people were allowed in the festival grounds at any one time.

“We’re thankful there was no serious injuries, but obviously there was overcrowding,” Aloma said.

On Saturday night as people exited the festival grounds, many were startled to see nearby sheriff’s deputies wearing helmets with protective visors. That was done as precaution after some people on the street had thrown plastic water bottles.

“With a large crowd, it can be unpredictable, so the deputies wore protective equipment for their own safety,” said Aloma. 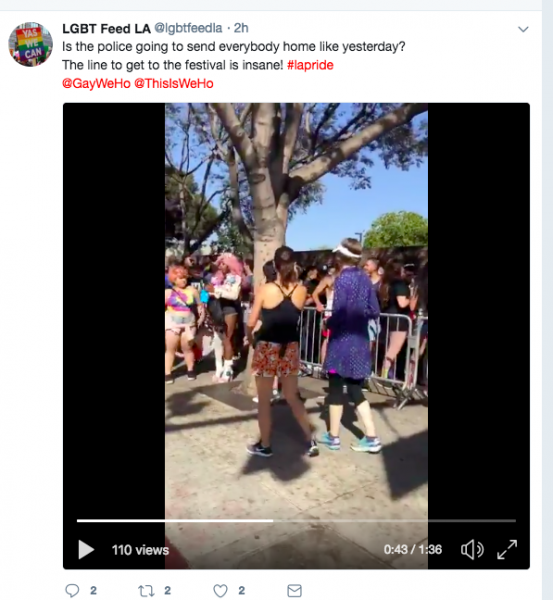 The City of West Hollywood issued a statement early today that said “attendance at the LA Pride Festival at West Hollywood Park reached capacity on the evening of Saturday, June 9, 2018. Crowd size and density became a safety concern. L.A. County Fire and L.A. County Sheriff’s made a joint decision to close entry to the Pride Festival and to safety disperse the crowd … This is the first time in the event’s decades-long history that it has been closed due to crowds … The City of West Hollywood will take steps to meet with Christopher Street West, the event organizer, to determine what occurred and to plan for future Pride celebrations.”

This year’s Pride parade and festival is the third to take place under the leadership of Chris Classen, who was forced to step aside as chairman of its board last month when WEHOville published a story revealing that he had pushed CSW to enter a potentially lucrative contract with Craig Bowers, a partner in his private events and marketing business. Bowers was given an exclusive contract to solicit sponsorships for the event at a commission of 20%. Such a contract with a non-profit executive’s private business partner is an apparent violation of state law and an absolute violation of non-profit ethical standards.

In 2016, Classen and Bowers and friends they selected for the CSW board of directors changed the focus of the Pride festival to a music festival. That outraged many LGBTQ community members, who complained about the reduction in programming for lesbian and transgender community members and CSW’s evident focus on generating money by marketing to millennials. While Classen told CSW board members it wasn’t clear whether the organization made or lost money on the event, an investigation by WEHOville showed the organization lost $396,000.

Classen has been replaced as chairman by relatively new board member Esteban Montemayor who led an effort to recruit a full-time director for CSW. That director, Madonna Cacciatore will take office on July 1. 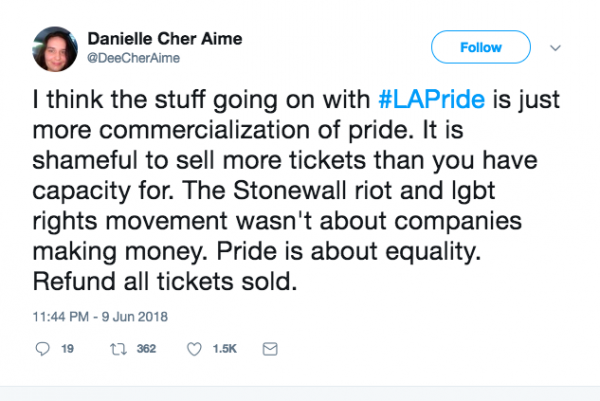 What’s very hard to understand is what is the point of this event? If “pride” is the focus and events like these have become very gentrified why is this not an event to educate ALL attendees to the CONTRIBUTIONS gays have made to this planet over time? To me, these events are golden opportunities to EDUCATE all who attend including gays themselves about our history, our art, our politics, our struggles and most importantly the enormity of what we as gay individuals have accomplished that have made this a better planet for all. Thats PRIDE. I’d like to see GIANT… Read more »

Great comment. But I think many millennials who haven’t witnessed people going through a civil rights movement, or an AIDS crisis, will always just see this as a party. We can raise more awareness and respect for our LGBT history, but I honestly (maybe I’m jaded) think that most will just breeze past it, as they go to the main stage, or the alcohol booth. Or a party, or a bar. We can improve on this, but some younger people aren’t going to even notice. For many of them, its just a party, now. And that’s OK, too. This event… Read more »

After our city council decided to build our mega million dollar library in a time where books have gone digital. Which took up a large portion of the foot print where pride once was on grass and the old tennis courts. And now with the mega million dollar park “Improvement” in motion making the “”Park” even smaller. The space our city leaders left for pride this year was smaller. So in our “Gay West Hollywood” we dont even have enough room to have our “Gay Pride Festival” . Just let that sink in. Who made pride smaller this year…

So we should give up park improvements for one annual event that lasts for 2 1/2 days? CSW should have appropriately dealt with the smaller footprint. They should have used PDC space or limited admissions to a much smaller amount of people. There are events all over Los Angeles, and event producers who know how to keep what happened last weekend from happening. I’m not sure what we lose once West Hollywood Park Phase II is complete, if anything, in terms of event space. The library has been there for years, at this point, and we haven’t had crowd control… Read more »

The fact that this happened again may be upsetting but, opens up some opportunity for a great deal of fun! 🙂 Just do what I did, send LA Pride/Christopher Street West Association, Inc. a copy of your résumé with a nice cover letter stating “hire me NOW, I couldn’t possibly do a worse job than you’ve been consistently doing!” I’ve had a number of projects that started out by someone getting in my face asking “oh so you think, you could do any better?” Also be sure to give them a Google and Yelp review!

One problem is the venue is smaller due to construction 🙁

You and Anonymous have done some great political work and exposure! Your efforts have had a great positive impact on many lives and, prevented a great deal of suffering. Please keep posting!

This event should be moved. West Hollywood is a very diverse city now…….and not an area that can tolerate the noise, trash, drunks, helicopters and police sirens for two nights. It’s noisy as it is.

Sorry…….but the park in WEHO is where I walk my dog and swim most days. Has nothing to do with supporting or not supporting gay rights. We as homeowners …are no longer supporting this in WEHO.

I am assuming this comment by ham is satirical.

I don’t live near the park. And I technically live half a block over the border, in Los Angeles, mid city West Hollywood. But I support this event, and always will. I’m proud to have it in my neighborhood, and want it in my neighborhood. I want CSW to manage it properly. I bought property here, knowing this event takes place, and it is part of the reason I want to live here. I can deal with people coming to West Hollywood for 3 days out of my year, and I think it supports the local economy a great deal.… Read more »

“Can you gays please get the hell out so I can continue my morning laps at the pool!” Exhibit A in why LA Pride has gone downhill for over a decade… There is no will from the community to make the festival a world-class event.

The LA Pride screen grab above is not good for CSW.

As others have said, put the festival where it belongs — in the city of Los Angeles. The bars along SMB would hate that, but haven’t we evolved?

There’s nothing from stopping city of LA from hiring a more professional organization to run the event downtown.
#dumpCSWfinally

West Hollywood is still the gay center of Los Angeles. Not just the bars, but the organizations, non-profits, and percentage of population that identify themselves as LGBT. CSW’s continuing dysfunction isn’t going to be solved by just moving this event. They need to fix the organization, and their new leadership might be able to. This situation is totally inexcusable, but I will say that it didn’t help that they had a very small footprint, with West Hollywood Park under construction.

DTLA has a Pride event, now. I say, let that grow, and see what happens.

I get what you mean about the gay community groups, so let the parade continue in West Hollywood. However, if SF can hold their festival away from the Castro, why can’t LA?

CSW has screwed up too many times. It’s time for a completely different management company to take over.

Because the Civic Center is a 10 minute Uber ride from the Castro, and walkable, even. Three or four subway stops away.

DTLA is over 7 miles away and not nearly as connected or accessible.

But I agree that they need new management, wherever they hold this event.

The Festival should be free like it is in many places around the U.S..

Amature night in Dixie. WEHO claims to be the creative city.

Take a look at those running LAPride. Pay for play on a kick back scenario serving the klutzes running it while those lining up for an hour are turned away.

Pathetic. Hire pros, hold it downtown next year where there is more room.