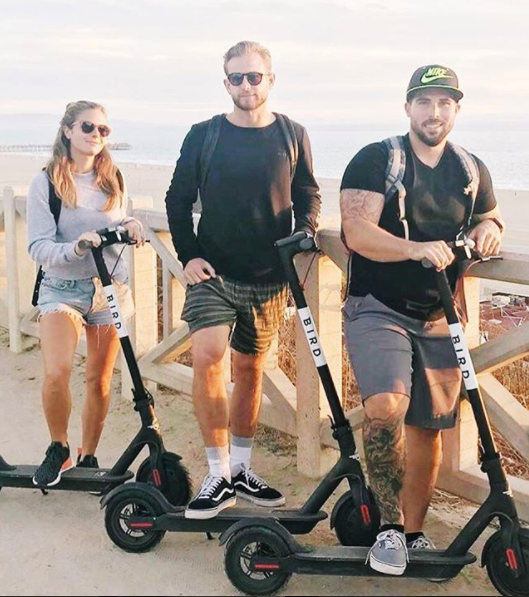 The Bird, the Bird. The Bird is the word. (And then there’s Lime, of course).

Those two e-scooter companies are leaders in the latest disruptive industry to pop up in American cities, and investors are betting hundreds of millions of dollars that they will be as successful as Airbnb and Uber. Monday night, the City of West Hollywood, which continues to struggle with regulating home sharing and ride hailing services, will decide how to deal with electric scooter sharing.

An item on the Council’s agenda proposes to authorize electric scooters for a six-month test. In a memo to the Council, City Hall staffers note that “electric scooter sharing systems are emerging nationwide and provide viable mobility solutions in regions with heavy traffic congestion.”

The systems allow a user to download a mobile phone app to find a nearby scooter and then book it for a ride. Bird charges an initial fee of $1 and 15 cents for each minute of use. Riders are required to wear a helmet and be at least 18 years old. The scooters can travel up to 15 miles per hour. Bird and Lime and others use GPS and other technologies to track the locations of the scooters. Some West Hollywood residents are using their own scooters, which can be purchased online for as little as $99.

The electric scooter companies use what are called dockless parking. That means a user can leave the scooter anywhere he or she wants, and the company will track it through GPS and pick it up. Some require that the scooters be left in virtual “corrals,” or designated places.

A memo to the Council from City Hall staffers note that the scooters use the public right-of-way.

The City Hall proposal would, during the six-month test period:

— Limit participants in the pilot program to three operators, each of whom would be issued permits for 50 scooters

— Require the scooter-sharing companies to provide the city access to data it can use to analyze the pilot program and learn the locations of the scooters for law enforcement and monitoring.

— Let the city place restrictions on hours of operation, number and location of scooter.

— Restrict parking of the scooters to certain areas.

— Require proof of insurance from the scooter owners.

“Staff would work with Transportation Commission to refine pilot program requirements,” the memo says. “A 6-month pilot program will allow the city to test the concept of private electric scooter sharing systems in West Hollywood, assess the quality of various vendors, and collect and analyze data upon the conclusion of the pilot program. Staff would return to Council with the findings from the pilot program to receive further direction.”

The scooter pilot program is likely to be opposed by some residents, who already have objected to bicycles on sidewalks in areas that don’t have bike lanes.

West Hollywood had its first experience with electric scooters in late March and early April when Lime, headquartered in San Mateo, suddenly dropped them on city sidewalks. While some residents were enthusiastic about them, others complained that they blocked pedestrian traffic and were a safety hazard.

Other Southern California cities are struggling to deal with the issue. The City of Santa Monica recently authorized an 18-month test of electric scooters and electric bikes the will begin in September. Santa Monica, where Bird is headquartered, sued the company last year for illegally distributing its scooters throughout the city. The lawsuit was settled in February with Bird agreeing to pay $300,000 in fines and to obtain a business license.

Santa Monica’s pilot program will require electric-scooter and electric-bike companies to apply for a permit and pay a $20,000 annual fee and a fee of $130 per vehicle.

The City Council will meet at 6:30 p.m. Monday at the City Council Chambers, 625 N. San Vicente Blvd. Parking is free in the five-story structure behind the Chambers with a ticket validated in the lobby.

This scooter program will be abused tremendously . They just want to dominate the sidewalks and expect pedestrians to give them the right-of-way! Never mind that we already as residents, and pedestrians, have to move aside with multiple tourists, teenagers and students, transients, homeless, and yes the workforce making no courtesy to signal and expect to speed past and it clutters the sidewalks. Let’s not forget what people on Segways do with these tour companies that give unpermitted tours in Beverly Hills and West Hollywood, it’s tourgide or 4 or 5 people at a time! I was almost collided with… Read more »

These companies are first and foremost disruptors offering you something trendy you didn’t know you needed.. They feel no responsibility to those caught in the wake. If you re silly enough to think this can be managed, think again. There is not enough code enforcement for other issues already on the books.

WALK! It will improve your health and well being.

Scooters are a fad just like bike sharing was fad and look at how that’s worked out for the City of WeHo? As a blind, disabled pedestrian who uses a Guide Dog to get from place to place, scooters represent a significant additional safety threat which me and my dog will have to negotiate. I can see many problems with blocking sidewalks, riding on sidewalks and causing accidents (scooters aren’t street legal unless they’re in bike lanes which are only on Santa Monica Blvd.). I’m not against finding better ways for people to get around but this scooter fad is… Read more »

Perhaps the drop off/parking locations could be in front of the City Council members personal residences, and City Hall?

This article isn’t accurate. They are already here……. :rollseyes: I’ve seen 4 this week.

Curious as to why “Bird electric scooter seemingly abandoned outside LASC on Santa Monica Boulevard.” was the caption picked for an image of a Bird parked out of the path of travel in a tree well?

If I could upload an image, I’d upload a picture of a car parked on the street with the caption “Car seemingly abandoned outside LASC on Santa Monica Boulevard.”

Yes, but the car is a designated parking space, and paying to use it. The scooter is tossed against a tree, so the comparison doesn’t really apply…

And “seemingly abandoned?” That’s how the program works! You leave it where you are done with it. They take up far much less clutter than the bike share program.

I think WEHOville needs to add sanity to the screening of comments. Some of these are totally ridiculous ramblings of some unhappy people.

Randy
Reply to  Get a grip

Hank is going to regulate inconsiderate and rude people, that is all. People who attack other commenters. I believe the nature of people who comment on internet articles (and, to a large degree, comment on Facebook posts) are complainers. People with negative opinions.

50% of bike riders run thru the stop signs on the street. Cars forget about. Trucks yesterday two

One of these things blocks my walking on a sidewalk and I’ll just pick it up and drop it in the nearest trash bin. I will not yield the right of way on a sidewalk to these things (and they will be ridden on sidewalks). I’m a big guy so please, ride your new toy on the sidewalk and while you are looking for the right play list – run into me. You will quickly find your ass on the ground hopefully with a broken tail bone.

This post will come in handy if and when you go through with your threatened physical act of violence, and are hopefully arrested for it.

A fuzzy area of concern for those who write regulations regarding all forms of wheeled vehicles. Sidewalks should be for pedestrians only – or why bother? Regulators need to pull their heads from those dark smelly places and take charge of this new direction of city transit. Until then be prepared to do battle with scooters, skateboards, cycles.

It is not against the law to ride a bicycle on a sidewalk, unless there is a specific designated area where it is illegal, and signs are posted (e.g., where bike lanes are on SMB). I believe a scooter is a “motorized vehicle,” and is not allowed at all (I could be incorrect about this). I find it kind of ironic, as they weigh far less, and don’t go nearly as fast. That said, I’m not saying they should be allowed on the sidewalk, but if they are not, already, and bicycles are, that makes no sense to me.

Who cares what you all think. I just want to know who is the guy with the tattoos? 😂

I don’t think these things should be allowed on sidewalks, just like skateboards and bikes. If a pedestrian is hit by any of those three while on the sidewalk. He/She could fall backwards, hit his/her head on the concrete and die from internal bleeding before the paramedics arrive. My Partner, a Nurse Practitioner Trauma Specialist sees this often in the ER. This just opens the City up to more lawsuits. City Council should take that issue off the Agenda. I agree with everything “wehoboy” said.

Love the Bird…please give them a chance! makes getting around a breeze.

As long as they wear helmets and ride in the street, not the sidewalk.

YES and, the Wehoville should pictured the people with scooters, wearing their helmets!

I’m for them as long as they are ridden on the streets and not sidewalks.