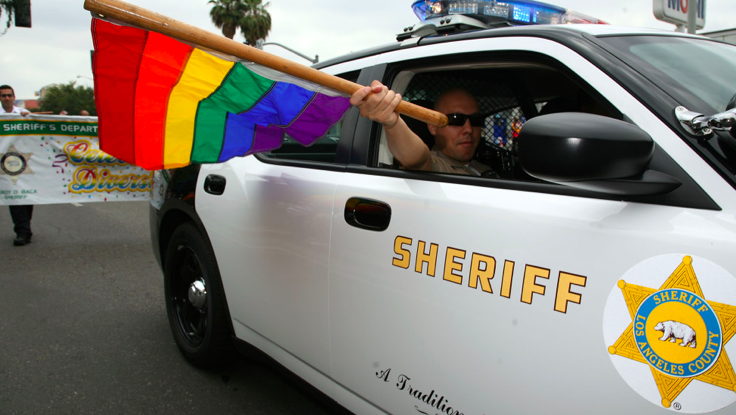 A well-financed residents’ group of political newcomers – all gay men with a grudge against the Los Angeles County Sheriff’s Department – sponsored a ballot proposition in 1992 that would have created a West Hollywood police force if its insurgent campaign for voter approval had succeeded. The measure lost 53% to 47%.

Most voters saw the initiative as presented by the West Hollywood Citizens for Better Police Protection, the name members gave the group, as solely a gay issue. Ominously, they said the proposition came across as “a drive to create a gay police force by a fringe faction of the city’s homosexual community,” the Los Angeles Times reported. The newspaper’s article, moreover, quoted residents as saying they believed gay extremists were trying to “take over” the city.

John Fairchild, a local gay activist and longtime advocate of local control of policing, largely bankrolled the campaign, which reportedly spent about $50,000. The group claimed that the existing “police force” – the Sheriff’s Department, which had supplied public safety and protection services since incorporation eight years earlier – was hopelessly insensitive to gays, who comprised one-third of the city’s population.

Members pointed to longstanding gay resentment of the Sheriff’s Department, which had no gay deputies at the time. Simultaneously, they played on frustration over Gov. Pete Wilson’s veto of a major gay rights bill the previous year that sent huge numbers of protestors through city streets for days on end.

Most voters, however, perceived other issues at work behind Proposition AA, as it was named. Such concerns all but drove a wedge between gays and heterosexuals in a city where gay rights causes typically won support across all political and social lines.

“When we were at the polls yesterday, I got a feeling that people were very, very angry – the perception that the gay community was trying to take over,” Ruth Williams, head of the Save Our Sheriff coalition that opposed the initiative, told the Times. Williams now is chair of the city’s Public Safety Commission.

The alliance she led consisted of nearly every business group, the City Council as well as the renters’ rights group, the Coalition for Economic Survival – a who’s who of West Hollywood’s political establishment. “It’s not a gay city. It’s a diverse city. We have to live together. We have to work together,” she added.

More specifically, Bronwen McGarva, a gay member of the city’s Public Safety Commission, said, “They already have rights in the city and now they want to change law enforcement that makes West Hollywood a decent place to live. If I were straight, it would show to me that they aren’t as concerned with law enforcement and citizen safety as they are their own special interest.”

Other residents the Times interviewed said as much. “They want to be accepted into this community, and that’s great, but I don’t think it should be through an authority like a police department,” Jill Lowy said.

Another resident, film student Michael Johnson, said, “It’s the extremists in the city that are pushing it for all the wrong reasons.”

By deciding to support their local sheriff, voters gave the go-ahead for the City Council to continue its contract for protection services with the Sheriff’s Department – valued at $8.4 million at the time – that had been in place since cityhood. Proposition AA in 1992 has been the only serious attempt at creating a city police department – and most likely, its defeat settled the issue once and for all.

The Way We Weren’t

A community-based police force was an issue that had lingered in the background since incorporation efforts when rent control took priority. In the years that followed, civic leaders were too busy creating a new city, and besides, they believed setting up a police force would bankrupt West Hollywood.

Those who supported Proposition AA, on the other hand, believed ending the city’s contract with the Sheriff’s Department for public safety services, and creating an independent police force in its place, would be the final step in the city’s coming of age.

The timing seemed propitious for the ballot measure, given the prominence of homosexual rights issues in the 1992 presidential election. Then the Kolts Report hit a few months before voters went to the polls. The report was a review of the Sheriff’s Department prompted by a surge in officer-involved shootings of minorities.

It found “a deeply disturbing use of excessive force and mistreatment of minorities by the Sheriff’s Department.”

West Hollywood, though, was highlighted as a “paradigm of community-based policing.”

Supporters hoped those elements would meld gay residents into a solid voting block – for once – to get their goal of a community-based police force approved.

Good things still came from all the rancor caused by West Hollywood Citizens for Better Police Protection, the Los Angeles Times noted. The Sheriff’s Department began showing a new openness for making improvements, by all accounts, setting in motion numerous changes that made it far more responsive to the entire community.

The newspaper followed up again in 2002 and found that “Today, several openly gay deputies serve at the (West Hollywood Sheriff’s) station; it is a presence that was unimaginable a decade ago.” The article continued with a quote from Ivy Bottini, co-chairwoman of the Lesbian and Gay Advisory Board then, saying, “It’s been a long, long journey, but the deputies are now part of the community. And the community respects what they do.”

Thanks for the flash back. By way of correction it was Chris Fairchild who was the driving force behind the effort which really helped mobilize the gay community during the 1992 Presidential Election. The campaign put the City and the Sheriff’s Department that LGBT issues could not be ignored or put off with window dressing. But things did not change overnight; entrapment continued to be a recurring issue until the early 2000’s, culminating in the revelation that the Sheriff was engaged in aggressive entrapment in the bathrooms of the Pacific Design Center. While many of the issues have changed it… Read more »

Wha…?? Is this National Rub Salt in Old Wounds Day? And is this 2018 or 1958? I can understand a quote from the LA Times (who was so anti-gay in 1992 they’d throw Pride to a paragraph along with a shocking photo to the back of the paper then) but to use the term in a paper serving the GAY community in 2018 is rather surprising. Completely left out of this article, too, is the ENTRAPMENT that the Sheriff’s department was conducting as late as the late 1990’s/early 2000’s to arrest gay men for having sex in public places. It… Read more »