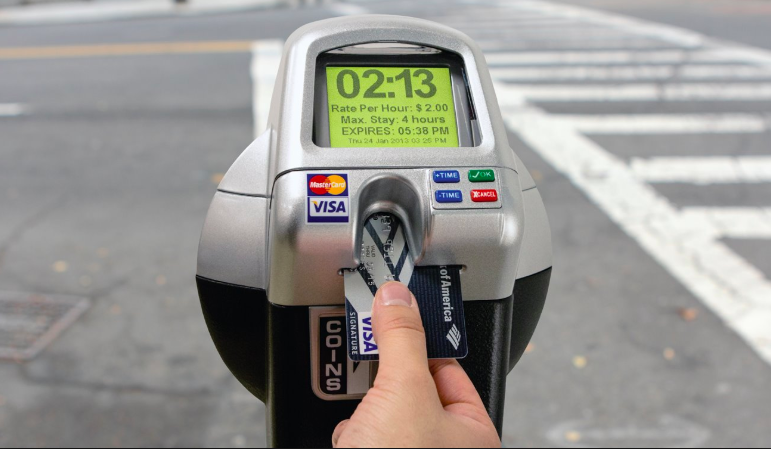 If you were using a debit card, you may not have noticed. But if you count on quarters to park, you probably were digging deep in your pockets in West Hollywood today.

Today is the day the City Council’s vote to raise parking meter fees by a third (to $2 an hour) officially took effect.

The City Council approved the fee increase in April with the understanding that it would generate $1.78 million in new revenue that will be used to improve sidewalk cleaning and security in commercial areas.

The increase is expected to raise $1.78 million, which the city will use to increase sidewalk cleaning and security in commercial areas.

“The City of West Hollywood is one of the most beautiful places anywhere in the world,” said West Hollywood Mayor John Duran in an announcement of the implementation of the fee increase. “With a modest increase in our parking meter rates, we’re going to maintain our beautiful city by investing in cleaner sidewalks, safer parks, and more services for the benefit of residents, businesses and visitors.”

“The sidewalk cleaning program will use a process that removes deep stains, grime and gum and uses specialized equipment with a deep-penetrating concrete sealer, which gets applied to provide a uniform sidewalk surface,” explained the city’s announcement. “The environmentally friendly process allows for the capture, filtering, and reuse of water to minimize waste. The process was successfully tested in a pilot program, launched in 2017, that focused on four test site locations on the north side of Santa Monica Boulevard (at San Vicente Boulevard, at Fairfax Avenue, and at La Brea Avenue) and on the north side of Sunset Boulevard at Hammond Street. The enhanced program will expand the process to sidewalks in commercial areas in locations throughout the city and areas heavily impacted by pedestrian traffic will be cleaned on a weekly basis.”

Money also will be spent to increase security services now provided by the Block by Block security ambassadors, who patrol parts of the city on bicycles and alert law enforcement officers to crime. There will also be an expansion of security services offered by PacWest in West Hollywood Park and Plummer Park.

The city also intends to add to the after-hours nighttime clean-up services in areas such as the Sunset Strip and the Santa Monica Boulevard bar area and to expand daytime trash and litter pick-up by hand crews as well as shopping cart removal services.

All five Council members voted for the fee changes in April. However, while Councilmember Lauren Meister said she supported the plan to increase sidewalk cleaning and security she said she was concerned that the fee hike would intimidate visitors.

Meister asked that City Hall review parking meter pricing plans in other cities, citing Redondo Beach. She also asked the city to consider two levels of pricing for fines for violating parking meter time limits – a lower fine if the violation is no more than 10 minutes and a higher fine if it is more than 10 minutes. Currently the fine is $53 for exceeding the time paid for at a meter.

Like most other cities, West Hollywood uses parking meters to encourage a turnover in cars parked on commercial streets such as Santa Monica, Sunset, La Cienega and Robertson boulevards. Such turnover makes it easier for customers to visit local businesses. Longer term parking is available in parking structures such as the one on Kings Road at Santa Monica.

In Redondo Beach, residents are able to buy an annual permit for $110 that allows them to park for up to 72 hours at a meter without paying the hourly fee. Employees of city businesses can purchase similar passes for $60 a year.

Parking meter rates in some other cities vary according to their location. For example, Beverly Hills parking meter rates range from $2 to 75 cents an hour, depending on where the meter is located. The rate is highest in highly trafficked commercial areas such as Robertson Boulevard and the commercial district bounded by Santa Monica and Wilshire boulevards and Rexford Drive.

A progressive city would raise parking rates not to raise revenue, but to properly manage curb space. The rates should be high enough that you can always find a spot when you need it, rather than endlessly circling the block. If increased revenue comes as a result, that is a bonus, but it should not be the main factor. Even better would be to have variable rates in different locations and at different times of day.

I’m practically missing the smell of vomit and urine already. I will want to park for hours now! Maybe we should put extra tariffs on visitors from foriegn countries to get more fees!!!!! Fees Fees Fees!!!!

On the one hand, $2/hour is not outrageous. And it’s definitely cheaper than valet, or a parking lot, or getting a parking ticket. If that pays for sidewalk cleaning, great. On the other hand, West Hollywood wouldn’t have to foot the bill at all if they required business owners to maintain the sidewalk in front of their locations. If you don’t like the way the city is being run, vote the bums out. But no. We don’t do anything and the same career politicians keep getting re-elected over and over and over. So, yeah, keep doing your work out and… Read more »

Hamburger Mary’s has so much vomit on their sidewalks, that it is sometimes safer to walk in the street. They never wash it down, and sometimes it just sits there till it dries. I don’t know if it is the food or too much drinking or a combo, but it is becoming known as the the vomit zone over there.

Hello Code Compliance! Why can’t code compliance compel business owners to keep their facilities and surrounding sidewalks in clean presentable condition? As I mentioned get the city council members to spearhead a sidewalk scrubbing detail regularly in partnership w business owners. The residential areas are also in need, particularly the sidewalks underneath flowering trees like Jacaranda when mixed with dog litter.

So much anger, exaggeration and entitlement in wehoville comments anymore. You people have it good in weho. Move to LA and see what kind of services you get, or should I say, don’t get.

Soap & Water
Reply to  Get over yourselves

Cy Husain
Reply to  Get over yourselves

Having been forced to live in many parts of LA, I understand first hand the validity of the point you made. Many of the spoiled brats complaining on the WEHOville comments don’t realize how good they have it in the Great City of West Hollywood! Yes there is serious room for improvement but, the City Council will at-least listen to you and, in many cases take action to fix problems. Try living in East LA! I did that while earning a few Degrees out of Cal State LA. The pathologically criminally insane people I encountered on a daily basis made… Read more »

And people love clean sidewalks (especially the gays), so expect more gay people in West Hollywood when we wash and pave our streets with gold like its Wizard of Oz here.

Have the bars that contribute most of the problem clean the sidewalks. Why should patrons of Joey’s and Sammy’s Thai pay more to park to the city can clean up after Hamburger Mary’s puking customers?

Why don’t members of the West Hollywood City Council donate their pay to play money, donated from the all male white developers, towards a parking fee subsidy?

The members of the city council should participate in a community sidewalk scrubbing detail. That’s what normal business owners that are not entitled do. Heck if you were in London you’d be polishing your brass door knockers and name plates. West Hollywood is seedier than seedy.

Mayor Duran’s statement about West Hollywood being one of the most beautiful places in the world is mighty disingenuous. While it has its attributes, perhaps Mr. Duran hasn’t traveled much and may need new glasses. He also has been oblivious to the filthy sidewalks which have existed forever. Cleanliness, soap and water are the easiest and cheapest ways to insure upkeep.

So this new program is intended to “improve” sidewalk cleaning which most folks can agree has been “non existent”. Please consider a more appropriate budget adjustment as this just seems hard to believe.

Greed gone wild. They dont care about working class individuals they are moving the direction to luxury apartments, more high end hotels to get the tax off of them. And the gay is in the way, soon the factory that has gay nights will be replaced by a 9 story 241 room hotel. And the sad thing is once the gay area is slowly developed away its gone forever. And three of our sitting council members who are their to Shepard our gay weho have been bought out by developers. So sad to see our gay brothers on city council… Read more »

A “gay ghetto” is tired and is finished just about everywhere. We’re going upscale and the change is refreshing, it’s also economics (supply and demand) and geography. Our border is Beverly Hills. Relax. the gays aren’t leaving in mass and if they did it’s for a better pasture. I think you’ll just get more professional gays/bi/straight/trans living in the area who aren’t obsessed with their sexuality and identity. Though it will still attract some vain and materialistic people as it always has. CA is an expensive place to live unless you want to live on the opposite side of where… Read more »

Although I’m saddened by this, I agree. I don’t think they should be allowed to make zoning exceptions, however. What is the point in having them in the first place? I’m not convinced that the Robertson Lane project won’t create even more traffic problems, where there are those already. But regarding the bars and restaurants about to pop up next to Motherlode, I don’t think it is the city’s responsibility to “make sure they are gay” (how would they do that?), or deny the projects, just to prevent the city from having its gay identity erode. It is a free… Read more »

Yes, and that automated parking garage!