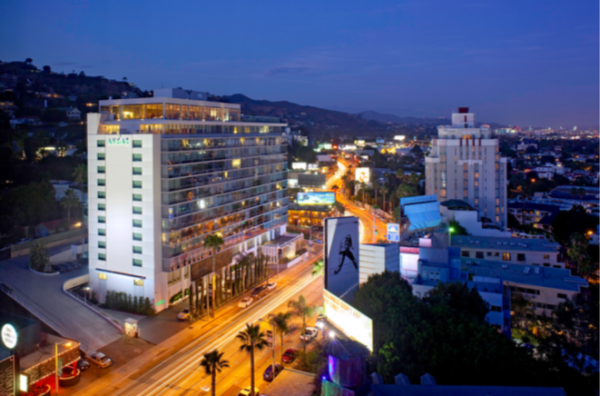 The Sunset Trip, which launched, last month, offers free rides to Sunset Strip venues on Fridays and Saturdays from 7 p.m. to 3 a.m. and connects with stops on neighboring streets, including Santa Monica Boulevard, where riders can transfer to the PickUp free shuttle.

This year’s Summer on Sunset is dubbed “a tribute to the summer of love,” which is a reference to the gathering in San Francisco’s Haight-Ashbury in 1967 of nearly 100,000 young people to join a community of artists, musicians, poets and political and cultural radicals. That also calls out the Strip’s history in the 1960s, when hippies, musicians and artists flooded the streets of West Hollywood. Mayor John Duran has said that promoting the Sunset Strip is a major goal of his term. He and Councilmember John D’Amico have called for studies on ways to do that.

While the area has a thriving array of hotels, changes in today’s music culture have had an impact on the rock clubs such as Whisky a Go Go and the Roxy and The Troubadour, which became famous by hosting performers like Led Zeppelin, The Doors, Elton John, Janis Joplin, Jimi Hendrix and Jim Morrison. In 2015, the Sunset Strip Music Festival was shut down after incurring millions in losses.

The Travel + Tourism Board is calling out a series of repeating and special events and discounts offered to visitors to the Strip.

“Over fifty years after the ‘Summer of Love,’ we look back at this influential time and are inspired by a socio-cultural movement stemming from a season of romance,” said Tom Kiely, president & CEO of West Hollywood Travel + Tourism Board. “West Hollywood has always been a creative and progressive city that embodies the quintessential L.A. lifestyle. As the Sunset Strip continues to blaze its own path as a world-famous cultural landmark, setting trends in music, hotels, dining, and design, we invite those from near and far to fall in love with the Strip’s rebellious, forward- thinking spirit.”

Through Sept. 3, the Summer on Sunset campaign offers $100 toward the cost of a two-night stay hotel participating in the event (reservations must be made through reservations.visitwesthollywood.com) and a Summer on Sunset discount card valued at $200. Other promotional offers include half-price cocktails at Cabo Cantina and Sunset Trocadero; complimentary small plates at The Jeremy West Hollywood’s Joao Cocktail Bar; complimentary beverages with the purchase of an entrée at The Den on Sunset, BOA, Katana and ROKU, and 20% off the entire bill at restaurants including Pearl’s and Rock & Reilly’s, among others.

Events and venues promoted this summer include the following:

— The Viper Room. The Sunset Jam brings together the top touring musicians in a completely unrehearsed night of live music, every Monday at 8:30 p.m.

— The Standard. KCRW’s DJ Valida curates two acoustic musical acts to perform unplugged in the Cactus Lounge every Wednesday at 7 p.m. for an evening evoking an impromptu jam in a musician’s living room

— Sunset Marquis. Serving as a home away from home for musicians for more than 50 years, Sunset Marquis continues its tradition, the acoustic music showcase, Live@Sunset Marquis, on select Fridays this summer (June 29, July 13, Aug. 3 and 24)

— Andaz West Hollywood. A legendary rock n’ roll hotel formerly known as the “Riot Hyatt,” Andaz West Hollywood will host “Sunsets on Sunset” every Thursday from 5 to 9 p.m., where guests and locals can enjoy music, food, cocktails and games while taking in the 360 degree views from th rooftop pool

— London West Hollywood. The London’s Boxwood on the Roof celebrates the season of love with live music by Jacob Mondry on Wednesday nights, a Crystal Cocktail menu on Tuesdays, and Ice Cream Sundays.

John Duran is waving at a parade that long passed him bye. Like Normand Desmond. The Sunset Strip is a prime collection of hideous billboards who support the klutz political hacks running WEHO. At least they disguise what Frank Gehry would call 98% SH-T modern architecture.

Mayor Duran to Mr. DeMille: “I’m ready for my closeup!”
Now everyone wave bye, bye.
Thank you for your service, it’s time to move on.

Fyi with some trivia, I’ve lived on Sunset Plaza since hippie days when you had to climb over people who were having an ongoing party on the Strip sidewalk. The way the city finally dealt with that was a law about no overnight parking — when they couldn’t keep vans parked, they packed up and left.

Well maybe the solution to the problem is getting the hippies and artists with their vans back! They were a-lot like a Scooby-Doo cartoon, where these young people live in a van and, solve the problems of the communities they encounter. You know the part where the unmasked phantom that everyone was terrified of, ends being an unscrupulous capitalist trying to take advantage of everyone? As the greedy business crooks are being hauled away by law enforcement they angrily proclaim “and I would have gotten away with it too, if it weren’t for you meddling kids!” YES, I can see… Read more »

Now if they can only change the attitude problems on some parts of the Strip, maybe more people would show up. I took a walk on the Strip last night and overhead a handsome, middle aged man and his gal say “they wouldn’t let me in because I had shorts on, but they let the dude with the skirt on in the club.”

This is good that we have a FREE trolley going up Sunset and picking up on Santa Monica Boulevard, even better yet would be if we completely shut down any access to private automobiles on Sunset and Santa Monica. 🙂 It should be just like the Third Street Promenade in Santa Monica that is only accessible to traffic by public transit and electric scooters. The private automobiles and the snobs who own them are the single biggest problem around. YES I know we are having a problem recently with happy fun electric scooters being left all over the place, creating… Read more »

Wow, another long-winded rant filled with generalizations but thanks for the free speech. I’ve often thought about a promenade like street but it’s not practical in this area. The strip will always have flashy cars that people want to ride to the hotels. People don’t want to entirely give up their cars, it will never happen in Los Angeles so move on from it. Nor is it practical for all types of commutes and events. We don’t want to take away freedoms from people. With consciousness and educations people find ways to commute (like the free trolleys, ride sharing, etc.)… Read more »

Well I could easily of backed up my positions with links to verifiable sources as I have done in the past but, then I keep getting complaints about promoting certain sites and grabbing control the comment section. As for your tribute to “Free Speech,” I have NEVER been able to publish anything beyond a few obscure academic journals and radical newspapers. This in-spite of having well sourced articles and, even credentials in the areas I’m writing about. This is in stark contrast to what we see from many right-wing conservatives, with NO SCIENCE background what so ever but, they are… Read more »

Good Luck! Another🙄🙄idea from Mayor “Sunset” Duran. The strip is dead and dying except for those lune standees at the Rock clubs who all look one step removed from being destitute. The Sunset Plaza shops are in game of musical chairs with folks not renewing or bailing on leases. The stalwarts are hanging in but there seems to be no THERE there!🙄

that was…. long line of standees at the rock clubs………