The rally is a protest of Trump’s nominee for the U.S. Supreme Court. It will take place at 5:30 p.m. at the park, which is at the intersection of Santa Monica and Crescent Heights boulevards. 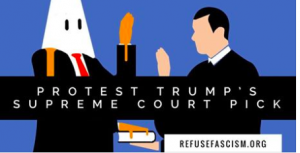 “There is no electoral road to stopping Trump’s fascist Supreme Court pick,” said Sunsara Taylor, a spokesperson for the group. “But that doesn’t mean we have to accept it. It means is we have to step outside politics-as-usual and wage a mass, nonviolent political struggle that not only stops this Supreme Court pick, but keeps going until we have driven the whole Trump/Pence regime from power.”

At the rally, RefuseFascism.org’s Los Angeles chapter will issue a statement repudiating Trump’s Supreme Court and unveil seven new five-foot tall posters containing “indictments of the Trump/Pence regime” which the group says “comprehensively detail the crimes already carried out by the Trump/Pence regime against Muslims; against immigrants; against women and LGTBQ people; against the people of the world through war; against truth, science and the environment; and against Black people and other people of color. Taken together, these paint an irrefutable picture of the a vicious American fascism being imposed by the Trump/Pence regime which must be stopped.

Tonight’s protest is one of several being held nationwide by RefuseFascism.org that will demand the removal of Trump and his vice president, Mike Pence.

Unproductive. Unhelpful. Will cause traffic delays for people who are already against the current administration. Focus on the midterms.

I’m sure to no one’s surprise you could of guessed that I attended the rally, if for no other reason to debunk all the comments posted by those who opposed it and, never attended. Attending political rallies will by no means have an adverse effect on the midterm elections, quite the contrary. It is important for people (most especially oppressed minority groups) to know in a very practical way that they are NOT alone in their points of view. Progressive political movements have lost badly in many instances when their supporters feel isolated and unsupported, to the point that elite… Read more »