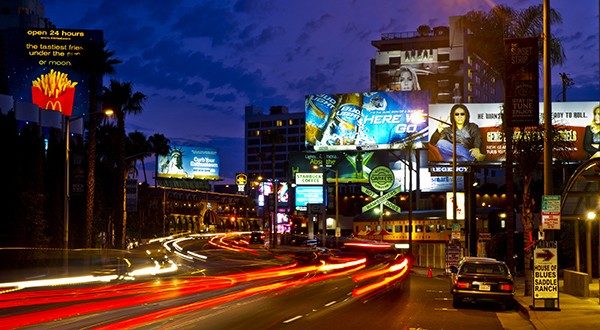 With a slew of new upscale hotels coming to the Sunset Strip and the number of visitors to the boulevard set to rise, the challenge for the Strip’s hospitality businesses is to ensure that these affluent new visitors find the sort of nightlife they seek on the Strip, rather than driving off to restaurants and nightclubs in Hollywood or Beverly Hills. One solution is to revive the business for which the Strip became world famous nearly in 1930s – a lucrative form of entertainment that could generate millions in new tax revenue every year: Gambling.

The cranes towering over hotel construction sites on the Strip have become a familiar sight recently – and plans for new hotels could keep the cranes busy on the boulevard for years to come. In addition to the Jeremy West Hollywood Hotel, which opened recently at Sunset and La Cienega, two hotels are currently under construction, one at Doheny and the other at Olive – and at least four more hotel projects are in planning stages.

These new hotels would add more than 1,000 rooms to the Strip, increasing its current capacity of about 2,300 rooms nearly by half. The new hotels all appear marketed to affluent, theoretically older guests – a factor that could skew the youthful demographics of the Strip’s nightlife, undercutting the edgy, rock-‘n-roll image it has cultivated since the 1960s when it was ground zero in the rise of rock ‘n roll.

It’s likely the rock ‘n roll scene will have a limited appeal to the older, well-heeled visitors who’ll be checking into the Strip’s new hotels. So is there a way to provide upscale entertainment and preserve the Strip’s signature street cred?

If past is prologue, the answer is yes. To get a sense of the Strip’s future, a deeper look into its past may reveal the shape of things to come.

In the Sunset Strip’s earliest incarnation, in the 1930s and ‘40s, Hollywood stars, studio executives and their entourages could be seen in its exclusive cafes, restaurants and nightclubs on a nightly basis. While the stars drank, dined, danced and misbehaved, gossip writers mingled among them, making notes on the actors’ breakups and romances, brawls and other peccadillos that were published in syndicated columns nationwide the next day. All this publicity established the Sunset Strip in the public imagination as Hollywood’s backyard playground.

Among those in the know, however, the Strip had a darker side. It was a place where anyone who could afford it could find just about anything he or she might want. Drugs were freely available, as was booze during Prohibition – as was sex, through outcall services and brothels operating in houses in the hills overlooking Sunset. But the Strip’s signature vice – the activity it was known for in rarified circles around the world – was gambling.

In fact, gambling on the Sunset Strip in the first half of the 20th century was what rock ‘n roll became in the second half (except that gambling was much more lucrative). Put another way, the Sunset Strip was the Las Vegas – or perhaps the Monte Carlo – of its day.

Then, as now, gambling was illegal in California. Because it was a business conducted under the table, much of what is known about gambling on the Strip is anecdotal. Several infamous gamblers operated clubs on the Strip. If, say, Eddie Nealis, Nola Hahn, Felix Young, Homer “Slim” Gordon or George “Goldie” Goldenberg was associated with a nightclub, odds were better than even that it was gambling joint.

One of the biggest gamblers was Billy Wilkerson, the founder and publisher of The Hollywood Reporter. The Strip’s most influential style setter in its formative years, Wilkerson launched two of its most famous clubs – Café Trocadero in 1934 and Ciro’s in 1940 – and a four-star restaurant, La Rue in Sunset Plaza, in 1944. (Trocadero was demolished long ago, but Ciro’s is now the Comedy Store and La Rue was until recently a Nicole Miller store.)

Both Café Trocadero and Ciro’s had private rooms where studio executives joined Wilkerson once a week for high-stakes games. Wilkerson was known to wager and lose The Hollywood Reporter’s entire weekly payroll at the table. By 1941 he had accumulated $1 million in gambling debt – that’s nearly $18 million today. In the mid-1940s, Wilkerson set out to Las Vegas to build the Flamingo, a casino he’d designed in his trademark Sunset Strip style. He soon ran out of money and lost the project to mobster Benjamin “Bugsy” Siegel. Siegel famously mismanaged the construction while taking an audacious skim off the top. He was assassinated in June 1947, not long after the Flamingo opened.

The Sunset Strip was also home to a couple of hidden-in-plain sight casinos – the Old Colony Club on Alta Loma and, at the top of La Cienega, the Clover Club, the most exclusive of all. There moguls like “Gone with the Wind” producer David O. Selznick and Paramount executive B.P. Schulberg lost fortunes nightly. One famous director is known to have dropped $10,000 – $180,000 in today’s money – at the Clover Club on a regular basis.

Starting in the mid-1930s, the East Coast crime syndicate assumed control of gambling on the Strip through their man in Los Angeles, Bugsy Siegel. Although the amount of revenue generated by Siegel’s operation will never be known, an incident on New Year’s Eve 1945 offers some insight. That night Siegel sent his top henchman, Mickey Cohen, to the Strip to raid a rival’s popup casino. According to news accounts, Cohen’s heist from the cashier’s cage was $75,000 – $1 million dollars today.

Given that there were a half-dozen or more gaming rooms operating on the Strip at any given time, if each of them took in just $15,000 five nights a week, the annual combined revenues of Siegel’s operation would have been as much as $25 million – nearly $450 million today – every penny of which was illegal.

After Siegel’s assassination, Mickey Cohen was anointed to take his place. Cohen’s promotion did not sit well with a local rival, and in the bloody gang war that ensued, Cohen was attacked twice by gunmen on the Strip. In the second one – outside Sherry’s nightclub (at 9039 Sunset, where 1Oak is now) – Cohen and several others were wounded, and a bodyguard was killed. The brazenness of the attacks caused an outcry that sent shockwaves from Sacramento to the White House. Within a few years, the era of big gambling on the Strip was over.

So what is the case now for bringing it back? An important factor is that times have changed. Nevada has had legal gambling since the 1930s, and now some form of gambling is legal in nearly a dozen states. There are about 200 casinos owned by Native American nations across the country, and earlier this year the Supreme Court legalized sports betting nationwide. All these experiments have proved that legalized gambling can be managed safely and profitably.

The money is another factor. Reviving gambling on the Strip might not generate the hundreds of millions that Bugsy Siegel’s operation did, but it could produce enough tax revenue to fund healthcare programs, expand services for the elderly, upgrade infrastructure, build new parks and other worthy causes.

And the return of gambling to the Strip might even sharpen the image it has cultivated all these years: Its edge.

A bright and shiny but sleazy town….then and now. Pockets of class but ultimately overrun by grifters. Duran fits right in and will likely exploit the Native Americans in some strange way giving them keys to the city. They are better that this possibility.

Duran will enthusiastically support this idea because it translates into even more revenue for WeHo. He might even “discover” he is part Native American and “locate” a portion of the city his “tribe” owns, so the casino building can begin. And I’m certain he’ll invite Stormy back to cut the opening day ribbon.

“OBSERVER” You screen name is the most accurate I’ve seen. Anyone who watched just portions of a couple city meetings would be able to see EXACTLY what you describe … If the actually paid attention to what is going on regularly as you very very accurately predict the type of response he will give. Kudos! We all should pay attention to what is going on in open sight changing our city into a construction zone from end to end. 🙂

“the East Coast crime syndicate assumed control of gambling on the Strip”
Gee, maybe this time around they’ll take control of Council back from the land developers.

Way too🤣
Reply to  WeHoMikey

RECALL Pilgrim that changing demographics in Los Angeles significantly contributed to the reactionary white male East Coast mobsters being run out of here in the first place. Given the current demographics of Los Angeles, if the East Coast mobsters attempt to return and take over again (ore even the republicans for that matter), it would be like a remake of “Escape from L.A.” for them. This is even assuming the men here choose NOT to get involved!

They would fit right in with Mayor Durand.

Isn’t gambling illegal in California? And this article talks about the old old HISTORY of the unincorporated portion of L.A. Now the City of WeHo. GET BACK THE OLD DAY??? There is almost nothing left to tear down, nothing left of the very old days this article refers to (thank god), and It seems like the first toe in the water for the City (who is obscenely rich per capita) to get EVEN MORE REVENUE. “THE STRIP” has gone through many changes. This latest 5-7 years of MASSIVE REZONING and OVERBUILDING makes me miss the OLD WEHO of 15 years… Read more »

What a wonderful, informative article. Nice to read a well written, factual, well researched piece of writing. Bravo to the author.