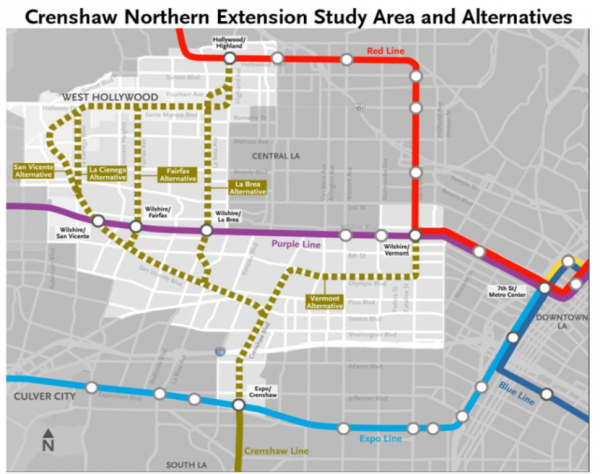 The L.A. Metropolitan Transportation Authority’s board of directors on Thursday will review a study that outlines the pros and cons of five options for routes of the Crenshaw Northern Extension, four of which involve West Hollywood. Those options include a routing up Vermont Avenue that doesn’t cross West Hollywood at all.

A major concern is the cost of the options. The Crenshaw Extension will be funded by a one-half cent increase in the sales tax authorized by the passage of Measure M in 2016 for a variety of public transit projects across Los Angeles County. Metro has allocated $2.24 billion for the Crenshaw Extension.

“A key outcome of the study was the finding that all the alternatives studied exceed the funding allocation, some by approximately double,” says a report on the study. “Broader public/stakeholder outreach is needed to obtain input on these five alignments, along with potential additional technical study, to prepare the project for subsequent environmental review.”

The routes that look likely to provide the most benefit to WeHo are the San Vicente Route and the La Cienega Route. Each of those would take Metro trains through dense areas of the city. Routing the extension along Fairfax Avenue means fewer connections with businesses and institutions such as Cedars-Sinai Medical Center and the West Hollywood Library. 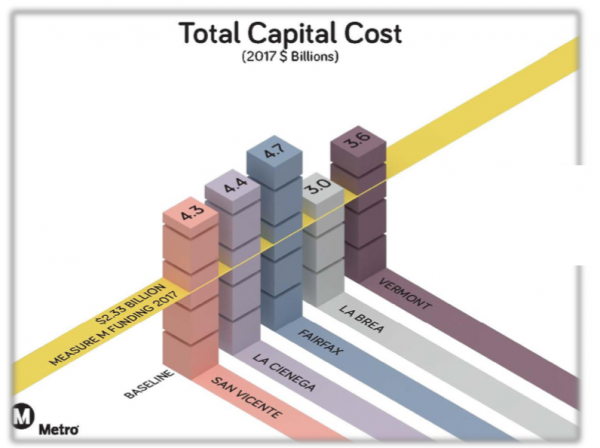 The options outlined in the study are as follows:

— San Vicente. The Crenshaw Extension would run from the existing Crenshaw/Expo station under Crenshaw Blvd. as a subway and then as an elevated train in Venice Blvd. Within West Hollywood, the train would be on a raised track until it reached the Metro Division 7 yard on Santa Monica at San Vicente Boulevard, at which point it would be routed underground on Santa Monica Boulevard toward Highland.

The study notes that that route would take Metro along San Vicente Boulevard through the Sinai and the Beverly Center areas with their regional medical, office, professional and retail center businesses and into the West Hollywood Design District. It also says that routing would provide an “opportunity for redevelopment of Metro Division 7 yard.”

This option would include West Hollywood stations on Santa Monica Boulevard at the Metro Division yard, at Fairfax Avenue and at the West Hollywood Gateway. Those stations also would serve densely populated areas with many businesses.

— La Cienega. This option would run the Crenshaw Extension underground to a station at Venice Boulevard from which it would be on a raised track until near Redondo Boulevard. It then would run at ground level along San Vicente Boulevard to a station at Fairfax and then one at Wilshire. From there it would be elevated above the road into West Hollywood and to the Metro Division yard. Then it would run east underground to La Brea Avenue, at which point it would run north to the Hollywood/Highland Station.

This option would include West Hollywood stations on Santa Monica Boulevard at La Cienega Boulevard and Fairfax and the Gateway on La Brea.

— La Brea. This option would run an elevated train above La Brea from just north of San Vicente Boulevard in Los Angeles to a station on La Brea at Santa Monica, from which there would be either an elevated or underground train to Hollywood Boulevard. It would serve the West Hollywood Gateway shopping center and other businesses and apartment buildings on the city’s Eastside.

—Vermont. A final alternative would run the train underground along Crenshaw Boulevard to Olympic Boulevard. At Vermont Avenue it would head north to Hollywood Boulevard and then west from there. It would provide no stops in West Hollywood.

The options presented to the Metro board will be discussed with representatives from the cities of West Hollywood and Los Angeles and presented at public meetings from discussion before a final selection is made. At that point an environmental review will be commissioned. Metro hopes to begin construction in 2041 and complete it in 2047.

The West Hollywood City Council voted in May to take steps to find additional funds to support the extension. That could be done by issuing bonds. City Councilmember Lauren Meister cast an opposing vote, saying she was worried about what the costs to the city ultimately could be. The Metro board has adopted an “early project delivery strategy,” which uses certain criteria to assign points to projects and rank their priority.

One of the criteria for ranking projects is whether a local jurisdiction is willing to allocate at least 10% more than the required 3% contribution to the local project. Among the other five criteria in that “partnerships” category are whether the area applying for priority consideration will streamline the construction permit process and whether it will establish a tax district to fund at least 10% of the local extension cost.

A memo to the Council from the city’s Community and Legislative Affairs Division says that “… the portion of the Northern Extension of the Crenshaw/LAX Line within the City of West Hollywood is estimated to cost between $1.4 billion and $2.2 billion depending on the final alignment selected after the environmental review. ”

The 3% match thus would cost the city from $42 million to $66 million. To earn points in the early project delivery ranking, West Hollywood would have to commit to contributing 10% more, an amount that would range from $70 to $550 million, depending on the final route of the subway line and the timing of its construction. 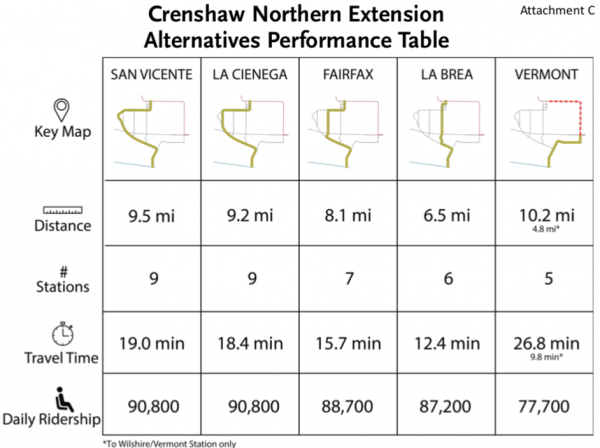 None of these WeHo options is a proper Pink Line. This is rapid transit, not a kid with a crayon and a dream. They should just do the La Brea Line as it moves people from Point A to Point B the fastest. By Metro’s model, to swerve over to WeHo you are increasing transit times by 50% to pick up 5% more riders. Craziness. The Pink Line should really be an east-west line heavy rail line from Hollywood + Highland to Westwood.

Advantage of the San Vicente route include 1) MUCH easier access to the Cedars-Sinai medical complex; 2) ability to use the SV/SM metro yard for construction staging/equipment insertion to accelerate completion of the project; 3) ability to use the taxpayer-owned land there to build AFFORDABLE public housing near public transportation AND get more cars off the road AND redevelop the LASD facility into a joint LASD/METRO police substation; 5) highest additional ridership. 6) better linkage of MORE WEHO Residents and businesses to Purple, Red, Crenshaw & Expo lines By choosing the San Vicente route and using the MTA lot to… Read more »

West Hollywood is one of the biggest destinations in the entire basin and is landlocked with neither direct access to a freeway nor a metro rail. As it is laid out, there is a $2 Billion shortfall to bring rail into West Hollywood. Where will this money come from? This sounds like another Pink Line failure from 2008 all over again

Well some of us citizens are fed up and are working on a plan that we hope to get it to city hall soon. Please join us and/or help get this plan to cuty hall amd metro

I think the Beverly Center, Cedar’s, the design district and Boystown can all be accessed with the commercial La Cienega route. Above ground light rail on San Vicente between Beverly and Melrose would cut through and destroy a residential neighborhood. It simply doesn’t belong outside the front doors of the residences on San Vicente.

Although it’s a residential neighborhood, San Vicente is a thoroughfare. The reason it’s so wide at points dates back to the old street car lines, so there is precedent.

In Rancho Park, the Expo Line cuts through a residential neighborhood (despite initial local opposition.) I haven’t checked, but I’m fairly certain land values increased after the train came through.

Construction to begin in 2041!?
How about a WeHo Electric scooter program instead; I may be dead by the time this is complete -if ever.

some adjustments:
The LaCienega route has a station at LaCienega and Santa Monica Blvd (not the bus yard).

The 2020 date has never been mentioned by Metro. That’s a West Hollywood date that might be a ceremonial ground break if a route is selected by then.

Thanks for catching those errors! The story has been updated to correct them.

“increase taxes on anything”

Glad you have so much money that you can afford to continue pay higher taxes.
This is how govt works; they keep taking from you. 2.2 billion was approved. Now they need twice this much? See how this works. It’s called insanity.

Delays because of NIMBYism drive up the costs because material and labor cost more. That’s what’s really going on here…

There was never a commitment by Metro to build this extension when this was on the ballot, so, no, its not a case of misleading voters.

I like the San Vicente and La Cienega routes. Let’s come up with the money if we can spend 150 million dollars on remodeling the park and 65 million dollars on a library we should be able to find a way to support mass transit projects.

Literally give me anything through West Hollywood. Increase taxes on anything and I’ll pay it. A public transit system that runs through the densest and youngest area is by far worth it.

I fully support the San Vicente Route and the La Cienega Route. What a wonderful legacy for West Hollywood, current resident’s, small businesses and hotel’s…

Let’s make the 2020 accelerated happen. West Hollywood saved the Robertson Lane development and we can do this. The benefits of accessing Cedar’s, Beverly Center areas with their regional medical, office, professional and retail center businesses and our West Hollywood Design District. A legacy well worth the investment. Those who have yet to come will discover OZ of the 21st Century.