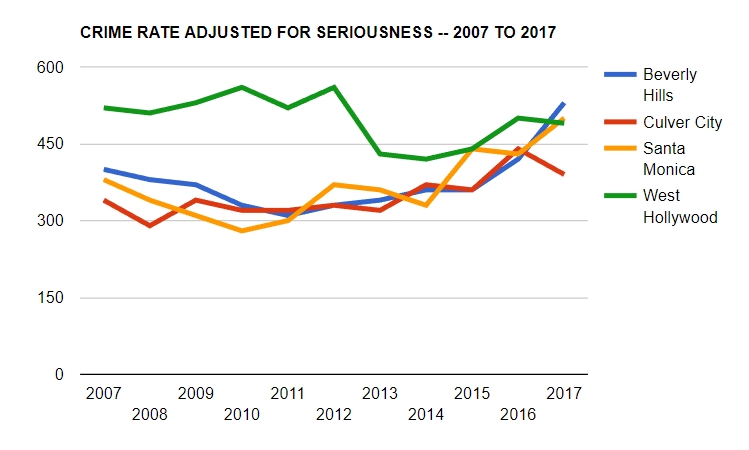 Last year, for the first time since West Hollywood became a city, it had less crime than both Beverly Hills and Santa Monica. That is according to a new report by WeHo by the Numbers based on crime and population data published by the state.

Thefts made up two-thirds of the crimes. Close to half of the thefts (or roughly 30% of all Part 1 crimes) were from vehicles. More serious crimes were less common. The city averaged one homicide a year and two rapes a month. The average week had two stolen cars, two aggravated assaults, two robberies and four burglaries. About a third of the robberies involved a weapon and half of the burglaries were of homes.

The report then switches to a metric that takes into account differences in the seriousness of each type of crime, such as homicide versus petty theft. If, for example, a city’s mix of crimes is 10% more serious than the state average, then the city’s crime rate is adjusted up by 10%. The adjusted rate is expressed per 10,000 residents.

The accompanying chart shows how the gap between West Hollywood and the two nearby cities closed over the last few years. For example, in the final year from 2016 to 2017, West Hollywood crime declined slightly (-2%), while it grew in Beverly Hills (27%) and Santa Monica (15%). Those percentages are based on adjusted crime rates, but growth in the actual crime counts was similar.

To find out more, see the full report, Is crime higher in West Hollywood than nearby cities?

Dave, do you have any information about what was happening in 2012-2013 that resulted in that significant drop in crime in Weho? And then, what might have contributed to the rise in 2015-2016? Would be interested to know more.

I agree. Santa Monica Blvd. does NOT feel safe. The other night a guy high on drugs started yelling at me to get his attention. When I ignored him he started to approach me and said “hey you, come over here.” I walked quickly toward the gas station where there was more light, people, etc. This area needs a major clean up, especially Santa Monica Blvd. There are a lot of new developments (including a new design for the Beanery; I’m surprised WehoVille hasn’t reported that yet. I’m sure they will. It’s on urbanize LA and curbed LA right now).… Read more »

A story about the Barney’s Beanery project was published on WEHOville two days ago: https://staging.wehoville.com/2018/07/25/new-architect-major-change-design-barneys-beanery-project/

Thanks for the link about the Beanery.

Also, this development (not sure if it was reported on here yet).