David Cooley, the well-known owner of The Abbey Food & Bar and its sister bar The Chapel, is calling for a boycott of Alaska Airlines after a flight attendant insisted Cooley’s traveling companion give up a first class seat to accommodate a heterosexual couple. 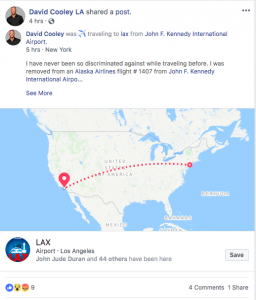 “I have never been so discriminated against while traveling before,” Cooley said in a post today on his Facebook page. “I was removed from an Alaska Airlines flight # 1407 from John F. Kennedy International Airport to LAX to give preferential treatment to a straight couple. After my traveling companion and I had been seated in our assigned seats for a while, we were approached by the flight attendant and my companion was asked to move from his premium seat to coach, so a couple could sit together. I explained that we were a couple and wanted to sit together. He was given a choice to either give up the premium seat and move to coach or get off the plane. We could not bear the feeling of humiliation for an entire cross-country flight and left the plane.

“I cannot believe that an airline in this day and age would give a straight couple preferential treatment over a gay couple and go so far as to ask us to leave. We will never be flying Alaska Airlines or their recently purchased Virgin Airlines Group ever again. Thank you to Delta Air Lines for getting us home safe. If you are an #LGBT person, please spend your travel dollars with an LGBT friendly airline like Delta.”

GayLifeLA.com has reached out to Cooley for more information on the incident and to Alaska Airlines for a response. As of publication we have not received a response from either.

While Cooley reported a poor experience with Alaska Airlines, it generally is ranked as the No. 1 airline in the United States when it comes to customer service.

Alaska Airlines also has a reputation for supporting LGBT causes.  It sponsors Frameline, the longest running LGBT film festival in the Bay Area, as well as the Seattle Gay Men’s Chorus and the Three Dollar Bill Cinema, a film company in Seattle, where Alaska is headquartered.  The company also has set up a resource group called GLOBE [Gay Lesbian Or Bisexual Employees] for LGBT employees and supporters.

It also is known for offering free flights on Alaska Airlines after the Pulse gay club massacre in Orlando, Fla., to the immediate family members of those killed or injured as well as spouses or domestic partners of the victims and their immediate families. Alaska Airlines made a $25,000 contribution to a fund created to assist survivors of the shooting and the families of those killed.

Drama Drama Drama… he likely got bumped because he was upgraded, but forgot to mention that. Why do we always flock towards Drama? If he’s so famous and popular, what’s he doing flying in coach anyway? Think about that 🙂

Lol @ “Please spend your travel dollars with an LGBT friendly airline like Delta.” Delta changed its contract of carriage in 1985 to explicitly exclude people living with HIV and AIDS (at the time, overwhelmingly gay men) from flying with them. Nothing says LGBT friendly like discrimination!

From the airline’s perspective it can also matter whether you made one reservation or two separate ones. I had almost this exact problem on a United flight. I was traveling with a guy I was dating but I had booked our sets in two reservations because for most of the trip we had different itineraries. He had no status (he had no class either but that is another story) so they wanted to take back his first class seat to accommodate a. couple. The United gate agent was very nice and tried to figure things out but we elected to… Read more »

I’d like more information before jumping to conclusions about why his companion was asked to move. They mention they were in Premium seats – on Alaska, this is not first class, it’s the first 9 rows of coach. This includes the first row of coach, just behind first class, which are reserved for people with disabilities. So, if they were seated in row 6, it’s possible that the reason they were asked to move was to accommodate a passenger with a disability. This seems much more likely than Alaska just wanted to give a straight married couple preferential seating –… Read more »

It was unfortunate that Mr. Cooley’s companion was forced to give up his seat.What wasn’t made clear if his companion paid for his own seat or was using travel points to sit first-class with Mr. Cooley.I hope more information is fore-coming about this incident.

In the meantime,Alaska Airlines has a public relations fiasco on its hands that needs to be cleaned up.The Abbey and the Chapel are very popular in West Hollywood.The airline does not need a boycott called by a very influential and well-known man from that city.

LOVE to see the two tickets with seat assignments—something about this doesn’t feel quite right.

Cooley’s ego should’ve made cooled him and made him google search first before blasting his opinion all over. Looks like Karma mat have found him.