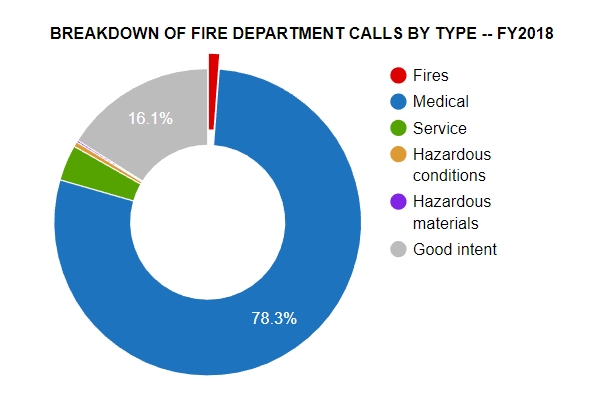 The fire department in West Hollywood went on 65 times more medical calls than real fire calls in the last fiscal year, FY2018. That is according to a new report by WeHo by the Numbers, based on data from the city’s public safety reports.

Only 85 of the FY2018 calls involved actual fires. They were 1.2% of the total, or about one fire call every four days. The number of fire calls ranged between 70 and 110 in recent years. The percentage of the total stayed between 1% and 2%, consistent with nearby cities.

Relatively few of the fire calls involved a building on fire. In calendar year 2017, 14% of fire calls were for building fires, 8% were for vehicle fires, and the remaining 78% were for incidents such as cooking fires or trash fires. Building fire calls happened a little over once a month.

Fire and medical calls are not the only kinds of calls. Service calls were 4% of the total. The report does not offer any West Hollywood-specific examples of these calls. Examples from other places include rescuing animals, closing open hydrants and supporting other government agencies.

A small number of calls — less than 1% — were for hazardous conditions or hazardous materials. West Hollywood examples include arcing wires, downed power lines, and gas leaks.

The final category was “good intent” calls in which no emergency was found. One in six calls fell in this category in FY2018.

To find out more, see the full report, Does the fire department in West Hollywood mostly fight fires?

Fascinating numbers. Thank you for your report.

How & when did fire begin reacting to medical?

It seems like anytime a person trips on a sidewalk in WeHo, there are five police cars and two huge fire trucks there quickly (blocking traffic), yet you never see a cop walking down the sidewalk unless they are going to lunch.

08Mellie
Reply to  John on Hancock

John you could not be more correct. It is ridiculous. I had to make a DCFS call. 3 fire trucks, 2 EMT vans, 4 WH sheriff cars. WHY?

Folks often get billed for this!

More cops should walk the streets as it would be good neighborhood interaction and good for their health.