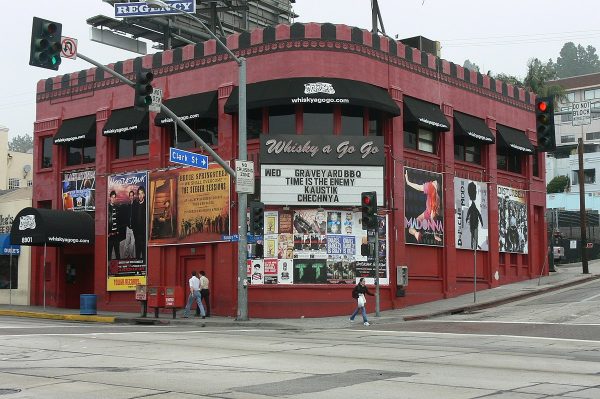 A suspected drunk driver was in custody Wednesday following a crash that injured four people outside a popular West Hollywood nightclub.

Deputies responded just before midnight to the Whisky a Go Go at 8901 Sunset Blvd., and located the four victims, all of whom suffered minor injuries, according to Lt. Hector Mancinas of the Los Angeles County Sheriff’s Department. Three of the injured were transported to Cedars-Sinai Medical Center.

In a statement released this afternoon, the Sheriff’s Department said “the preliminary facts of the investigation indicate that a Volkswagen Jetta driven by Brandon Baker-Grey was traveling northbound on San Vicente Boulevard at a high rate of speed when he attempted to turn westbound onto Sunset Boulevard.  He lost control of the vehicle and drove onto the sidewalk into a crowd of nightclub patrons.”

Baker-Grey has been arrested on a charge of driving under the influence. NBC4 reported his blood- alcohol content was twice the legal limit.

Video from the scene showed the car on the sidewalk, crashed into a metal pole that holds up the awning outside the club’s entrance.

“All of a sudden I just saw people running and I was able to slip back inside,” Richard Wood, a witness to the accident, told NBC4. “This thing (the metal pole) was bent and it looked like this thing (the awning) was going to come down, but it didn’t come down.”

Investigators are asking that anyone who may have witnessed the collision contact the West Hollywood Sheriff’s Station at (310) 855-8850. If you prefer to provide information anonymously, you may call “Crime Stoppers” by dialing (800) 222-TIPS (8477), use your smartphone by downloading the “P3 MOBILE APP” on Google Play or the App Store, or by using the website http://lacrimestoppers.org

Now this is a guy who should be forced to rely entirely on public transit for at-least a year or 2 and, even prohibited from driving a scooter. We are having accidents like this all the time and they want to ban scooters, shouldn’t we really consider banning cars from West Hollywood?

Glad everybody is okay.