Last week was relatively light when it came to serious crime in West Hollywood. There were only eight vehicle burglaries, and on Sept. 27, Sheriff’s deputies arrested a man and woman believed to have been involved in a large number of recent burglaries. They also discovered more than 50 stolen items in their possession.

The report below lists all serious crimes reported to the West Hollywood Sheriff’s Station between Sept. 24 and 30. 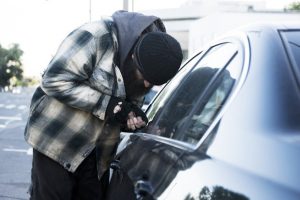 Other Burglary. 8100 block Santa Monica Boulevard between 10:35 p.m. and 2:20 a.m. An unknown suspect smashed the front glass door to gain access and removed a cash register from the front counter. #06376

Other Burglary. 7100 block Santa Monica Boulevard between 10 p.m. and 12:55 a.m. An unknown suspect smashed the front glass door to gain entry but did not take anything. #06374

Vehicle Burglary (Suspect Arrested). 1200 block Fairfax Avenue at 3:45 p.m. A women unzipped the rear window to a Jeep and removed a GPS device. The suspect was arrested by responding deputies. #06365

Aggravated Assault Other Weapon (Suspect Arrested). Santa Monica Boulevard / Palm Avenue at 4 p.m. A man shot another man with a pellet gun. The suspect was arrested by responding deputies. #06386

Other Burglary (Attempt). 800 block North Sweetzer Avenue at 5:28 a.m. An unknown suspect tried to enter the office area but was unsuccessful. #06381

Residential Burglary. 8400 block Fountain Avenue between 7:30 p.m. and 12:20 a.m. An unknown suspect removed two pieces of luggage and personal items from the bedroom of the residence. No sign of forced entry. #06416

Strong Arm Robbery. 1100 block North La Brea Avenue at 2:20 p.m. Two women removed a large amount of cosmetics from a display area and left the store without payment. When confronted by an employee, the suspects threw a plastic container and threatened to hurt the employee. Both suspects fled the area in their vehicle. #06385

Grand Theft. 900 block North Sierra Bonita Avenue between 8 and 10 a.m. An unknown suspect removed property from underneath the front passenger’s seat of the unlocked vehicle. #06408

Armed Robbery. Poinsettia Place / Santa Monica Boulevard at 1:30 a.m. A women was walking on the sidewalk when a man approached her from behind while armed with a handgun and demanded her property. The victim complied and the suspect fled the area on foot. #06399

Strong Arm Robbery. 8900 Santa Monica Boulevard at 2:15 a.m. While standing inside a business, the suspect pushed the victim to the ground and removed his cell phone and cash. #06401

Vehicle Burglary Arrest – A man and a woman were arrested for committing a series of vehicle burglaries near West Melrose Avenue, Santa Monica Boulevard and West Sunset Blvd. A large amount of stolen property was recovered and linked to incidents in West Hollywood and surrounding areas.

Strong Arm Robbery (Suspect Arrested). 1000 block La Brea Avenue at 11:20 a.m. A women was walking on the sidewalk when a man approached her and demanded money. The victim quickly walked away and the suspect continued to follow her and ask for money. The suspect tried to grab the victim, but the victim escaped. The suspect was arrested by responding deputies. #06478

Vehicle Burglary. Spaulding Avenue / Santa Monica Boulevard at 5:30 p.m. An unknown suspect smashed the front passenger’s side window but did not take anything. #06486

Vehicle Burglary. 8200 block Sunset Boulevard between 9:15 and 10 p.m. An unknown suspect smashed the rear windshield and removed property from the trunk. #06492

Vehicle Burglary. 7100 block Santa Monica Boulevard at 9 p.m. A man removed a garage clicker from the front storage area and two painter jump suits from the trunk. The suspect was arrested. #06513

Vehicle Burglary. 8400 block Sunset Boulevard between 9 p.m. and midnight. . An unknown suspect smashed the rear driver’s side window and removed property from the back seat. #06493

Aggravated Assault – Knife. 900 block San Vicente Boulevard at 3 a.m. A man threw a kitchen knife at his roommate during an argument inside their residence. The victim was hit in the face with the handle end of the knife and suffered a small cut. #06502

Aggravated Assault – Other Weapon. Larrabee Street / Nellas Street at 6 p.m. A man swung at the victim while holding a screwdriver in his hand but the punch was blocked by victim. #06514

Grand Theft. 900 block Sierra Bonita Avenue between 7:20 and 7:30 p.m. An unknown suspect ransacked the interior and removed property from the trunk and center console of the unlocked vehicle. #06516