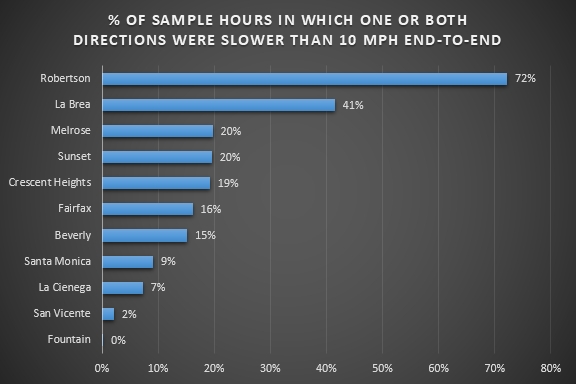 Fountain Avenue is the fastest among 11 major West Hollywood streets, while Robertson Boulevard is the slowest. That is the conclusion of a new report by WeHo by the Numbers, based on a sample of speed estimates spread over two months.

Each speed estimate was based on a computer-generated time estimate for driving from one end of the street in West Hollywood to the other. It included faster and slower parts of each street and time spent at traffic signals. It assumed no speeding.

Robertson Boulevard was the slowest during the sample period. Robertson’s average estimated speed was below 10 miles per hour — a calculation that included early morning hours with no traffic. Even during those hours, average end-to-end speeds did not rise above 15 miles per hour. Of course, individual drivers might go faster.

To compare streets for slowness, the report calculates the percentage of time that each street’s estimated speed was below 10 miles per hour in one or both directions. Robertson came in first at 72%. La Brea was second at 41%. Melrose, Sunset, and Crescent Heights came next around 20%.

The report also identifies the slowest hour of the week for each street in each direction. For all of the streets except Robertson, the slowest hour was during the weekday morning or evening rush. Robertson was the exception: it was slowest on Saturday night at 11 p.m. or midnight.

There was a difference between the slowest streets and those that had the biggest slowdowns from their top speeds. Sunset and Santa Monica led the way on that dimension. Robertson’s top speed was much lower, so its slowdown was not as large in absolute terms.

Fountain Avenue was the fastest of the 11 streets during the sample period. It had the highest average speed and the highest speed during its fastest hour of the week. In general, the streets that were fastest at some point during the week were the longer ones, such as Fountain, Santa Monica, and Sunset.

The report includes snapshots of speed estimates for three high-traffic times during the work week and two on the weekend. For example, at 9 a.m. on a weekday, end-to-end speeds for West Hollywood’s westbound, southbound, and northbound routes were generally 10 to 14 miles per hour. Eastbound routes were faster at 15 to 19 miles per hour. Fountain was faster than alternative routes in both directions.

At the same time, westbound Melrose and southbound Robertson were slower than alternative routes. They were in the range of 5 to 9 miles per hour. The report suggests that this slowdown was caused by drivers commuting through the city, entering on Melrose and then turning down Robertson.

To find out more, see the full report, Which West Hollywood streets are slowest and which are fastest?

Here is the WORST WEHO TRAFFIC PROBLEM which could be easily fixed. Westmount drive from SMB north towards the Traffic Circle is blocked off (as we all know as the cars pile up for Trader Joe’s). However norther of the blockade: is a small half block of small homes. I spoke with a lovely woman who has lived there for decades. She said every night there are at least 100 cars who come from west knoll or westmount and into the traffic circle, ALL SPEED DOWN assuming it’s a through street (all – of course don’t do it on purpose… Read more »

Well on my scooter 🛵I manage to beat all the traffic by driving between all the cars stuck in traffic no matter what street I choose. 😀 When I get to where I want I just use my U shaped lock on the back wheel to lock it to any immobile object and, parking is FREE for me! Why are more people doing this? Oh I forgot the war on scooters as in getting them banned. 😞

Yeah, God forbid you use an alternate form of transportation! For too many in this city, Car is King.

Notice from many postings that I am made to pay dearly for my heresy! 🛵

On a recent Monday curiosity drove me to take a small personal survey of traffic on the 8700 block of Dorrington. Between 0815 and 0845 (approximately), of the 37 cars observed, 20 turned left on Robertson, 11 went directly across to the 8800 block of Dorrington and 6 turned right on Robertson. If Robertson is the slowest mani avenue N/S, these numbers should offer some explanation.

I’d love to see parking restriction extended on Fountain from 3:00 – 7:30.
The sections with parked cars are what make it dangerous and back up traffic.
Adding an hour and a half for a few dozen cars when 40,000 cars use Fountain every day is a no-brainer and will make it safer.

I almost hate to share this (for fear of more congestion), but I usually take Willoughby, pretty much, no matter what, whatever time of day (I also live 1/2 a block from it, so it is convenient). It only goes to La Cienega in West Hollywood, but eastbound to Paramount Studios in Hollywood, with traffic lights to get you all the way through. Yeah, it can back up around Crescent Heights, Fairfax and La Brea, around rush hour, a little bit, but nothing like Fairfax and SMB, for example, where you might wait 4 or 5 traffic light cycles just… Read more »

The report shouldn’t surprise anyone. In a city that is more horizontal than vertical, it makes sense that the 3 east-west thoroughfares are the fastest.