West Hollywood has added five new high-visibility striped crosswalks to Fountain Avenue in response to complaints from residents about traffic accidents on the street. 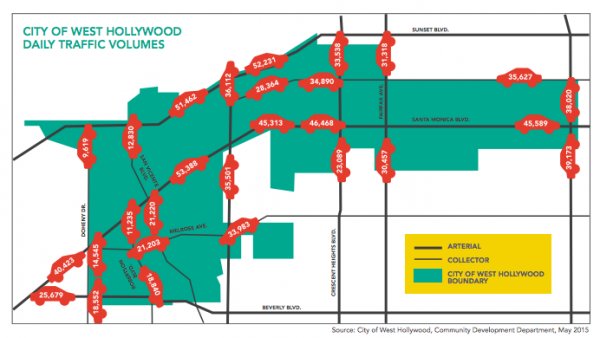 “Additional safety treatments include bulb-outs at intersection corners to reduce crossing distances and enhance pedestrian safety, as well as selected right-turn-only signs in order to reduce potential conflict points. In the upcoming weeks, pavement-embedded lights will be added to the edges of the new crosswalks in order to enhance visibility.”

Traffic accidents on Fountain have been a major issue for some time, with residents’ concerns heightened in September 2017 when a local resident was killed after being struck by a car while he was crossing Fountain near Formosa.

The city engaged consultant Fehr & Peers to look at the traffic safety issues on Fountain. The Fehr & Peers study reported that nearly 66% of trips on Fountain involve drivers crossing through West Hollywood.

A study of traffic accidents on Fountain from 2012 to 2016 determined that 41% of the 179 collisions were “broadsides,” meaning one vehicle crashing into the side of another as a car attempts to cross Fountain from a side street or make a turn onto it. The next largest number (21%) involved rear end collisions, and 14% were head-on collisions. City Engineer Hany Demitri has said an average of 35,000 cars each day drive along Fountain.

The city’s initial focus has been to reduce pedestrian accidents and reduce those broadside collisions by reducing the number of left turns made on Fountain from intersections without stop lights. A map illustrating those collisions shows that they constituted 32% of the 179 total collisions between 2012 and 2016, with most of them involving vehicles headed south toward Fountain.

In addressing pedestrian safety issues, the city has installed several new signalized pedestrian crosswalks along Santa Monica Boulevard and has added bicycle lanes on Fairfax Avenue. The city has installed solar-powered radar speed indicator signs along Fountain Avenue and on North San Vicente Boulevard in order to remind drivers to drive within the speed limit, and additional radar speed indicator signs will be installed on North Doheny Drive in the coming weeks, according to an announcement from the city. In addition, trailer-mounted electronic variable message signs have been placed at key locations within the city to encourage drivers to slow down and abide by posted speed limits.

The city can install all the signs and marked cross-walks they want. However, unless there is a constant and visible Police enforcement they, the signs, etc., won’t matter. Drivers in L.A. have become very aggressive and constantly flaunt traffic signs. And, so do the pedestrians. Driving in L.A. used to be laid-back. God, I miss the 80’s.

I will never understand why West Hollywood is so pedestrian unfriendly. When I first came to WEHO almost 20 years ago there was a death in a crosswalk my first week here. Since then, the effort to improve crosswalk safety has been mediocre at best. There is no consistency in crosswalks. The drivers don’t know what to do, the pedestrians don’t know what to do. The city of Santa Monica has embedding lights in the pavement at crosswalks. We should do the same, plus put “speed knobs” in the pavement 50 feet before a crosswalk to alert the driver. The… Read more »

Traffic humps on Fountain? That would bring an angry mob to city hall to have them removed from a key thoroughfare.

The zebra crosswalks are a good start. Pedestrians not jaywalking and crossing at the light helps.

Santa Monica has a few of the lighted crosswalks, but the majority are normal.

Having a small island in the middle helps pedestrians and keeps traffic flowing. Might be tough on a narrow Fountain Ave.

Got any more hsirbrained ideas?🙄🙄
Weho is not pedestrian unfriendly. Drivers are largely distracted and impatient as traffic squeezes through Weho which has become exponentially magnified w the use of cell phones. Many measures are in placed but not enforced.

While there is room for improvement, and the city has dragged its heals quite a bit, there was some improvement on SMB, where deaths and accidents occurred. The crosswalk at 24 Hour Fitness now requires a light signal, for the pedestrian, not to mention, a much needed left turn lane out of Trader Joe’s and into 24 Hour Fitness. Other crosswalks have been eliminated, such as the redundant one at Ogden, when there was also one at Genesee. They’ve also increased crosswalk visibility and put up warning signs, reminding drivers. I believe there has been a marked improvement on SMB,… Read more »

Thank you for installing these much needed crosswalks. I have a couple of comments concerning the new crosswalk at Formosa; 1 – the crosswalk ahead sign warning drivers of the crosswalk on Detroit (east bound) was installed basically with the Formosa St crosswalk sign. 2 – the yield here to crosswalk sign at Formosa (east bound) and the “share the road” sign are obstructed by the home owners giant bougainvilleas. 3 – the streetlight which is normally on the north side of Fountain was destroyed in an accident a few months ago. It’s still missing and it provides the light… Read more »

Way to go, WeHo. We had only one major accident at Hayworth and Fountain on the weekend at the newly high visibility crosswalk. 🙄

There has been a crosswalk at Hayworth and Fountain for years and years. Are you contending that them making it more visible caused this accident? Seriously?

There has been a right turn only sign on Curson and Fountain for I don’t know how long. PEOPLE IGNORE THE SIGN. Every single day, I see people go straight across Fountain or make left hand turns at that intersection. It has been that way for years.

If I can get their attention and point out that it is right hand turn only, they say they didn’t see the sign. It is very prominent. It is not hidden. People don’t read signs.

Oh, one more thing- those paddle signs in the middle of the road are so annoying!

The proposal is to have islands in the middle of Fountain, which will make it impossible for cars to make a left turn on to Fountain. I don’t know when those are scheduled to be built, or if some have already been installed. That’s the only way they can prevent this. I believe the recommendation was to put these at the most accident prone intersections.

Enforcement appears to be the only way to make Fountain a safer street. The city did not go far enough in this expensive Fehr & Peers study. Will we need another study to enlist enforcement by radar and other active patrol? Word will spread after aggressive ticketing and Fountain may become known as “speed trap alley” but so be it. The city plan also did not go far enough to prohibit left hand turns from Fountain which should be illegal at any intersection other than ones with a signal. Yes the striping, bulb outs and crosswalk paddles look fresh and… Read more »

I wish the City would make cross streets at Fountain “right turn only” vs cars that cause chaos by trying to cross Fountain on blocks that don’t have traffic lights.

They have addressed this issue, and places where common accidents like this occur, such as Havenhurst, are going to have islands in the middle of Fountain, which will make it impossible for cars to make a left turn on to Fountain. I don’t know when those are scheduled to be built, or if some have already been installed.

This is unfortunately wishful thinking. There are extremely aggressive drivers on Fountain. They know there is little or no enforcement by sheriff or radar and drivers speed, weave, drive in oncoming lanes and things you wouldn’t believe. Add to that texting or on cell phones and there is disaster. Islands will be run over as they frequently are now on streets with roundabouts. Any SUV can run over the top with our endangering their vehicle.

OK, a SUV can, but what about most other cars? I know there are aggressive drivers on Fountain, and there definitely needs to be more enforcement, but you don’t think islands are going to make any difference, whatsoever? Studies show otherwise.

Looking at Wilshire in Santa Monica as an example, people still try to make left turns, blocking traffic from moving on Wilshire

Useless. I almost ran over someone who darted across one of these.

So that one person makes these “useless?” Overall, I can only think that these will prevent accidents.

Great, we all remember how well these cross-walks worked on Santa Monica Boulevard BEFORE lights had to be installed. Is this some kind of sick joke by the city to actually see how many people need to get killed before correcting this, too? SMH

Thank you for this, much needed.