The price of progress for a thriving small city like West Hollywood is that the past – the city’s history – is constantly being erased. There’s no better example of this than the wiping clean from the city’s collective memory of a once vibrant legitimate theatre scene in central West Hollywood.

Over the years hundreds of actors performed on the old theatre district’s stages. Some were seasoned pros already known for their stage and film work. Others were unknown at the time who went onto have successful movie careers. The majority who found fame later, however, became household names by starring on television in the 1960s.

What follows is an overview of the theatres from the old district, including noteworthy plays produced there along with the names of actors, directors and producers who became familiar names in television and film and the stage. 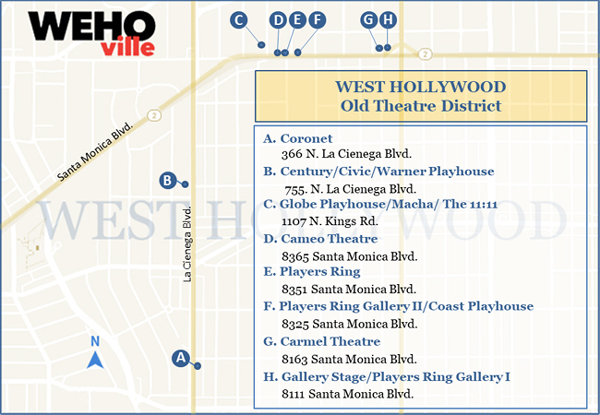 The first of the theatres was The Coronet (A), which opened on La Cienega Boulevard in 1947. It continued to serve as a playhouse until 2008 and remains active as a performance space today. The next theatre to open was originally called the Century (B). It launched in 1949 with the backing of investors that included some of the biggest names in Hollywood, from Clark Gable to Ronald Reagan. It changed names in the 1950s to the Civic Theatre, later became the Warner Playhouse and eventually an adult movie house. There is a restaurant there today.

But the centerpiece of the old West Hollywood theatre district was the Players Ring (E), on Santa Monica Boulevard. at North Flores Avenue. Also launched in 1949, it was groundbreaking for its day in that it presented plays in the round. The Players Ring was so successful by the 1950s that its producer-owners, Paul Levitt and Ted Thorpe, added two nearby theatres to the organization, the Gallery (H) at Santa Monica and Crescent Heights boulevards – which they renamed the Players Ring Gallery – and the aforementioned Civic Theatre on La Cienega.

The oldest theatre was the Carmel/Fox Theatre (G), on Santa Monica Boulevard between Crescent Heights and Havenhurst, a small but elegant movie palace built in 1924. For a year or so in 1957-58, it was converted into a legitimate theatre called the Carmel.

In 1960 another group of actors opened the Cameo Theatre (D) next door to the Players Ring that presented comedies in the round.

A year later, the county demolished the original Players Ring Gallery to make way for widening the intersection at Crescent Heights. Producers Levitt and Thorpe moved the Gallery to a 1925 storefront they’d converted into a theatre two doors east of the Players Ring. The venue changed names several times over the years, but eventually it came to be called the Coast Playhouse (F). Still standing today, the Coast was purchased by the city of West Hollywood in 2016. It is currently dark for the most part, awaiting renovation.

The Players Ring theatre at North Flores was destroyed by a fire in 1964, and it and the Cameo Theatre next door were razed to make way for a retail development, the shopping center at Santa Monica and North Flores Avenue where Hollyway Cleaners, Earthbar and a restaurant are located today.

The final addition to the theatre district is still standing, like the Coronet and the Coast – and like the Coronet it is still active as a performance space. Established as the Globe Playhouse (H) in 1973, the steel-clad building located off Santa Monica Boulevard on Kings Road was later home to the Macha Theatre for many years. Earlier this year it was acquired by the 11:11 Experience, which will present plays as well as other entertainment events.

Next: Vanished Venues 1: The Coronet Theatre.

Another famous stop for celebrities was the Turnabout Theater, located on La Cienega between Santa Monica and Melrose. Three gay men originally known as the Yale Puppeteers had a theater from about 1941 through 1956 that featured a stage at each end of the building with Red Car seats that flipped over. The show started on one stage, and the guests would flip their seats during intermission and the show would proceed from the other stage. They were noted for making puppets of the notable figures of the day, from Charlie Chaplin to political figures of WWII. Many of the… Read more »

Jon baby, “In Hollywood we call everybody baby, baby!!” A fantastic story, but you forgot the Pussycat Theater. #comedy

I produced a musical All Men Are Dogs at The Coronet in the small ground floor studio across from the bar. Upstairs was a one woman nun show, I forget the name. In the main theater was… Puppetry Of The Penis.

On a Nazimova note, I added new music to Salome & Camille. Email me for the link if you’d like to see them.

I appreciate history sharing articles like this. Thank you to the good people of Wehoville for connecting us to current events and our important history.

From the pictured 8 famous actors posted I can’t help but to wonder if any Non-white actors performed on the old theatre district’s stages? Yes California passed Civil Rights Laws going back the 1890s against de jure segregation when it came to public resources (with no protection from racism in the private sector) but, we do clearly see an active de facto segregation as a part of Los Angeles’s Jim Crow history that many conservatives seek to deny! What about Sir Sidney Poitier? He was around at the time and, his contributions were hardly insignificant. Many of the courageous works… Read more »

Yes, we cover several productions that starred African American actors. An all black cast appeared in “Simply Heavenly,” with book and lyrics by Langston Hughes, at the Carmel in 1957. Greg Morris starred in “Purlie Victorious” at the Players Ring Gallery in 1961. Two controversial one acts by LeRoi Jones, one of which starred Paul Winfield who later won an Oscar for “Sounder,” played to sold out houses at the Warner Playhouse in 1964. And Yaphet Kotto essentially launched his career in Hollywood when he starred in “The Zulu and the Zayda” at the Warner in 1968. There were others… Read more »

Thank you for your thoughtful and informative reply, it’s truly appreciated! 💗

Good article. However, West Hollywood wasn’t a city until 1984. Sounds like I’m nit-picking? Maybe, but, it’s a valid point. IMO