That moment when you approach your car four minutes after the meter has expired and find a ticket tucked under the windshield wiper. Beginning Dec. 1, you’ll have five minutes to scramble to the meter and bump up the parking payment to avoid a ticket. 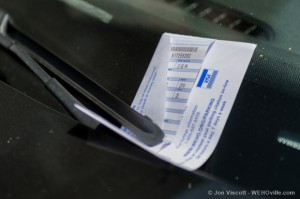 The goal of increasing the grace period? “… To promote the City of West Hollywood as a parking friendly location where people are encouraged to visit, shop, and explore,” says a memo to the Council from the city’s Facilities and Recreation Services Department.

Last year parking enforcement agents issued 60,000 citations for expired meters. The Facilities and Rec memo estimates that 7% of the citations fell within the three to five minute range. “Staff believes that for this time range, the proposed grace period will help approximately 4,000 residents and visitors avoid being in violation and still ensure that the parking meters generate the turnover of parking spaces that businesses depend on.”

That means a savings of $212,000 for those who would otherwise have to pay that $53 ticket. The extension of the grace period from three minutes to five minutes would mean an estimated loss of $80,000 in parking fines for the city.

Thanks . Nice to see we have humanized these meters even as rates increased.