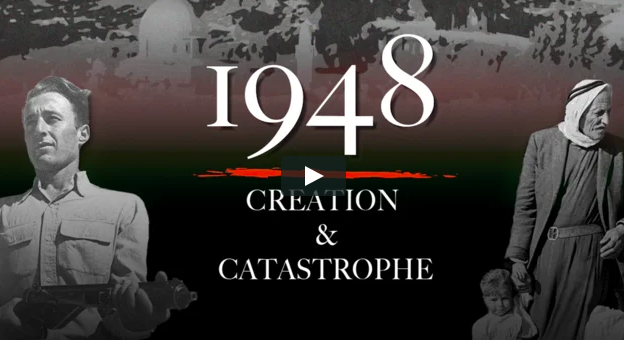 Confronted with criticism from Rabbi Denise Eger and other members of the city’s Jewish community, the City of West Hollywood has postponed plans to co-host “1948: Creation & Catastrophe,” a documentary about the founding of modern Israel and the Israeli-Palestinian conflict.

The documentary was to have been screened on Dec. 12 at the West Hollywood City Council Chambers as part of the city’s Human Rights Speakers Series. It was to have been followed by a panel discussion including Andy Trimlett and Ahlam Muhtaseb, co-producers and co-directors of the documentary.

Asst. City Manager David Wilson announced the postponement at the City Council meeting tonight in response to a question from Councilmember Lindsey Horvath. Wilson said city staff would discuss the reaction to the proposed screening and work with the producers of the film.

The documentary’s website says that “1948” (a reference to the year the modern state of Israel was founded) “tells the story of the establishment of the state of Israel through the eyes of the people who lived it.”

“It is simply not possible to understand what is happening in the Israeli-Palestinian conflict today without an understanding of what happened in 1948. This documentary was the last chance for many of its Israeli and Palestinian interviewees to narrate their first-hand accounts of the creation of a state and the expulsion of a nation.”

The documentary has been criticized by some who see it as being anti-Israel and have called out co-producer Muhtaseb for comments she has made about Israel. Muhtaseb is a professor of media studies at California State University, San Bernardino, who has done field work in Palestinian refugee camps in the Lebanon, Syria, and Palestine.

In an email message to council members on Friday, Rabbi Eger of Congregation Kol Ami said: “I am shocked that the City of West Hollywood is allowing this piece of anti-Israel propaganda to be shown on city property … This in our city with a sizeable Jewish population The film ‘1948’ is unbalanced and nothing but propaganda..

“The person who is a producer for this so called documentary is a well-documented anti-Israel anti-Semitic professor who regularly attacks Israel and the Jewish people … I am urging you the members of the City Council to cancel this event. In a time when the Jewish community is under heightened threats of violence following Pittsburgh, and when a Muslim anti-Israel activist tried to run over Jews last Shabbat on La Brea as they walked home from synagogue –allowing this film to be shown at this time and the anti-Israel speakers to foment hate in our city is irresponsible. “

Eger called out Muhtaseb for her support for the “Boycott, Divestment, Sanctions” movement, which calls for people and governments to boycott Israel and divest from investments in Israeli companies. She also accused Muhtaseb of taking a sympathetic view of Omar el-Abed, a Palestinian man who in July 2017 broke into a home and stabbed three Israelis to death as they were celebrating the Sabbath and the birth of a new grandson. And she said that in July 2017, Muhtaseb put a post on her Facebook page “urging her friends to sign a petition condemning pro-Israel activism and alleging a conspiracy aimed to ‘repress Palestinian rights activists here in the US.’ The petition went on to claim that ‘Palestine activists at San Francisco State University have been under attack for years’ by pro-Israel advocates.”

Eger isn’t the only one who expressed concerns about the screening. For example, Tyler Gregory, the executive director of A Wider Bridge, an organization advancing LGBTQ equality in Israel, wrote to council members saying “it pains me to hear that the city plans to screen ‘1948’ on December 12th, a film that seeks to undermine Israel’s right to exist. The Israeli-Palestinian conflict is something deeply personal to many residents of West Hollywood, and this film lacks the balance and nuance needed to properly engage the community with these issues.”

City Councilmember Lindsey Horvath raised the issue of the Dec. 12 screening with David Wilson at the City Council meeting. Horvath, in an interview with WEHOville, said she respects the right to free speech, which she sees as creating a safe space for the discussion of issues and ideas. But, she said, when “we give license to people who advocate for eliminating Israel, we are creating an environment where people feel unsafe.”

“We don’t need to become a refuge for hatred,” Horvath said of West Hollywood. “We want to be a refuge, a safe space, where people can live their lives.”

Horvath also has expressed concerns about plans by UCLA to host the National Students for Justice in Palestine Conference last month. “SJP is known for organizing sensationalist, anti-Israel protests and events on college campuses,” Horvath said in a letter to UCLA Chancellor Gene Block. “According to recent accounts SJP members have posted violent, anti-Semitic rhetoric on social media, ranging from calling for the annihilation of the Jewish people to the admiration of Adolf Hitler and hateful calls for violence.”

While Wilson said the “1948” screening was being postponed, Eger said that wasn’t enough. In an email message to City Manager Paul Arevalo, who wasn’t at tonight’s city council meeting, said she hoped the city could “put this film to rest.”

“The producers of this film are virulent anti-Israel advocates,” she wrote. “And the movie they have made is filled with errors and outright lies. I was under the impression that if the city wanted to have a discussion about the complexity of Israel and Palestine then we ought to have different kind of discussion. This film is throwing gas on a fire.”

“Let Future Generations Understand the Burden and Blessings of Freedom”

I have lived in Weho since 1994. This city is one of intellect and ideas. Open, many times controversial discussion is how many of us get a take away. The film should be screened and both sides MUST BE REPRESENTED. Then let the audience become enlightened. I’m not sure I will like this film or its message, but now I MUST SEE IT. (fyi—no relation to dennis palmieri, the events producer)

Agreed, in accordance also with my comments below of Dec.4 & 5. But there may be more than “both sides” as perhaps the film (and I’ve not seen it) presents a complicated picture of more than just two points of view and multiple historical interpretations.

If officialdom of West Hollywood continues to bow to parochial concerns and pressures of one group or another every time it evaluates the art it sponsors, the city should remove all references to progressive in the way it presents itself to the world. Civil discourse and debate based on intellectual curiosity are progressive values. Censoring it is not. We have developed a culture in which there is intolerance of free speech on all sides; we shout down ideas with which we disagree; we disinvite speakers or cancel movies; we tolerate a university culture in which trigger words are banned, and… Read more »

I agree. It is clear Americans are not seeing what is going in Israel. There is certainly a need for public discussion. CNN has just fired someone for bringing a presumably critical point of view. This is no longer the spirit of democracy. Both sides of an issue should be shone. The trouble is big money determines what we are allowed to see.

For us to have a democracy we must be open to all sides. There can be certain standards for presentation but not outright barring of material that happens to offend one or another group.

Dear All, (with reference to below Dec. 4 comment) This in essence has nothing to do with Israel-Palestine but with the Rabbi’s arrogant assumption that at least one member of WeHo City Council is susceptible to such pressure to censoriously deprive our community of an educational/debatable experience. What’s next? Any number of other religious groups exerting influence on Council Members? Priests and Imams lobbying fragile Council Members for blockage of programs and policy? Council Members feeling free to intimidate, as Horvath is documented to have attempted, the UCLA administration? Council Members claiming historical/academic, even medical, expertise of which they know… Read more »

It is simply stunning that folks would presume to interject ignorance and prejudice into an otherwise enlightening opportunity for the community and beyond. This is not a path towards resolution.

A Guide For The Perplexed – updated edition – should soon be available to all who respond to this article.

The Palestinians don’t want peace. They want nothing less than the complete annihilation of Israel. They’ve demonstrated that many times.

Wouldn’t you want your family’s home back, if you were them?

As a professor of modern Middle Eastern history who specializes in Israel/Palestine, speaks fluent Hebrew and Arabic, has written and edited a dozen books on the subject, and has actually seen the film, I can say that it is a scholarly, balanced attempt to encourage thoughtful reflection and share verifiable knowledge about the early years of the world’s most intractable conflict. The attacks on it by people who have not and literally could not have seen the film (since it’s not been released publicly and is only accessible by secure server) is disgraceful. That people calling themselves “rabbis” would make… Read more »

West Hollywood yet again shows itself to be a fake liberal fiefdom where honest open history and discussion is suppressed when it is politically inconvenient for the Poobahs and Potentates sitting on the city council. Genuflecting to anti democratic social pressures.Lindsay Horvath and the rest should be ashamed of themselves.

James Rosen, Proud assimilated atheist Jew who stands with “Peace Now” and “If Not Now When” against the fundamentalist interpretation of the foundations of the State of Israel. Show the Film

Now I MUST see it. You actually gave the film some great PR. Do we really want to be a city that burns books and has censorship?

An open letter to Councilmember Horvath and others: Please read some history and cite your sources before telling this respected historian (yours truly) that the Wehoville article offers reliable “background,” which it does not pretend to do, on the “1948” film,. Have you even seen the movie? This reminds me of your inane proposal that the admittedly odious candidate/now president Donald Trump not be permitted to speak in West Hollywood. If you had ever mouthed such nonsense, as I heard on the video of Monday 12/3 evening’s Council meeting, in any of my USC or Cal Arts classes I’d have… Read more »

This film sounds very important. As US taxpayers providing funding and a UN Security Council veto that enables the systematic denial of human rights to Palestinians  — including racist settlements that steal more and more land in violation the Geneva Convention and a denial of the right to return — we have an obligation to open our eyes to reality. Palestinians neither have equal rights in Israel, nor do they have self determination in Gaza or the West Bank. Israel has factually prevented Palestine’s right to exist. Where’s the criticism of that? Also of note, given it is a government official… Read more »

In this world, the Palestinians have no rights.