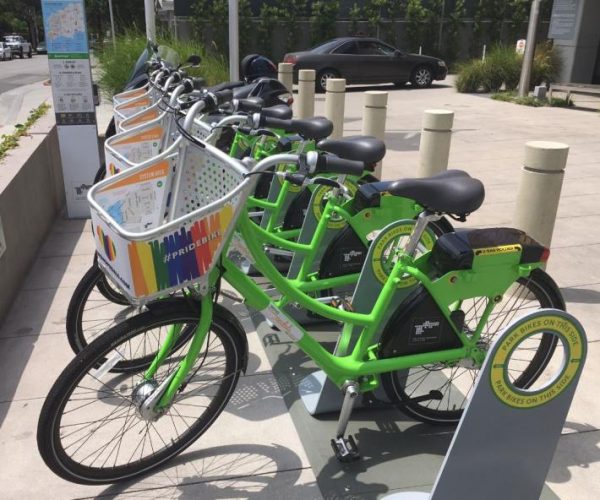 The West Hollywood City Council on Monday night agreed to shut down the WeHo Pedals bike share program. But not yet.

Council members John D’Amico and Lauren Meister had brought the proposal forward, noting that WeHo Pedals has lost considerable money and its bikes aren’t being used often. The program was launched in August 2016 and offers 150 bicycles that can be rented with a smartphone app at 21 stations around the city. The program has been managed by CycleHop LLC, an outside contractor. A memo to the council noted that the system averages only 45 trips a day and the average cost to the city is $25 a trip.

In a four-to-one vote, council members last night agreed to ask city staffers to begin the process of ending the program. They also asked that staff report seek the Transportation Commission’s review of another option, a dockless bike share program operated by an outside contractor. The city’s Parking Services Division and Long Range Planning Division were asked to research and develop a dockless bike share pilot program, including information on how other cities were operating such programs. The council did not authorize the use of dockless electric scooters, which previously had been banned.

Councilmember Meister asked that city staffers also take a look at long term options for making the city safer for bicycles, which would require a change in its infrastructure given that West Hollywood has few dedicated bicycle lanes. Kevin Burton of the West Hollywood Bicycle Coalition said the lack of bike lanes is an issue when it comes to encouraging that form of environmentally friendly transportation.

Mayor John Duran voted against the proposal, saying that he wanted the city to engage an outside contractor to research and develop the dockless bike share program.

The City Council also last night approved a proposal to regulate “cash for keys,” the practice of landlords paying tenants to move out of their rent-stabilized apartments so that they can raise the rent to market rates.

A report from the city’s Administrative Services Department stated that “some landlords are offering to buy tenants out of their tenancies in order to raise unit rents to market rate for a new tenancy or to avoid the restrictions on rent following no-fault evictions, such as Ellis Act evictions. Since the recovery of the rental market following the Great Recession, staff has received reports of an increase in such offers.”

The ordinance approved by the council requires landlords to inform tenants of their rights when offering to buy them out and give them a 30-day period to rescind their agreement to such an offer. Other protections include requiring landlords to let the city know when a tenant is bought out of his or her lease.

How about letting the electric bike and scooter companies come in and pay the city for additional bike/scooter path infrastructure instead of subsidizing bikes no one uses?
Banning them has clearly done nothing positive.
Take the lead from Santa Monica, who has reeled in the initial chaos with regulations that actually are starting to work and make the “last mile” commute and local trips more convenient without cars.

Perhaps they could replace them with…say, a network of electronic scooters that requires no infrastructure subsidy at all from the city and has a proven track record of popularity with residents and visitors. Wait, never mind, we can’t do that because the scooter companies once hurt some city council members’ feelings.

While they make the city look progressive lined up on the sidewalk it’s irresponsible for the city to promote the program in such an unsafe environment. It’s not unlike the scooter controversy. Another bad idea from John Duran.

It was well-intentioned, and it came very close to serving the need. I was a happy user, paid $99 for the yearly service for a year, and maintain my account on a per-use basis still. It just comes down to the deep unfriendliness of the WeHo landscape to bicycles and bicyclists – there was no place I could get on the bikes that I couldn’t walk to and get there albeit a little slower but without fearing for my life. I think as more people use the e-scooters (despite the council’s resistance), we will make room for two-wheelers of all… Read more »

You said it….no place that you couldn’t walk to.

Somebody made big bucks over this idiotic boondoggle. Did any City Council member have a hand in the bucket? Who even though these bikes would ever be used? It was always a Duran “new urbanist” scam.

I want to know who’s idea this was in the first place? Who brought this to council as an agenda item to start the bike program. Its been a huge drain of tax dollars that could of been used for greater service to the community. It’s time to face the reality and remove this program