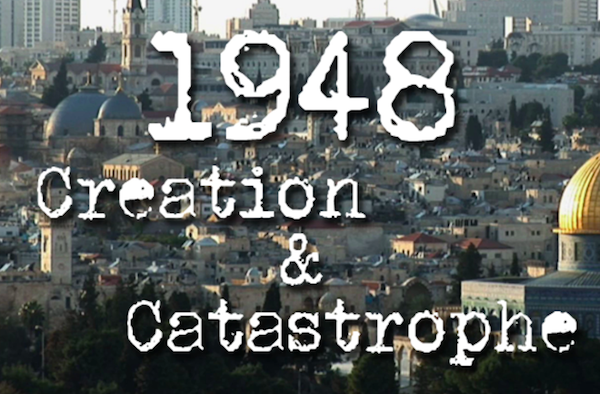 Tonight, Wednesday, December 12, in keeping with its image as a progressive leader in social policy, the City of West Hollywood was to have hosted a film screening and panel discussion on the painful birth of Israel and the Palestinian refugee crisis. Instead, the city is playing censor, “postponing” the event until further notice.

The screening and panel, which I was invited to join, was part of West Hollywood’s Human Rights Speaker Series and co-sponsored by PBS SoCal. It was to feature the new documentary, “1948: Creation and Catastrophe.” But after spurious allegations of anti-Semitism by a local rabbi, the city pulled the plug. City Councilmember Lindsey Horvath said she didn’t want West Hollywood to become a “refuge for hate.”

But the real issue here, as it is increasingly in public forums and the media across America, is who gets to tell the story. West Hollywood is taking the word of a constituent with a keenly vested interest — Rabbi Denise Eger of West Hollywood’s Congregation Kol Ami, a staunch supporter of the American Israel Public Affairs Committee and its efforts to lobby Congress and silence critics of Israel, often by accusing them of anti-Semitism. Rabbi Eger appears to have cut and pasted such accusations against one of the film’s producers, Dr. Ahlam Muhtaseb, communications professor at Cal State-San Bernardino, directly from Canary Mission, a shadowy blacklist that targets critics of Israel. As The Forward reported in August, the anonymously-funded Canary Mission “is now being used as an intelligence source on thousands of students and academics by Israeli officials with immense power over people’s lives.”

And so the West Hollywood City Council appears to be playing directly into a specific, AIPAC-driven political agenda that conflates legitimate criticism of Israel with anti-Semitism. Calling someone an anti-Semite is often a club to shut down open discussion. It’s often effective. But it is a direct threat to free speech. It’s long past time to stand up to this anti-democratic agenda.

The disingenuous claim that the “1948” film is anti-Semitic or promotes hatred is part of a broader effort to narrow the boundaries of “acceptable” discussion of Israel and Palestine. Recently the commentator Marc Lamont Hill was fired by CNN for daring to suggest, in a speech at the U.N. depicted in the video below, that the Holy Land would eventually become a single state from the Jordan River to the Mediterranean. Provocative, yes, and troubling to many, but after decades of Israeli settler colonization of the West Bank finally undermined the “two state solution,” a single, democratic state of Israelis and Palestinians is hardly an idea to be muzzled by the thought police.

Even more troubling are the broad efforts to slap the anti-Semitic label on non-violent, constitutionally protected calls to boycott Israeli institutions. The Boycott, Divestment and Sanctions movement, which has gained momentum in recent years, has prompted dozens of state laws and bills in Congress to impose civil and even criminal sanctions against groups that boycott Israeli products or institutions.

Some say the fears provoked by the recent wave of anti-Semitism, including the murder of 11 Jews in Pittsburgh’s Tree of Life synagogue, is reason enough to curtail criticism of Israel. As someone who has spent years working in Israel, and many hours interviewing Holocaust survivors for an oral history project of the U.S. Holocaust Memorial Museum, I have long known those fears to be real and legitimate. But exploiting that fear can be cynical. It is not legitimate to label critics as anti-Semites when they advocate a boycott of, say, Caterpiller, whose Israeli military D-9 bulldozers have demolished many of the 48,000 Palestinian homes and other buildings reduced to rubble since 1967.

As for “1948”: It is not clear whether those involved in West Hollywood’s “indefinite delay,” as one organizer calls it, have even have seen the film. I have. It is fair and even-handed in telling a wrenching, difficult history both from the perspective of Israelis who saw the 1948 war as their War of Independence, and from Palestinians who experienced it as their Nakba, or Catastrophe. The film includes stories of expulsions of Palestinians, which have been well-documented by Israeli historians. I did much the same in my 2006 book, “The Lemon Tree.” What the “1948” film does not do is simply repeat the triumphal narrative conveyed in a book many Americans grew up on: “Exodus” by Leon Uris, which describes the birth of Israel in exclusively heroic terms, with consequences to “the Arabs” (i.e. Palestinians) missing from the story.

For some who grew up with the “Leon Uris history,” the deeper, more inclusive narrative can be difficult to accept. Yet isn’t the role of a democracy to promote open, difficult debate, and to help us face our collective history? The Dec. 12 forum was an opportunity, especially in West Hollywood, which takes pride in its “impact on the national progressive public policy agenda.” Instead the city has placed itself, unwittingly or not, on one side of the debate, electing to stifle free speech and open discussion, which should be at the heart of our democracy.

For those interested in having your voice heard and refusing to accept this baseless attempt at censoring free speech, there are two things you can do: 1) Message the West Hollywood city council directly via their Facebook account: https://www.facebook.com/wehocity/ 2) Show up to the city council meeting this upcoming Monday, where they will be discussing the Airbnb proposal along with other many important issues. As individuals, all we can do as talk. However, acting together is the way to pressuring the council to do the right thing! The link below provides the meeting date and time, along with an agenda:… Read more »

I have been in communication with the City of West Hollywood, as have many other activists, since we first heard of this. They have been quite responsive. I have received two emails and also a telephone call from an Andrew Campbell, their Arts Manager. He said that he has watched the film and thought it was very good. He has compiled a list of people who have complained and will inform us when it is rescreened. While this is nice, it should never have been “postponed” in the first place. We will continue to monitor the situation.

We are proud to host a screening and discussion this saturday December 15,
https://www.eventbrite.com/e/screening-1948-creation-catastrophe-w-co-director-ahlam-muhtaseb-tickets-53492298906

This is an open invitation for Council Member Horvath to step up present her case to the readers, presumably her constituents. Since Rabbi Eger presumes to hold sway over the residents as well, she is also invited to present her case.

Please request that they illuminate their information in an enumerated rather than narrative fashion with the requisite factual support. This will be useful information to review while we are waiting for David Wilson or whatever city entity makes a further determination on the film viewing.

Cancelling this screening at this point would be cowardly and a sad reflection on the City Council’s lack of authentic progressive values. If we as a country are going to survive the era of Trump with our democratic values intact, we need to be vigilant in protecting the First Amendment. This sort of pre-censorship will only take us down a dark road. I would implore my friends who have raised objections even though they have not seen the movie, to direct their focus on fostering an open debate on the merits of this film after we have seen it. We… Read more »

One can’t debate the merits of the film until one has watched the film. The point of this discussion thread is the shameful acts of bullying which succeeded in shutting down the screening and the panel which was formed to discuss the film in an open forum. Instead, West Hollywood officialdom has “postponed” (can’t wait to see how that is defined) the screening and the panel in an equally shameful act of government censorship of art. Perhaps the film will ultimately be screened in a private venue, either in or out of WeHo. Anything short of the originally planned program… Read more »

Just for a point of clarification, while Rabbi Denise Eger works in West Hollywood, she is not a West Hollywood constituent as she is a resident of Los Angeles.

Preventing information from being examined and open to discussion is an attempt to game our democracy. Are the naysayers who were instrumental in preventing this film from being shown demonstrating God-like behavior regardless of one’s religious affiliation? One would think not, especially when there is the ability to conveniently play either the race or anti-Semitic card in this instance.

There is an opportunity in this community to create a ripple in the suffocating tide of oppression. It takes more than talk….it takes doing.

I don’t know if this blog allows links, but I suggest that you watch this (Google it). I found it on wikileaks and it shocked me to the core. I support individuals trying to have a good life, practice their religions, etc. but I don’t support massive corruption by governments that steal their religion to push their criminal behaviors. Peace.

If this link is allowed, I highly recommend everyone watch this. It’s 4 parts, but if you want to jump right in, the final 2 parts are enough to get an education on what’s going on and what they’re trying to cover up. The film that the US-Israel Lobby Doesn’t Want You To See

I’m a member of The Order of St John of Jerusalem. A charitable organization that operates an eye hospital in Jerusalem. Many of the eye donations done in Tel Aviv need to be transported quickly to Jerusalem for transplants etc. The Israeli government will purposely delay the ambulances in transporting them at checkpoints leading into Jerusalem. Let’s get real here. The Israeli problem is the whole reason we’ve lost thousands of soldiers in the Middle East. Otherwise we wouldn’t be there. Who would be there? As for Horvath or any of these political hacks telling me what to watch on… Read more »

If so many things are hidden from view, from examination, from truly open discussion, how are we to become that which every formal religion, every politician quoiting his view of our Constitution believe we should be? The days of the Catholic Index and the Watch and Ward Societies and other forms of thought suppression are supposed to be far behind us. How are our children to learn anything about each other if we constantly close doors to understanding what we might deem as foreign? I sentence everyone who reads wehoville.com to 30 hours of watching Mr. Rogers’ Neighborhood. There will… Read more »

Councilperson Ms Horvath should definitely not be reelected. This woman continues to grandstand all the time. She opens every weho city council meeting with: “I visited this group… I was at that event. I was at this conference… me, me, me… Blah blah blah.” Obviously, she has no time for her own work. Whatever that is? However, she’s very open to accepting major donations from white male real estate development firms. Represented by the white male Lobbyists that hang around the city council to get everything they want for their clients. Frankly, this has to be one of the most… Read more »

It’s time to screen the movie and have the panel discussion. Councilmember Horvath, with her grandstanding banning of donald trump, and this shameful act of shutting down the free exchange of ideas, provides for me an understanding of the genesis of the term “snowflake” in a social media-driven platform of public discourse. Let’s stop calling it censorship, it’s bullying, pure and simple, by people using their platforms as legislators and faith leaders to shout down the honest pursuit of inquiry. It happens on all points on the political spectrum, on all topics. That it happens in West Hollywood, with the… Read more »